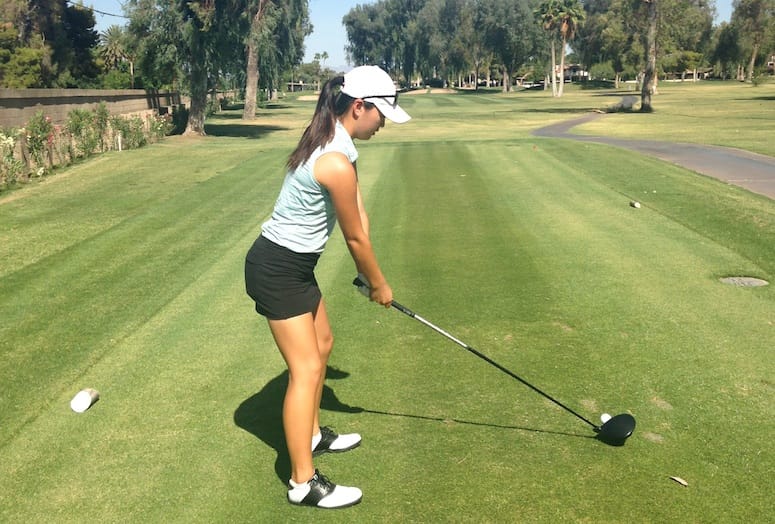 It's an atypically-temperate late afternoon in mid-October at the College of the Desert (COD) Golf Center and, beneath the comforts of welcome cloud cover, Palm Desert High School junior Jiyoon Jang bangs balls before the watchful eye of swing coach Tony Manzoni.

Though Jang is clad in Aztecs' gear on this early autumn night, the 16-year-old won't be donning this uniform for long; in short time, Jang will be playing golf for one of a host of Division One programs currently courting her budding skills.

Over a scintillating summer, Jang's profile rose from desert standout to national name. In July, she advanced to the round of 32 in the match-play portion of the U.S. Girls' Junior Championship. Just two weeks later, Jang authored a 72-71 (tied for 15th) tally in the two-day stroke play of the U.S. Women's Amateur Championship at historic Nassau Country Club in Glen Cove, N.Y. In the first round of match-play at the Women's Am, Jang nearly caught the brass ring with an upset of defending champion Emma Talley before falling in 19 holes.

And all this from a young lady who began her golf pursuits in earnest just three years ago.

Now the 44th-ranked junior player in the country, according to Golfweek, Jang's rapid rise is a product of constant drive (which may be putting it mildly), coupled with a harmonic rapport with her storied coach.

Owner of 27 consecutive conference titles as men’s golf coach at COD, Manzoni sees in his star pupil the makings of future pro.

"She's the best I've ever taught at this age," says Manzoni, who has been in the golf instruction trade nearly five decades. "For playing golf for just three years, I've never seen anybody hit the ball like Jiyoon. I'll be surprised if she doesn't play on the LPGA Tour. She's got the tempo for it, the game for it and all the ingredients it takes." Jiyoon Jang has her sights set on qualifying for the  2015 U. S. Women's Open.

Such ingredients are mixed with a work ethic that finds Jang playing or practicing seven days a week.

"I don't like missing a day. It bothers me," says Jang with a maturity that belies her years. "I'm very critical of myself, so if I have a bad shot . . . I mean, I want to do really well, so every little thing kind of bothers me. There's always room for improvement in golf. It's a never-ending game. Even when you reach a goal or think you've got something – you don't. There's always more to reach."

Jang's aims in golf are focused, though the Rancho Mirage resident is akin to her coach in dreaming big.

"Right now, I just want to go to college, play college golf, and get an education," she says between balanced, rhythmic swing with her 6-iron. "But definitely, my ultimate dream is to be on Tour." Jiyoon Jang: "There's always room for improvement in golf. It's a never-ending game."

The kinship between Manzoni and Jang thrives on a shared purview of lofty expectations.

"We have a respect for each other – which is very important," Manzoni says. "And in all the lessons, we've had no real squabbles. There have been times – because she's intense and wants to play well – where we've bumped heads a little bit.  Because that's how we both are; but I think we each respect that we're that way. I don't like to be second place in anything and nor does she."

"We both have the same goals, and that's the main thing," adds Jang, who has her sights set on qualifying for the 2015 U.S. Women's Open in Lancaster, Pa. "I know where I want to be and Tony has certain expectations that I want to reach. And I also have super-high expectations for myself.

"And we're both really stubborn," the teen smiles through her soon-to-be-former braces. "So if something doesn't work out, we both want to fix it right then and there. We're both very passionate about the game."

Judd Spicer is a member of the Golf Writers Association of America. His golf column appears three times a month. Have a golf tip or golf story idea to share? E-mail Judd: thespicerboys@msn.com