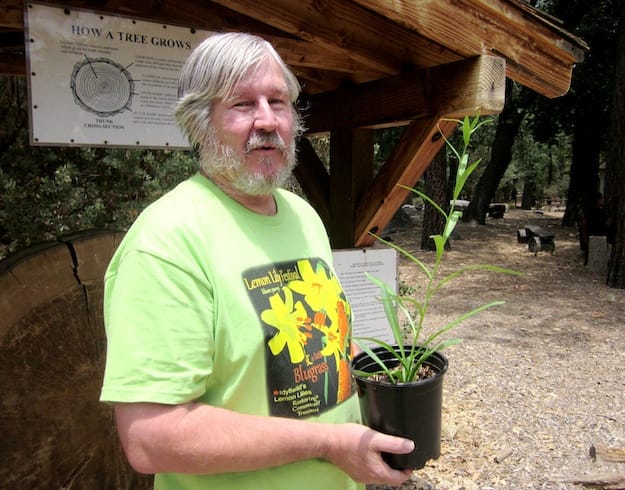 But then tourists brought them home and they perished. Although not endangered, the lemon lily is rebounding, thanks to the annual small town event.

Stith will be one of six speakers at the Fourth Annual Idyllwild Lemon Lily Festival, which runs July 13-14 primarily headquartered at the Idyllwild Nature Center, 25225 Highway 243.

The weekend will be full of speakers, hikes and children’s activities, there will be tours of private homes around Idyllwild and the downtown area near Jo’An’s Restaurant, 25070 Village Center Drive, will feature arts and crafts booths and bluegrass music provided by Bodie Mountain Express.

The speakers will discuss a variety of topics from lemon lilies and climate control to the endangered yellow spotted frog, and the Goldspotted oak borer.

“Lemon lilies need a special habitat to survive,” Stith explained. “They grow from bulbs in a moist mountain environment, generally along stream beds. When the bulb is dug up and replanted, it dries up and dies.”

As many as 5,000 lemon lilies were once taken from the San Jacinto Mountains, noted Harvey Monroe Hall, a botanist in 1902. Stith believes they planned on selling them.

During one three-month period, Stith and friend Tom Chester counted 2,662 lemon lilies in Willow and Tahquitz Creeks, from seedlings to healthy plants.

“We figured if these lemon lilies could survive in abundance without human intervention, then they could be transplanted along stream beds like they once did 100 years ago,” he said.

The Lemon Lily committee bought 101 seedlings in 2010, and planted 50 of them near the Nature Center. Some have bloomed and survived, but not all. Natural predators are gophers, insects and deer.

Yet, Stith has seen one as tall as he is.

“It’s the granddaddy of all lemon lilies,” he said, but was reluctant to tell where he found it because it might be taken as a “prize.”

This year’s festival hopes to educate visitors that lemon lilies can be admired, but they need to stay put. None will be sold at the event.