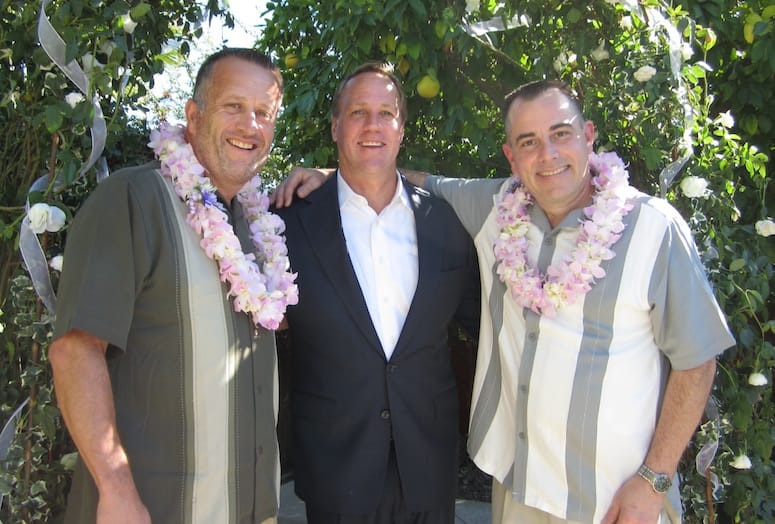 For Major League Baseball (MLB) umpire and part-time Palm Springs resident Dale Scott, the phrase, "You're Out," has taken on a new meaning in recent weeks.

In the October 2014 issue of Referee Magazine, a detailed profile on Scott's life subtly included a photograph of the umpire with "longtime companion" and now-husband, Michael Rausch.

At the outset of December, a follow-up piece on Outsports.com revealed to the world what Scott's friends, family, colleagues and employers had known for years. This is the photo of Dale Scott and Michael Rausch that appeared in Referee Magazine.

Soon to enter his 30th season umping professional baseball, Scott is less than 30 days into being a publicly gay man.

And for the first male official in any of the big four sports to come out, the reaction has been highly positive and supportive.

"It's been insane since the Outsports story came out," says Scott recently from a quiet corner of a Palm Springs' Starbucks.  "I was in Portland the day it came out; it was around 8:20 in the morning, and already my phone had blown-up. There were calls, texts, and e-mails. From that moment, basically for the next two days, it was insane."

The quietude of the (subscription-only) Referee article followed by the timing of the Outsports piece (after the MLB season) dually serve as evidence of the Scott's character.

"I certainly wasn't trying to wave a flag and say, 'This is me,'" he says.

Despite the understated announcement, the din of reaction was palpable. "You hear about the speed of social media, but until you're in the middle of it, I don't know if anybody can really recognize how quickly things spread," Scott says.  "That was a real eye-opener. I really wasn't sure what to expect. What has surprised me – which shouldn't – is the light-speed of the Internet and social media.

“Within an hour of this being posted on Outsports, it was on the ticker on ESPN, it was on CNN and ABC.  At one point, I Googled my name just to look at the stories, and it was in New Zealand and Australia; a friend that lives in Madrid, Spain, e-mailed me and said, 'You're an international superstar. There's a whole story about you.'"

Included in the Outsports' article was reference to Scott and Rausch holding part-time residency in the desert.

Detailing his Palm Springs' life between sips of coffee, Scott says that he's been traveling to the valley regularly since 1994, and that he and Rausch bought a home in 2007.

"I really fell in love with the area; such a nice alternative to wet, gray, but beautiful Portland in the off-season," Scott smiles. "There's something to be said for waking up every day and it's just gorgeous with the mountains and the blue sky; it gives a different frame-of-mind for sure." On the Saturday of Pride Weekend in November 2013, the celebrated desert backdrop served as canvass for Scott and Rausch's low-key wedding in their backyard, which was officiated by Palm Springs' mayor Steve Pougnet.

"We met the mayor a few years ago through a former neighbor," details Scott. "So when we decided to get married, I called Steve to see if he would be willing to officiate – he's a big baseball fan; a Tigers guy. He was happy to . . . he did a great job, and I'm very thankful to him for doing it. It worked out really, really well."

With Scott constantly on-the-move during the marathon MLB campaign, the couple — along with their black labs, Raleigh and Roman – spend the wealth of Scott's off-season in Palm Springs. Noting that they enjoy dining at TRIO and Spencer's, along with the new Tonga Hut in downtown ("Mike's into tiki, so that's kind of our new favorite place," Scott says) the two enjoy the months as a mellow desert respite. "When we get down here, we have a tendency to stick at home a lot," Scott says. "Mike's a great cook; he was in the restaurant business for years, so he's certainly better at cooking than I am. I'm not a golfer and people ask what I do, and it can be a lot of nothing. During the season, we're on the go constantly; we're at hotels and restaurants and flying two, three maybe four times a week."

An MLB crew chief for 12 years and a veteran of three World Series', Scott sees his life in baseball winding down in the next handful of years — which translates to a future involving less time behind the plate, and more time amid the San Jacinto Mountain surrounds.

"When I'm done (with baseball), it will be nice to get down here a littler earlier in the season, and have a chance to stay, pretty much full-time, into March and April," Scott says.

For now – aside from the couple's mini putt "grudge matches" at Boomers in Cathedral City – the Coachella Valley serves as an escape from the fevered competition of sport.

"The season is so intense that it's just a thrill for me to be able to sit back and have a nice, relaxed schedule here," Scott adds. "My head is spinning for seven months out of the year with all the travel, and it's nice and relaxed and quiet here, and I love that."