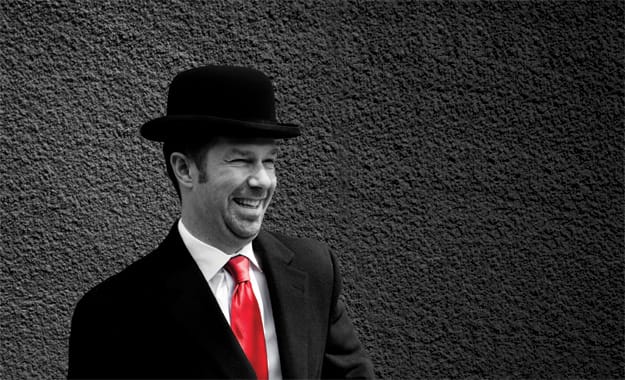 Jim Casey emerges from his swimming pool sporting a dark suit, white shirt, red tie, and bowler. Defying the typical image of a wealth manager, Casey wears his sense of humor as well as the Magritte style associated with the branding of his company, Integrated Wealth Management.

Although he has lived in Palm Springs only seven years, he has accumulated enough local clients that this year he remodeled a new office space in downtown Palm Springs and opened a second office in Palm Desert (he maintains his previous office and house in Marina del Rey).

Moreover, Casey has brought major funding to and raised the profiles of numerous nonprofits. In 2009, Integrated Wealth Management sponsored — to the tune of $150,000 — the Steve Chase Humanitarian Awards, Desert AIDS Project’s main fundraiser. He’s continuing his sponsorship for the 2010 gala in February.

“AIDS is a big one for us,” he says, “having dealt with a lot of friends who passed — who passed way too early.”

Unlike the Steve Chase program, which draws more than 1,300 supporters to Palm Springs Convention Center, and numerous ballroom-hosted galas, the intimate gallery fundraisers are part of Casey’s out-of-the-box thinking. He recites a line from a TV show in which one character asked another what event they were attending and the reply is, “It’s one of those events where no one knows what the charity is, but they know where the photographer is.”

“I didn’t want it to be that,” Casey says. “I have had the great fortune of sitting down with executive directors of numerous foundations who work more hours than they should. But their passion is their compensation. To hear those stories of why they got involved is what I wanted to be part of the pairings series.

“The large events are wonderful if they are carried off correctly,” he notes. “What I was so proud of after the Steve Chase were the comments that the message and passion of Desert AIDS Project were what they remembered most about the night.” This year’s co-hosts Linda Gray, Morgan Fairchild, and Donna Mills were so moved, he says, that they are returning for the 2010 gala as guests. Headline entertainer Diahann Carroll also is returning — to present the Arts and Activism Award to costume designer Bob Mackie.

In Carroll’s dressing room after the event, Casey’s partner, Jason Altieri, complimented her Mackie-designed gown. It occurred to them that Mackie would be a wonderful person to honor.

“Diahann Carroll said, ‘Let me know what I can do next year,’” Casey recalls. “She called Bob Mackie and said, ‘I know they will be calling you. It’s a wonderful event; you have to be there.’”

Casey dismisses an opportunity to take full credit for lining up celebrities.

“It’s easy having an organization like Desert AIDS Project, which is, in my opinion, one of the best-run organizations out there for nonprofits. I am happy to introduce who I know to them, and almost every time that’s all it takes. … Hollywood, unfortunately, gets a reputation for being very self-serving and egocentric. The people I have been exposed to give back.”

Casey himself began his philanthropic efforts as a child, participating in the March of Dimes walk and carrying a UNICEF bucket on Halloween. With his business, he first became involved with the Screen Actors Guild Foundation when it became a client. That relationship served as the impetus for his involvement with the Palm Springs International Film Festival.

“I thought there has to be some partnering I can bring to the table,” he says. “I offered our [$50,000] sponsorship of the film festival, and we also hosted a fundraiser for the SAG Foundation for three years. After that, word got out and we got approached by [other nonprofits], and we were happy to give back to the community that embraced us.”

Perhaps the question Casey always asked his mom hinted at his future profession: “How much money does Dad make?” Her reply: “Enough to put food on the table and a roof over your head. That’s all you need to know.” His father was a mailman, his mother was a homemaker, and there were five children. “We wanted for nothing, but life was pretty simple,” he says.

Casey graduated from State University of New York with a dual major in psychology and business and a minor in women’s studies.

“I was considering being an industrial psychiatrist,” he says. “My senior thesis was the different investment psychology among men and women. … But I loved the business side so much that I wanted to give it a crack, and psychiatry went by the wayside.”

Organizations and publications have put Casey on their lists of best financial advisers and America’s top wealth managers. He attributes his success to two things: the strong work ethic instilled in him by his parents and a passion for what he does.

“I love the relationship I have with our clients on a personal level. When we started taking on foundations [as clients], I loved what the money could do — not just the making of money, but the fact that it did things for the less fortunate. And it just snowballed into something bigger than I ever believed it was going to be. Maybe that was possible because I never had the goal of the accolades. It’s always nice and humbling when you get them, but it’s still about having client relationships for 20 years.”

Through the SAG Foundation, Casey met Jeffrey Lane, a Los Angeles press agent with a laundry list of celebrity clients. They hit it off, and Casey asked Lane to represent him. “I said to him in the beginning, ‘I never represented anybody like you before,’” Lane recalls. “Most of my clients were enter-tainment focused.” Now that Lane represents Casey, he gets e-mails time-stamped at 4 a.m.

“The thing I like about Jim is he’s very straightforward. You get an honest answer,” Lane says. “I think it’s wonderful in this day and age when it’s all me, me, me that he’s somebody who really does important things [for others].”

“I’m way too lucky; it’s that simple,” Casey says. He recalls showing a friend a video he and his siblings made for their mother’s 70th birthday. “She said, ‘Oh my God. You had an Ozzie and Harriett childhood.’ I looked back at how fortunate I was. I can work hard and do what I have done. I have accumulated a decent amount of money. I have the same relationship with my partner for 22 years. It just seems natural to give a little bit back.”

A mentor in the financial business told Jim Casey, “You really need to get a hobby, because you will burn out.”

“That was 25 years ago,” Casey says, adding that the closest he’s come is his recent involvement in making films. Moviegoers will find his name in the film credits of The Christmas Movie, being released Nov. 27.

Casey became executive producer of the film after a lunch with Gray and writer Dan Gordon. “Over lunch, [Gordon] told me the story,” Casey recalls. “In 45 minutes, I laughed out loud. I cried. I said, ‘I want to do this film.’

“I had in my early career been part of the team of a limited partnership that financed Dirty Dancing,” he adds. But his interest in acting reaches back even further.

“I was always involved in theater in school,” he says. He won the Oceanside High School senior class drama award and between high school and college starred in the “off, off, off-Broadway” show Has Anyone Seen Harry?, in which he played the title role.

“I realized I wasn’t good enough or attractive enough to get a job [acting],” Casey says. When comparing himself to others pursuing a life on the stage, he realized he lacked their passion for acting.

But at least now he’s living up to the quote in his high school yearbook: “I will always support the arts.”