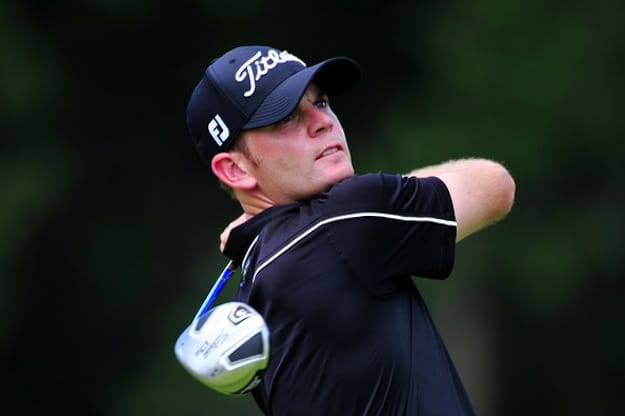 As a boy in course-less Idyllwild, Brendan Steele would familiarize himself with Coachella Valley golf at times when no one else would.

"There were a lot of summers that I teed it up at 11:30 a.m. at PGA West or La Quinta, and we would be out there with the worst tee times when nobody wanted to play in the middle of the summer," Steele recalled.

The former Bob Hope Classic was also a steady stop for the Steele family.

"I came down a few times," the 29-year-old Steele recalled. "My dad and I walked around with my brother, and I still have the programs with all the autographs on there

Steele’s positive vibe at the Classic was not misplaced. A meeting with one of his idols, pro Corey Pavin, would wind up coming full circle.

“I remember following him around at the Hope, and he was really nice to me,” Steele said. “I mentioned that when I won the Valero Texas Open two years ago, and later that night Corey heard that and he called me and he was like, 'I can't believe I was nice to you, you must have caught me on an off day!' It was pretty funny, but also pretty cool to have that come back around to me. So that was a good Hope connection there."

Steele was back at PGA West for the recent Humana Challenge (formerly the Bob Hope Classic), playing before a host of family and friends. He finished in a tie for 56th, an improvement over a tie for 66th place in 2012.

"My parents walked every hole and I had family friends from Idyllwild, friends from college, friends from high school and friends that used to be professional golfers and have now moved on,” he said. “So it was really, really cool. Once the tour gets off the west coast, it's rare that I have anybody in the gallery that I know, so it's nice to see people that are genuinely hoping that I play well.  And then when you do play well, like I did on Saturday, it's that much more special that they were there to see it”

After opening with a pedestrian 72 followed by a measured 70 on the second day, the University of California Riverside graduate surged up the event's weekend leader board.

"I started the week feeling great, like I was going to start out really hot and then the first couple of days didn’t go my way," Steele said.  "I got out on the course and couldn't really figure out what was going on with my swing, and I wasn't hitting any good shots."

To make the three-day cut and advance to final round of Sunday play, Steele crafted a superb Saturday card on the Nicklaus Private Course at PGA West.

"But it kind of clicked on Saturday and I figured I needed to shoot at least 8-under to make the cut," Steele continued of his 64 that tied for the third-best score of the day. "I was able to make 10 birdies and do a lot of things right. I was able to carry some momentum into Sunday and finish nicely with birdies on three of the last four holes to shoot a 67.”