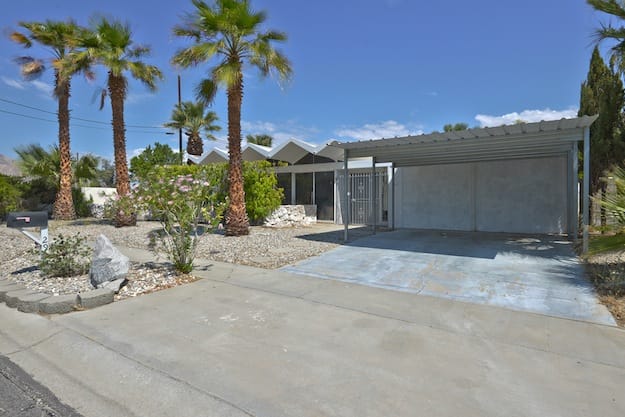 While famed Palm Springs architect Donald Wexler’s 1960s dream to share pre-fabricated homes as a means of addressing affordable housing may have fallen short of its premise, the appreciation for the all-steel modular homes remains intact even 50 years later.

The last of the seven prefab structures in the historic Racquet Club Estates of North Palm Springs has been recently purchased with the intent of restoring the home to its original condition, according to Paul Kaplan of The Paul Kaplan Group, which specializes in modern, architectural and mid-century properties.

“The buyers are collecting architectural significant homes,” Kaplan said, noting the house will be included in a vacation rental program of architecturally significant properties in the Palm Springs area.

Located at 290 E. Simms, Steel House No. 1 sold for $625,000, according to Kaplan. When Wexler created the homes, each sold for $14,000 and could be constructed on a site-poured concrete slab in about two days.

Wexler designed seven steel homes in the 1960s while working in conjunction with The Alexander Group out of what was originally slated to be a tract of 36 houses. However, the rising price of steel made the cost of continuing to build the houses cost prohibitive.

But the interest in modernism remained, catching fire in the 1990s after GQ creative director Jim Moore bought one of Wexler’s pre-fabs in 1993 and wrote about it, broadcasting Palm Springs’ wealth of the mid-century architecture, according to The American Institute of Architects website.

Now, all seven Steel homes are designated as Class 1 Historic Sites by the City of Palm Springs. House No. 2 is also listed in the National Register of Historic Places, the first Mid-century home in Palm Springs to gain such distinction.

The new owners of Steel House No. 1 inherit a two-bedroom, two-bath 1,532 square foot home featuring all the characteristics of Mid-century design: clean, simple lines, an open floor plan, and quiet interaction with the surrounding elements, according to Kaplan.

One of Wexler’s signature designs is the house’s folded steel plate roof, which shades the sun during the hot summer months while letting light in during the cooler winter months. Kaplan said the unique roof line creates an air baffle that acts as a heat sink to help draw heat away from the living areas as well as create shaded areas over the windows.

“What is remarkable about this and its six counterparts is the uniqueness of their construction: they were fabricated offsite and assembled onsite, and save for the foundation, plumbing, and electrical, were constructed almost entirely of steel,” Kaplan said. “Part of the reasoning behind the all-steel construction is its ability to withstand the heat and windy nature of the Palm Springs area, another was the cost effectiveness of steel materials.”