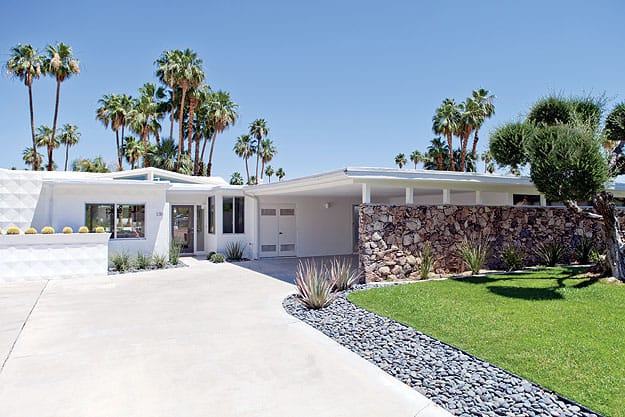 While this enthusiastically worded ad could have appeared in these pages today, it was actually printed in 1962. The community it described, Canyon View Estates, located in “Palm Springs’ fashionable south end,” was no ordinary condominium development.

“It was a new kind of architecture — in particular, the creative butterfly rooflines and triangular clerestory windows that have become defining features of midcentury design,” says Gary Johns, a real estate agent who lives in the community and serves as vice president of the Palm Springs Preservation Foundation. “They were putting windows where they hadn’t been before that allowed light in and made the most of the views, but also provided lots of privacy.”

Some of the villa-style condominium units were clad in native stone, and many had concrete screen blocks arrayed in a surprising variety of geometric patterns that played with light and cast artistic shadows on walls and walkways.

An advertisement in the November 1965 issue of Palm Springs Life introduced, “The Wonderful World of Canyon View Estates,” adding, “Prestige homes for people of prestige, who appreciate the very best. Spacious and fully carpeted, these homes are replete with custom cabinetry, all electric kitchens, private patios, individual carports and services areas — specifically developed by Roy Fey for those that enjoy carefree gracious living among gracious friends.”

But, Johns says, “Other than being new construction, they weren’t anything special at the time.” In fact, it was not in the least bit noteworthy that the architectural team of Dan Palmer and William Krisel had designed the community.

“This was an era when people in Palm Springs owned individual houses with swimming pools and private yards,” Krisel says. “But there was becoming a need for people who weren’t full-time residents to have a nice place to stay where they wouldn’t have to worry about gardening and maintenance.”

Krisel and Palmer initially planned for 225 houses, but they ultimately eliminated 45 of those in favor of more open green space.

“Roy Fey, who was my client and a builder, discovered he could get a piece of property near the Canyon Country Club [now Indian Canyons Golf Resort], and we could do a condominium there,” Krisel says. “He was, of course, thinking of a multistory apartment building, but I immediately said I didn’t think that was appropriate. I thought phasing from single-family homes to condos should be a gradual step where it really was a single-story building with your own individual front door and your own terrace and parking space, but there would be common recreational facilities such as swimming pools.”

When the homes first came on the market, a two-bedroom unit went for $22,500, and three bedrooms for $25,000. Fey built the community on Indian land over six phases, completing the last units in 1966.

Bob Fey, Roy’s son, says, “It was probably only the second or third residential lease that was done in Palm Springs.”

At the time, the law permitted only 25-year leases, but Roy Fey went to Sacramento and worked alongside tribal members to change the law. Canyon View Estates was given a 55-year lease that was later extended for additional 30 years. “That lease expires in 2046, and we’re currently working to finalize a new 65-year lease that I’m hopeful will be done this fall,” Fey says.

David and Arianne Keens purchased their Canyon View Estates home in 2010. They’re both teachers who live in Texas — Arianne works with gifted students at an elementary school, and David is an art professor at University of Texas at Arlington. But they spend their school vacations, and the entire summer, in Palm Springs.

“This was the first house we looked at, and we just fell in love instantly,” David says. “We really wanted a place by William Krisel, and we knew we could renovate it to be very clean and sleek, yet still be very much about the midcentury modern aesthetic.”

The Keens redid the floors and gutted the kitchen and bathrooms, as well as updated all of the electrical. “We’re huge fans of the midcentury style, so we wanted to do a sympathetic renovation and not be disrespectful,” David says. The couple furnished the home with period and vintage artwork and furnishings, including an Adrain Pearsall sofa.

Around the corner from the Keens’ home, Duff Kleiner undertook a similar renovation. “I’m an architect and interior designer, so we wanted a pure, modern kind of statement with iconic furnishings,” he says, noting that he also added some 21st-century green features, such as new windows, LED lighting, and bamboo cabinets and quartzite counters in the kitchen.

But the 1960s remains present throughout the home, including original Marimekko panels that were designed the same year the house was built. “When I began putting together the interiors, I thought it would be really wonderful to have something from that era in one of the rooms.”

While Kleiner and the Keens were conscientious about doing respectful renovations, Krisel has been less impressed with those done by some others.

“I’ve seen quite a few of the interiors,” he says, “and I have to say that I’m frankly very, very disappointed with the taste people have and what they do. And on a condominium, you cannot alter without the approval of the [homeowners association] board, so condos are only as good as the boards are strong on maintaining original design. I must say that some of the walls, and changes to the carports, and other things that have been added have not been to my liking. But that’s what the people on the board have approved and that’s the way it is.

“Yet, on this 75th anniversary of the city, I would like to say that Palm Springs should be very proud that it is known as the capital of the world for midcentury modern architecture, and it is the one city in America that really protects that design, advocates that design, and is proud of that design,” Krisel continues. “I think if it wasn’t maintained, restored, and appreciated the way it is here in Palm Springs, it would be a bygone event, and you wouldn’t see it anywhere in the world. So I give the city and the people who live here full credit for the fact that midcentury modern is still appreciated.”

That appreciation appears alive and well. The neighborhood’s architecture and landscape have become a magnet for fashion magazines and catalogs. Harper’s Bazaar used the neighborhood as the backdrop for its February 2012 cover and inside fashion feature, “Chic Easy Pieces,” by photographer Lachlan Bailey.

In November, a photo crew for the womenswear catalog Next Direct converged on the neighborhood with Brazilian supermodel Emanuela de Paula.

Driving through the “location,” the crews, like so many new residents in Canyon View Estates, could notice the stretch of homes located on Sierra Madre is on a bit of a knoll. Everything around it is very flat, except for this small ridge. The subtlety of design actually provides privacy — one of many details that Palmer and Krisel used to create a special little neighborhood that was nothing special at the time.

Canyon View Estates at a Glance

* Architect William Krisel designed the neighborhood for developer Roy Fey in 1962. Krisel (born 1924), who grew up in Los Angeles and earned his architecture degree at USC, was principal of Palmer & Krisel, and became a respected architect of midcentury modern houses in Southern California.

* Canyon View Estates was built in stages. As Alexander Construction Co. completed each group of homes, a new homeowners association was created. Today, six HOAs strive to preserve the architectural style and the neighborhood’s distinctive feel.

* Each group of homes clusters around a common pool, spa, and greenway. Some consistent elements of the design include carports, native stone on the front exterior, floor-to-ceiling windows, geometric rooflines, clerestory windows, and patterned white cinder block. Yet close examination reveals subtle differences that make each home one-of-a-kind.