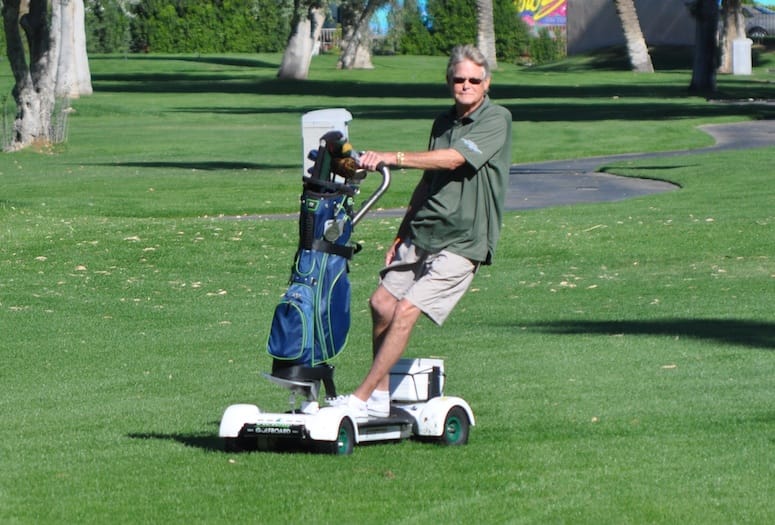 Perhaps you've caught sight of a rising tide around Palm Springs golf courses and around the Coachella Valley.

If you haven’t …  let me introduce you to the GolfBoard.

A hybrid of a surf- and skateboard, created to replace the traditional golf cart, the GolfBoard was named "Best New Product" at the 2014 PGA Merchandise Show. In addition to being promoted as kinder to the environment and better at maintaining the pace of play, the single-rider GolfBoard is just plain fun to ride.

Try it at  a couple of public golf courses, including the 36-hole facility at Tahquitz Creek in Palm Springs and the newish, 12-hole Hawk's Landing course in Yucca Valley. The JW Marriott Desert Springs Resort & Spa in Palm Desert is pondering their use as well.

GolfBoards are popping up all over the country, and the company is cultivating industry partners. Once the liability issues can be addressed, you might see them in abundance, and if the game sometimes isn’t fun, at least transportation might be.

With a guided-ride from Tim Venturi, GolfBoard sales representative for Riverside County and the Coachella Valley, take a look at the 'Boards specs, along with a test run traversing some local fairways.

Ride over to www.golfboard.com to learn more about where you can find the GolfBoard.

VIDEO: Tim Venturi talks about and demonstrates the Golfboards with Judd Spicer.