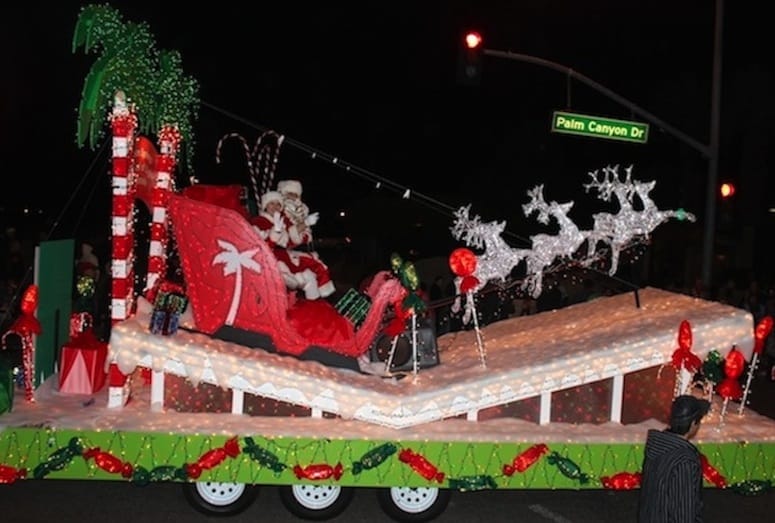 There’s a reason why Michael G. Allen remains the “official” Santa Claus for the Palm Springs Festival of Lights every year.

At 6 foot, 2 inches and weighing 300 pounds, you would swear that you were looking at the old gent himself. He’s got the twinkling blue eyes, a gentle voice and a real “bowl full of jelly” belly.

“I always invite the young ones who are skeptical to give it a good sock,” Allen says.

But when he dons the long, curly beard, wig and glasses, it’s not Allen who is transformed, but you. All at once, you’re 3 years old, with a racing heart because you’re seeing Santa for the first time.

Allen donned his traditional Santa outfit at the Palm Springs insurance company where he works. During this time of year, he’s got three sets of wigs at the hairdresser’s.

Allen was adamant about not being photographed before he was ready.

“I don’t want any children seeing me without my beard,” he says.

On Christmas Eve, Allen is committed to private gigs from 4 p.m. to midnight. Afterwards, he’s ready for a hot meal.

One time, Allen was sitting at Lyon’s English Grille on Christmas Eve in Palm Springs when he noticed a family at the next booth with a little girl among them.

Allen motioned to the parents to distract her, while he quickly put on his cap and beard.

As a grandpa to triplets, Sean, Alex and Matthew, Allen wants to keep them believing as long as possible.

“It’s getting harder, because they’re sharp as tacks,” Allen confesses. “Last year, Sean noticed that Santa and I had on the same shoes.”

This year, the grandkids aren’t coming to Palm Springs, so Allen hired a Santa in San Jose to drop in on them.

For his family, Allen is printing special holiday T-shirts with his likeness that states, “I believe.” During the Palm Springs Festival of Lights Parade, which commences Dec. 7 down Palm Canyon Drive, Allen’s sleigh is the pinnacle.

Those watching the parade don’t miss any details. For example, they noticed there was only six reindeer last year.

“It’s not in the budget, but we’re hoping to make it eight for next year,” Allen says.

Although the Festival of Lights Parade attracts nearly 100,000 people each year, Allen tries to make it personal. He shouts out “Merry Christmas” in Spanish, Mandarin (Chinese) and Tagalog (The Philippines).

“You can spot individual children in the crowd,” Allen says. “I look them right in the eye and they feel special.”

On his sleigh, Allen is equipped with a microphone and helpers, Cindy Bryant and Donna Knight. He stands up the entire time, saying, “Ho, ho, ho!” and “Merry Christmas!” to everyone.

The microphone is an improvement from years past when Allen nearly lost his voice calling out to the crowd.

“There’s a correct way to say, ‘Ho, ho, ho!’” explains Allen, who used to teach Santa workshops. “It has to come from deep inside your stomach.” Allen started out as a Mall Santa in 1967, logging long hours then he moved to private gigs on Christmas Eve. Over the years, he’s visited the homes of Palm Springs Mayor Sonny Bono, President Gerald Ford, comedian Red Skelton and friends of Frank Sinatra’s.

Each year, boys and girls ask for bicycles, teddy bears, dolls and GI Joes. But last year, one teenager asked for help.

“She didn’t want anything for herself, but wanted her friend’s family to have a Merry Christmas,” he says. “They didn’t have a father.”

So Allen bought toys and grocery certificates out of his own pocket.

VIDEO: A Holiday message from Santa