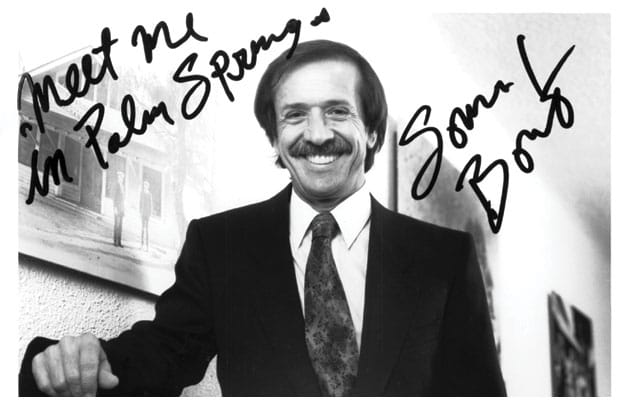 Sonny Bono, Palm Springs’ celebrity mayor, did more for the city than launch one of the world’s most prestigious film festivals. With a revivalist vision and an anti-bureaucratic cause, the star with a common touch embodies the city’s cultural and economic transition, neatly encompassing the 25 years between the city’s 50th and 75th anniversary celebrations.

Julie Baumer, the city’s former director of marketing and tourism, says Bono was determined to give Palm Springs “a new spin on old Hollywood,” reinvigorating that celluloid vibe of energy, sexiness, and excitement that first put Palm Springs on the map as Tinsel Town’s desert back lot and film industry playground.

“Sonny loved Palm Springs and wanted to make the city hip again,” says developer John Wessman, who was one of five people invited to the Bono home in 1988 to elicit a base of support for a film festival. “Of course, he was looking for money and knew how to play donors like a harp.”

“Sonny said he wanted to bring new life to downtown Palm Springs and attract more youthful visitors. It was more than the film festival. He talked about the big picture: free parking, outdoor dining, tables with colorful umbrellas. Like the film festival vibe, all of those things did eventually happen,” Wessman says. “Later, of course, the festival vision expanded, thanks to the support of Ric and Rozene Supple and later with the leadership of longtime Chairman Harold Matzner.”

“Sonny was the most amazing person I’ve ever met,” Baumer says. “Obstacles didn’t matter. He believed anything could be done with vision and determination, despite everyone’s doubts. … I remember going to conferences where people would reach out just to touch him as he walked through the aisles.”

Requests for autographed pictures of the new mayor came in from around the world at the rate of 100 a month. A Hollywood  publicity firm was hired for rounds of press conferences and interviews in major metropolitan areas.

“Sonny’s vision was unassailable,” says Hazen, who describes Bono as “the kind of guy who turned to those he knew and trusted” to achieve his goals. “His dream was laughed at, yet he had the authenticity and sincerity to go forward.”

Bono waged his mayoral campaign inspired by his battle with city hall over sign ordinances affecting the marketing of his new restaurant, Bono’s, located just north of the Riviera Hotel. The star of the ’70s Sonny and Cher Show and eventual U.S. Congressman approached his first political campaign with the same focus and strong will he displayed when he was still driving a delivery truck and was told he would never make it in the music business. According to John Stiles, a longtime local candidate supporter, Bono’s mayoral campaign set a new bar in campaign spending, exceeding $100,000 in a city where $15,000 to $30,000 had been the norm for council candidates.

Capitalizing on his name recognition with many of the new residents who didn’t relate to the old-guard establishment, Bono began rebranding the city the day he announced he was running for mayor, although it was a bigger commitment than he realized. He was shocked after winning to learn the term was for four years, not two, City Hall insiders recall.

Three years after his term as mayor (1988-1992), Bono became a U.S. Representative, serving until his death in 1998. Locally, his legacy continues each January with the Palm Springs International Film Festival.