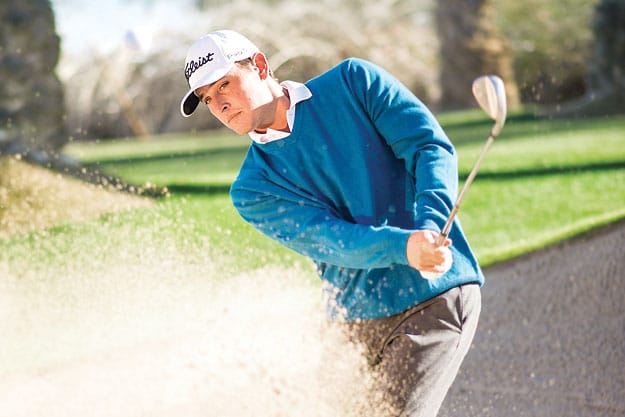 At the outset of 2013, the PGA Tour website’s profile page for Byron Smith showed a blank silhouette in the space deemed for a golfer’s standard-issue headshot.

Now in the 10th year of a decade-long pursuit to compete at the sport’s highest echelon, the roads of Smith’s journey have taken the 32-year-old Palm Springs native from the depths of his own resolve to golf courses around the world. A four-time winner on the Canadian Tour, Smith has qualified for 11 Web.com Tour (formerly Nationwide) tournaments in his career, but has never played in a PGA Tour event.

Yet the final leg toward golf’s promised land now stands in Smith’s 2013 purview.

The 1999 Cathedral City High graduate was raised on the fairways of O’Donnell Golf Club in Palm Springs and Mission Hills Country Club in Rancho Mirage. The story of his golf pilgrimage is a yarn spun with equal parts lament, vision, and hope.

“When I set out to do this, it was for one reason: to get on the PGA Tour and see how good I could get,” the handsome and amiable player says from the clubhouse of his home course at The Palms Golf Club in La Quinta. “Self-reliance is what appeals to me. And golf is a means to that. Whether it’s a big piece of property and a ranch with a bunch of animals, and surrounding myself with family and friends, that’s what I want. That’s my end goal. I know golf can provide that for me.”

Byron Smith has never loved golf in the romantic sense. Rather, a drive to reach the apex of his own potential, a road to a personal promised land, has defined his journey.

“From a young age, I saw myself as being in a tournament to win it,” Smith says. “I enjoy the competition aspect of it, and I enjoy the tournament-play aspect of it. I just can’t get as excited about playing golf until someone calls my name off the first tee box and this thing is official.”

Despite a measured prep career, Smith had shown enough talent (met with some likely persuasion from 11-time PGA winner and family friend John Cook) to gain an opportunity to play college golf at Pepperdine University in Malibu.

“It was kind of a rude awakening as far as, ‘I think golf might need to move up on my priority list,’” Smith rues of his abbreviated career at Pepperdine. “I showed up at college, and golf was almost like an extracurricular activity for me. Everyone else was there with golf first.”

He arrived for his sophomore season with a game polished from intense swing study at PGA West, but personality conflicts with the coach drove Smith to retire from the team and redirect his lyceum life toward a degree in philosophy. His studies hardly enhance his modern day métier, he laughs. “None of the guys I studied in college are going to help me now. They’re all existentialists. What’s Sartre going to do for me?”

But the time off the golf course instilled a reading regimen that has become an important part of Smith’s lifestyle. “The Beatniks — they help me,” he says. “The modern philosophers.”

Estimating that he played one round during his final two-plus years of college, the grooving of a golf shot swayed far from Smith’s mind. “Golf was long gone,” he says. “It was history. I’d moved on completely. I didn’t follow it, didn’t watch it, didn’t think about it.”

It wasn’t until a family trip to Panorama, British Columbia, that Smith rediscovered his skill at the game.

“We went out and played — I think it was Greywolf Golf Course — and I ended up shooting the course record from the back tees,” he recalls. “We were on number 17, it was getting dark, and the cart guys came out and said they were ready to close up shop. I asked what the course record was, and they said it was 6-under. And I said, ‘Well, I’m 6-under right now. Would you mind if I played the last hole?’ I birdied the 18th with the course guys watching. And for me, it just got the spark going.”

Smith eventually approached his father with his future plans. “I graduated and told my dad, ‘I’m gonna go pro,’” Smith says. “And he said, ‘Pro in what?’” In a game defined by bounces and breaks, Smith has yet to wholly envelop the roll that finds him competing among the world’s top players. Not that the separation is for any lack of will.

“It’s been a road, going uphill,” says Smith’s Los Angeles-based swing coach, Craig Chapman, a pro for three decades who has coached tour winners Kevin Na and Brandel Chamblee. In Smith, he sees the talent, the smarts, and the drive to play at the sport’s highest level.

“Byron’s very level-headed. He doesn’t get wrapped up in the hype of the game like a lot of people. He just wants to play. He keeps his emotions intact, which is hard to do in this game. To me, the difference between good and great is three words: “and then some.” You work hard, and then some. Byron is a sharp-cookie upstairs, and he’s always trying to pay the extra effort.”

After his 2004 debut on Southern California mini-tours, Smith segued to a lengthy, on-again-off-again run in Canada that revealed a measure of burgeoning promise and wheel spinning. Over the course of 10 years, Smith attempted to gain full-time status for the Web.com Tour and PGA Tour events via eight unsuccessful tries at Tour Q-School coupled with countless Monday qualifiers. By 2012, seeing his career stalled in Canada, Smith devoted his entire playing schedule to open-entry qualifying for events of greater gravity.

He estimates he went 0 for 15 in those tries. Of his 2012 sojourns, Smith says, “I was traveling, getting to a place on Saturday night, playing a practice round, playing a Monday qualifier, then getting on a plane on Tuesday and going home. All year.”

Smith concedes that giving up the game has oft-entered his mind. Though he’s engaged by the cultural flavor of his travels, he acknowledges that the road can also be a dusty, lonely place.

“The Monday qualifiers can be dark, little days,” Smith says. “You get to, say, hole 12 or 13, and you know that 6-under might get you in, and you’re at 1-under. So here I am in, say, Springfield, Missouri, and on hole 14 of some terrible golf course and I’m thinking, ‘What am I doing? I’m out here in Springfield. It’s 190 degrees. I couldn’t find a caddy, so I’m carrying my own bag. I’m completely, mathematically out — there’s no chance. What are you doing?’ There have been a lot of those.”

Yet the PGA Tour’s continued expansion toward a global enterprise offered Smith a final gasp of seasonal sanguinity. Enter the debut of PGA Tour Latinoamérica — a minor-league autumn and winter swing that salvaged Smith’s year, if not his career.

In August, Smith won the Latinoamérica’s Q-School in Miami to gain full status on the new tour, where he’d ultimately played five events across Mexico and South America and became its second-best American money earner during that time.

The success sent Smith back stateside to confront his snake-bitten run at the second stage of PGA Tour Q-School. Last November, Smith authored a cumulative 11-under tally across four days at the Plantation Preserve Golf Course & Club in Plantation, Fla., that earned him a tie for 13th and a ticket to the final stage of Q-School at PGA West two weeks later. And though Smith failed to achieve a top-25 finish that would earn him a PGA Tour card, a tie for 64th in his back yard gave him promise.

For the first time in his career, Smith has full-time domestic status. Guaranteed eight starts on the Web.com Tour, Smith could earn PGA Tour status with a finish in the top 25 of this season’s money race.

“It’s just huge for me to finally have the security of eight events,” Smith beams. “It doesn’t seem like a lot, but I don’t have to necessarily win in those first eight to make the reshuffle. I just have to make a few cuts, which isn’t asking a lot. It’s nice to finally be in a situation where, if I play well, things will take care of themselves. It’s like I finally have the opportunity. And it’s taken me a while to get here.”

Club in hand, Smith plays on, seeking to fill the road, and an empty silhouette, with the stroke of personal fulfillment and the face of success.