Propelled by his family’s name, Dave Stockton finds his groove in teaching at Stone Eagle Golf Club in Palm Desert 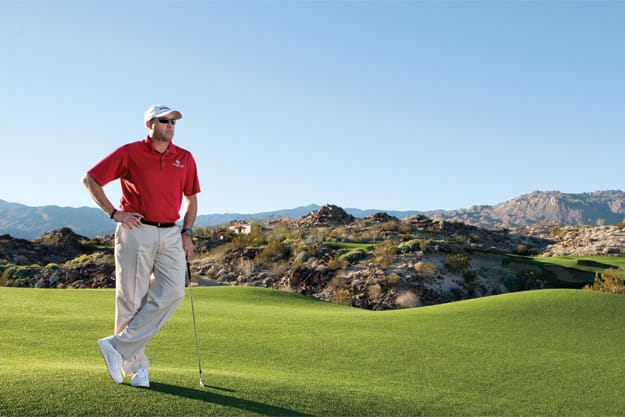 Nothing is more harmonic than a man totally at ease in his natural element. To ascend the steep and spare beauty toward the apex of Stone Eagle Golf Club in Palm Desert is to observe such a portrait painted in full. There, amid the practice green’s bosom, works Dave Stockton.

The coffee hue of his desert skin at one with the rocks, the whites of an ever-present grin offsetting the earth tones, this is a teacher at home, the undulating putting surface and staggered row of 4.25-inch cups his classroom.

Convivial in character and vigorous in life, the 44-year-old Stockton, a Rancho Mirage resident, may well be the jester in the court of Southern California golf royalty — and he has reason to smile. His cognomen rooted deeply across the region’s fairways, Stockton’s branch — twisted as it may be — represents a life that is all his own.

On this desert winter morning, the short-game guru works with one pupil in a robust stable of Stockton clients that range from 20-handicappers to some of the best players in the world.

Stockton backs the distressed young man off the ball.

“My dad used to tell me that there are a billion people in China who could care less if you make that putt,” the teacher eases.

The lesson proceeds, and the instructor observes. The club in his hand seems like a natural extension of his limbs, an active symbol of the surname Stockton.

Together with his younger brother Ronnie (an LPGA specialist) and father Dave Stockton, “Junior” (his longtime nickname, although the suffix isn’t his legal designation) formed “Stockton Golf — A Signature Approach.”

Buoyed by the elder Stockton’s legendary status as a five-time major winner (two PGA Championships and three major titles on the Champions Tour) and winning captain of the 1991 Ryder Cup team (with his boys as assistants), the family business teams to bestow the most sought-after short-game instruction.

Though their work with Phil Mickelson prior to his 2009 Tour Championship victory catapulted the family enterprise to global prominence, the Stockton golf bloodlines roll back to Junior’s grandfather, Gail Stockton, proprietor of Stockton’s Sporting Goods in San Bernardino and head pro at nearby Arrowhead Country Club.

Born in Redlands, where his parents and sibling still reside, Junior was caddying for his father on the PGA Tour by the time he was 12 years old.

“Watching my dad work around a golf course was great for me to learn how to score,” he says of the seven summers spent on his father’s bag. “You go out on the range, you can watch guys hit it great. But do they know how to get the ball in the hole? I learned that vicariously from watching my dad and the other pros. I was a sponge.”

The father took note of the son’s aptitude.

“We were playing in Milwaukee one year and he was 13,” the senior Stockton recalls. “I’d made a 2 on this par-3 and after the round he said, ‘I want to ask you about your tee shot on No. 5. I don’t think you hit the right shot.’ And I made a 2 on it. He said, ‘When they put the pin toward the back of the green, you’re going to want to hit a lot lower shot than what you hit. But it was fine today.’ And I was thinking, ‘That’s pretty darn sharp.’”

That detail would take Junior to the University of Southern California, where he’d join his grandfather and father as Trojan golf All-Americans, becoming the first family to accomplish the three-generational, single-sport feat.

On weekends, Junior would take his USC teammates out to his folks’ retreat home on the third hole of the Dunes Course at La Quinta Resort & Club. After college, the residence would become a bachelor base for a touring lifestyle.

“There’s no better place in the world than right here to get your game ready and prepare,” says Junior, now a married father of two.

After capturing two wins on the Nike Tour (now the Web.com Tour) in his 1993 rookie summer, Junior earned a three-way tie for first of that season’s PGA Tour Q-School final played in his back yard. Moving his desert base to a nearby tennis villa, a five-year run of tour prosperity ensued. From 1994 to ’98, Junior played in 151 tour events, recording 16 top-10 finishes and five top-threes.

Yet his burgeoning success came to a sobering halt.

“If you look at my playing career, after we had our first child, Serena, in 1998, after a lot of issues with that pregnancy — that was when I lost my edge,” Junior says, his ubiquitous grin finding a rare fade. “Golf didn’t seem important to me anymore. I didn’t want to be away. She was born three months premature, and we lost her identical twin.”

The tenet of feel and grounding of family that has forever defined the Stocktons extends far beyond the golf course.

“The situation with Serena basically knocked out whatever chance he had on tour,” his father concedes.

While Junior would go on to record five more top-25s over the next two seasons, the emotional toll would forever alter his playing purview.

“It’s not natural spending 10 hours with your kid, and then you’ve got to leave them and hope they survive,” he says. “Every night, we’d call the hospital. ‘How’s Serena?’ It changed me. Big time.”

The events of the 2000s found Stockton on the Stone Eagle practice green searching for his eventual place in the world.

As his playing career wound down, and after his son Jake was born, the family moved to a more spacious house at Rancho La Quinta. A two-year stint of golf commentating for USA Network followed, as did a stretch of real estate work that included a run with The Madison Club in La Quinta.

“I look at the prior things that I did as a rehearsal for what I do now,” he says.

Not until Junior approached 40 did he wholly recognize his talents and appreciation for instruction.

“The teaching seed was planted in about 2008,” Junior says. “I’d always helped people, but I never thought of it as a career choice. But I realized that I got more enjoyment out of that than anything I did in my own playing. There’s no question I’m a better teacher than a player.”

The elder Stockton recognizes his son’s progression: “I’ve been amazed at how fast he’s picked it up,” Stockton says. “The thing that benefits David is that he’s got extremely good people skills. In Stockton Golf, we don’t teach a method. Our job is to look at a person and make him or her feel comfortable. Junior has that knack.”

That extends to Junior’s vigor for an active lifestyle that shifts from high-speed buddy ventures at Chuckwalla Valley Raceway in Desert Center to climbing the Bump and Grind in Palm Desert to the quietude of the avid outdoorsman’s family hunting trips at the Niland Land Company near the Salton Sea. A devotee of desert dining (he counts Wally’s Desert Turtle and Fleming’s among his family favorites), Junior often parlays the bounty from his hunting excursions into duck tacos for his friends at Fresh Agave in Palm Desert.

“David is going to be a part of the community — he’s just that kind of person, always out and about,” the elder Stockton says. “We’d love to have him live up here in Redlands, but he might consider this the ‘sticks.’ It’s not the high life that he has in the desert.”

Meanwhile, Junior is as much a part of a family business, and bloodline, as he is his own desert man.

“Nine months out of the year, it’s hard to find a better place than the desert,” Junior says. “It’s easy to get anywhere I need to go, and the people are so nice. I’m not much of a big-city guy, so I feel relaxed here, and I’ve lived here longer than I’ve lived anywhere else. It’s an amazing spot.”

“I bring people up here to Stone Eagle, and their jaws drop,” Dave Stockton says as we arrive at the green of the course’s bet-setting 19th hole for a one-hour putting lesson.

And he’s right, of course. Below, the Tom Doak-drawn grounds are a portrait of early-morning quietude and inspired routing achievement. With nary a distraction, this is a school of serenity, and focus should come with ease.

But focus is also hard. There may be no more formidable enemy in golf than oneself, or, more specifically, one’s inner monologue.

I met Stockton in the summer of 2012 at Stockton Golf’s teaching locale at The Grand Del Mar in San Diego, and have since been considering this experience. A desert resident for more than two years, I’ve taken my game from a bulky 20 down to a respectable 12-handicap. Still measured off the tee and inconsistent (though improving) with my mid-game, the skills of chipping and putting have always been my scoring savior.

But this situation is intimidating. It shouldn’t be, but it is.

Stockton continues with gregarious ease, and although I’m trying really hard to focus, my brain says: “You’re taking a lesson from one of the world’s most sought-after instructors. Wow! This is the same voice that Phil Mickelson hears. Crazy! This is like cooking with Jimmy Schmidt or sketching with John Lautner. Amazing! All right, now shut up, listen, and do whatever he tells you.”

Listening is 90 percent of the lesson. We roll maybe 25 balls the entire time. Mental preparation largely usurps mechanics with the Stocktons, and little by little, I’m able to tune out the internal din and absorb what Junior is saying.

“Use your imagination, visualize,” he says. “That gives you your feel. We get our feel from what we visualize.”

Though he takes issue with the openness of my lead foot and the brevity of my putter head’s takeaway, he likes my forward hand press (a Stockton staple) and employs the breadth of our lesson to get me to spend far less time standing over the ball. Studying the line from the low side, gauging speed and ever eying the hole before looming over the ball is what I need to change.

Two days and one personal practice session later, I played a round with my pop at Indian Springs in Indio, employing the new knowledge.

Change is hard. Listening is easy.