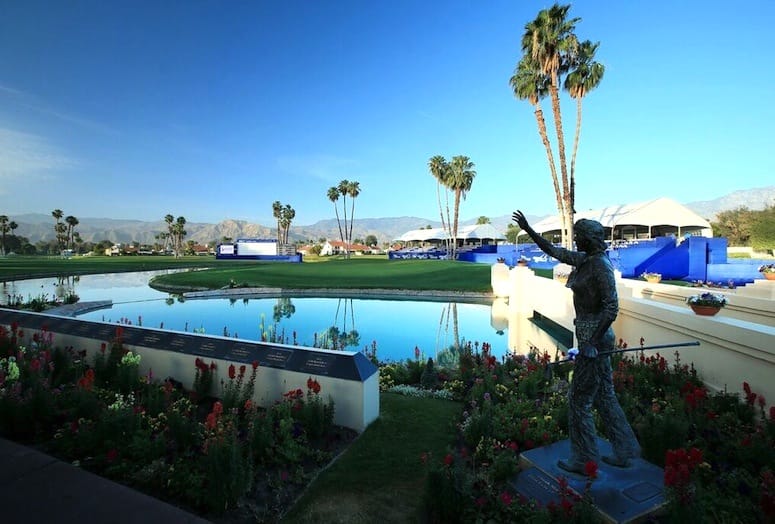 Golf's first major championship of the season returns to the Dinah Shore Tournament Course at Mission Hills Country Club starting March 31 for the 45th annual playing of the ANA Inspiration.

Aside from the Masters, the ANA is the pro game's longest running tournament continuously held at the same locale. And, yeah, there are those out here who still refer to the tournament as the "Dinah" or the "Kraft," but ANA – Japan's largest airline – is flying in to Rancho Mirage with some serious swagger for year No. 2.

Here are a few vitals to get your event week underway. Publisher Arianna Huffington (left) and Olympic swimmer Missy Franklin will appear at the “Inspiring Women in Sports Conference” on March 29 .

Last year, ANA really didn’t have much lead time to make a pre-event imprint in the desert sands.

Along with bringing some new tabling and localized food trucks on-site to enhance the vibe, the tourney is accompanied by some unique new events this year.
On March 29, ANA presents its star-studded “Inspiring Women in Sports Conference,” featuring speakers Arianna Huffington, Annika Sorenstam, Abby Wambach, Lindsey Vonn and Kristi Yamaguchi. The event is from 1-4 p.m. at Mission Hills, and open to the public (though tickets are limited).

Later that same day, the ANA will partner with the Palm Springs-based American FootGolf League to hold a “rematch” of the USA vs. Japan finals from the 2015 World Cup. Hosted at the Mission's Arnold Palmer Tournament Course, the six-hole exhibition match takes place from 5:45 – 7 p.m. and is free to the public. For those unfamiliar with the Desmond Muirhead-designed Dinah Course, a good introduction will be found in our "Key Holes" video, filmed with Gabe Codding, longtime tournament director for the ANA Inspiration, set to post March 26. Detailing holes 6, 8 and 18, we think this course preview will provide a fun and full flavor of what's soon to test the best women golfers in the world. Every champion takes a leap into Poppie's Pond.

As for that famed 18th hole, the water-guarded par-5 finisher is now known as much for its canvass of Sunday drama as it is for the eventual victor's leap into Poppie's Pond adjacent to the green. Begun as a spontaneous celebration by winner Amy Alcott in 1988, the annual dive and ensuing robe presentation now charts among the most anticipated (and photographed) acts in all of sports. Brittany Lincicome set the stage for an inspired major championship season in 2015 with an eagle finish to force a playoff with Stacy Lewis, who she overcame over the  final three holes to claim her second ANA title. Though no woman has repeated in Rancho Mirage since Hall of Famer Annika Sorenstam in 2001-02, a back-to-back title claim by Lincicome would place her in special company, as just the fourth three-time winner in ANA history. Stacy Lewis will want to erase losing the lead in the final three holes last year.

Look for an especially intense campaign this year, as the added luster of golf's return to the Olympics this summer in Rio de Janiero will no doubt find the international field vying to make a stated, spring presentation on the Games' point chase in an effort to represent their respective countries.

While the ladies' game is deeper than ever, you can't look past the chances of 2011 ANA champ, Stacy Lewis. Among the most competitive and plucky players in either the men's or women's game, Lewis will surely have added fuel to erase the memory of her late-game putting woes from last year's runner-up finish.