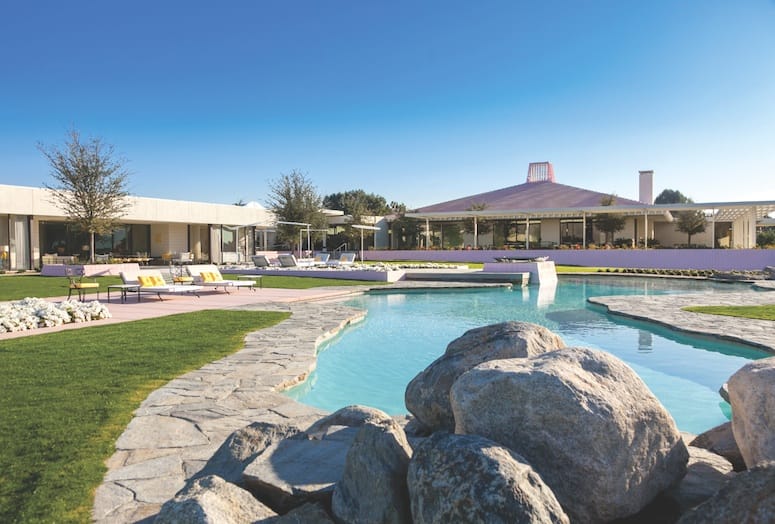 A. Quincy Jones and partner Frederick E. Emmons’ largest commission spanned 1963–66 with Sunnylands, the winter home of Walter and Leonore Annenberg in Rancho Mirage. The 25,000-square-foot home, situated on 200 acres, proved challenging for Jones when Mrs. Annenberg asked him to incorporate Mayan influences into the design.
PHOTOGRAPH BY MARK DAVIDSON

Two projects, the Palm Springs Tennis Club (1947) and the Town & Country Center (1948) — designed in conjunction with Paul R. Williams — introduced Archibald Quincy Jones to the potential challenges of desert architecture. Dramatic broad overhangs protect the floor-to-ceiling glass at the Palm Springs Tennis Club and provide a geometric contrast to the large boulders surrounding the structure at the base of Mount San Jacinto. The courtyard designed by Jones and Williams for the Town & Country project so successfully drew in customers that the owner pushed the architects to remodel the entire block.

So, fairly quickly, Jones became an expert at designing for the harsh desert climate. His approach included the use of generous, wide overhangs that provide deep pockets of shade, interior courtyards to create cooling open-air spaces, and building materials that generate thermal mass. A. Quincy Jones became an expert at designing for the harsh desert climate.

By today’s standards, Jones and his partner, Frederick E. Emmons, would be considered “green.” By orienting structures with generous glass on the southerly exposure and adding sufficiently wide overhangs, the architects assured protection against direct sun exposure during the summer. In the winter, when the sun was lower in the sky, the sun would heat the structures through solar gain. The use of turned-down eaves and vertical louvers on the west façades protected structures from heat gain in the late afternoon when the sun was lowest in the sky. These were features far ahead of their time.

Jones’ exploration of new building materials and construction techniques resulted in innovative approaches to traditional building types, such as the “sun flap” that he used for western exposures on many projects, particularly those in Palm Springs. The flap was a vertical extension of the roof turned down like the brim of a hat, reducing heat gain from the late-afternoon sun. This touch is quite evident in the beautifully restored Jerome J. Robinson House (1956–57) in Palm Springs. Very wide overhangs protect the southern façade of the Robinson House, and Jones’ signature wide canopy leads to the entrance positioned deep in the house. The canopy also serves as a sheltering porte-cochère, where Jones created a miniature oasis with a small, refreshing interior garden that separates the lounge from the dining room.

In 1963, Walter and Leonore Annenberg commissioned the firm of Jones and Emmons to plan what would become the largest house the team would design, Sunnylands (25,000 square feet). Despite the extravagant size, Jones maintained his practice of sheltering a building with a dynamic roof. Sunnylands’ enormous pyramidal roof culminates in a central skylight that brings alive the living space below. Jones specified his concrete waffle-design roof for the flat sections of the project, which gave an additional layer of insulation from the desert heat. The skylight over Sunnylands’ atrium was modeled after Mayan pyramids, and casts light onto an indoor sculpture garden and fountain. William Haines and Ted Graber designed the interiors.

The project, completed in 1966, was unusual in many ways, but two specific requests from Mrs. Annenberg were that the building should display a Mayan theme and that it manifest a pink color scheme to match the color of the setting sun on the surrounding mountains.

Jones and Emmons didn’t do “themes” or “pink buildings,” but they translated Mrs. Annenberg’s wishes into a dignified structure that echoes Mayan characteristics and blends into the landscape as the sun sets on the mountains. (The outside areas and pool mostly face Mount San Jacinto, while the actual front door faces northeast toward the Chocolate Mountains.) The house is now open to the public with a visitors center by Frederick Fisher and Partners. A. Quincy Jones designed this home (1956–57) in Palm Springs for the late Jerome J. Robinson, who was from Chicago. Jones used strong verticals; all elements lead the eye to the outdoors, taking advantage of Palm Springs’ 350 days of sunshine a year. The home was used in the remake of the film Ocean’s 11.

Jones had a formative effect on Southern California architecture in the postwar era. He set the standard for livable architecture with inventive and appropriate designs. The sensitive siting, flexible floor plans, and thoughtful detailing resulted in unique, timeless designs. His projects slip inconspicuously into nature; house and garden intertwine, and a well-thought-out space becomes a joy to inhabit. This is the sixth of a nine-part series adapted from The Desert Modernists: The Architects Who Envisioned Midcentury Modern Palm Springs. The book, published by Modernism Week in partnership with Palm Springs Life, was released in February 2015 to correspond with the 10th anniversary of Modernism Week. This chapter’s writer, Cory Buckner, is a practicing architect in the Los Angeles area. Her firm specializes in contemporary residential design and midcentury remodel and restoration projects. Buckner is the author of A. Quincy Jones, published by Phaidon Press.