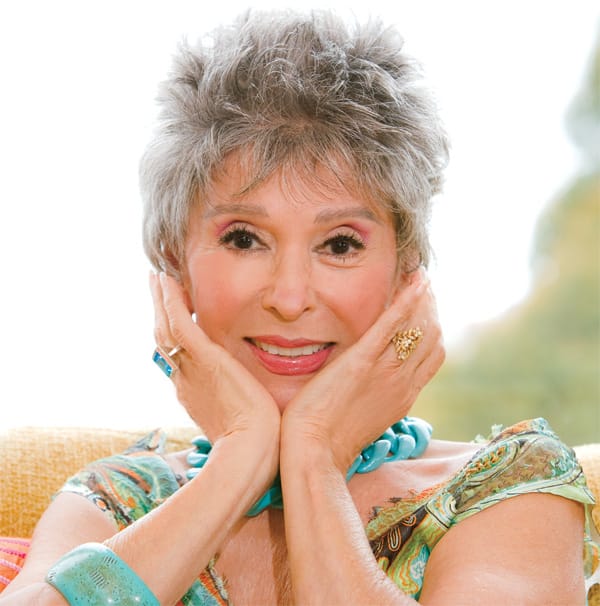 THE STACCATO TAP-TAP-TAP of the hi-hat punctuates the air as the lights slowly illuminate Rita Moreno in a red gown. She snaps her fingers to the familiar opening chords of “Fever,” a vision of loveliness in stark contrast to the scruffy, longhaired drummer striking the cymbals behind her.

A few moments in, the drummer goes off script and begins pounding the drums loudly, startling Moreno. A consummate pro, she continues singing, but then hits the breaking point. She strolls over to the drummer and gives him what-for in Spanish. This is her performance, after all. As she returns to center stage, the drummer grumbles and plays even louder. Struggling to be heard, Moreno has had it by the end of the number. She picks up a pair of cymbals and claps them around the musician’s head.

It sounds like utter disaster, but it’s all in good fun and Moreno is in on the joke. Her rebellious co-star is Animal of The Muppet Show fame; this 1977 cabaret spoof, aired during the show’s fifth episode, earned her the first of her two Emmys.

That award completed a rare show business grand slam. Moreno had already earned an Oscar for her charismatic turn as Anita in West Side Story, followed by a Grammy and a Tony, making her one of just a handful of performers to have won all four major honors.

After six celebrated decades in the industry, Moreno has plenty of tales to share — which is exactly what she’ll do during An Evening With Rita Moreno, opening the Annenberg Theater’s season on Nov. 7. The cabaret show will feature her singing and acting skills, of course, but she aims to give audiences a broader connection to the songs.

“I do a lot of Broadway and standards and Spanish songs,” she says. “And there are lots of wonderful anecdotes — some about myself, with respect to my career in show business, and some about how I came to this country. Every anecdote or every story that’s told absolutely segues into an appropriate song. I think it’s one of the best shows I’ve ever done.”

Moreno will perform a piece from Sunset Boulevard that was a hit with audiences last April when she participated in One Night Only at McCallum Theatre. “It involves not just singing,” she explains, “but it involves acting; and that’s my kind of thing, my métier. So I’m really, essentially, an actress who sings.

“I’m very, very fortunate to be doing what I love most in life,” she continues, “but my favorite is live performance. And I love doing my cabaret act almost more than anything else, because I get to interact with the audience. And even though it’s the same selection of songs, every show is different, because it changes with how the audience reacts. It’s called synergy.”

Although she’s comfortable in live settings, Moreno, 77, confesses to still experiencing stage fright. “I get it all the time,” she says, “and I get it when I’m doing something new. And I really, really get nervous. My hands get icy cold and sweaty, and my knees literally knock! Isn’t that hilarious? After all these years …

“And it’s always at times like that when I sit in the dressing room and say to myself, ‘Why are you doing this? You’re too old to be feeling like this, to subject yourself to feeling like this! Stop this!’ Then I go out on stage; and after it’s over, I’m happy and elated and wired. Once I finish the first or the second number, I’m happy. But before I go on? Oh, I could just die!”

Moreno debuted onstage when she was 13, landing a role in Skydrift on Broadway with Eli Wallach, only eight years after she and her mother left Humacao, Puerto Rico, for New York. Hollywood soon came calling, with film roles in Singin’ in the Rain and The King and I putting Moreno on the radar. But the actress bolstered her legacy with West Side Story in 1961, kicking her way through cultural and gender barriers to become the first Latina to win an Oscar. (She also collected a Golden Globe.)

“West Side Story, with respect to the role I played — Anita — well, my goodness. I understood her immediately,” she says. “Anita was me.”

Moreno has appeared in countless roles on film, stage, and television. After daughter Fernanda Luisa was born in 1967, she turned to family fare in the 1970s, collecting young fans as Millie the Helper on television’s The Electric Company, for which she won a Grammy. (That’s Moreno yelling the familiar “Hey, you guys!” at the show’s opening.) Later, a new generation got hooked watching her portray psychiatrist Sister Peter Marie in HBO’s gritty prison drama Oz.

“I loved doing Oz, because the writing was brilliant and because the actors in it were breathtakingly brilliant,” she says. “It was an absolute privilege to be working with these fabulously talented people.”

Her “great access to emotions” helped her master the large range of roles, she explains. “There’s the stuff with the Muppets, then there’s Oz, and then there’s West Side Story. It just goes on,” she says. “There’s a movie I did with Jack Nicholson called Carnal Knowledge. It’s just these huge, big ol’ leaps. But that’s what being an actor means. And that to me is the fun. I love playing people that are very, very different from me.”

Moreno now lives in Berkeley with her husband of 44 years, Dr. Leonard Gordon. Her daughter, who designs the custom jewelry line Nandiz, lives nearby with her family, which allows Moreno to spend plenty of time with her two grandsons. Living there also feeds her craving to perform live.

“When I moved up here from Los Angeles, I became involved in the Berkeley Repertory Theatre,” she says. “It gives me a theater fix, and I get to do parts that I couldn’t play anywhere else. I played Maria Callas in a play called Master Class, and I also played a crazy, crazy Southern mother, Amanda Wingfield, in The Glass Menagerie.

“I love to do live performance,” she adds, “but I don’t like at this age anymore to do eight shows a week. So when I do the Berkeley Repertory Theatre, I do six a week. Then it’s heaven for me.”

She also participates in numerous charitable causes and has lectured on race, the arts, and other topics over the years, garnering even more honors. President George Bush recognized her achievements in 2004, awarding her the Presidential Medal of Freedom (the highest civilian honor in the country) and citing “memorable performances by a lady of incredible talent and style, energy, and beauty.”

It’s precisely this depth of experience Moreno will call on during her cabaret show, choosing pieces that encourage the audience to engage and become part of the journey, too. “I love songs that say something,” she says. “Where I can really sink my teeth into something is what I truly love best, and I think the audience does, too.”

Moreno has spent a lifetime collecting anecdotes, forming opinions, and blazing trails. And she isn’t afraid to share her thoughts. “Listen, I’m 77,” she says. “I don’t really want to spend the rest of what’s left of my life waffling. It’s a little late for that.”