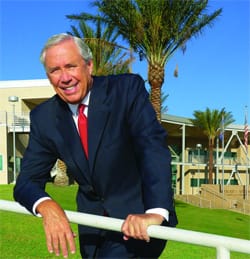 Richard “Dick” Heckmann grinds his teeth over the Phoenix Suns’ last-minute loss in an early playoff game against the Lakers. “In professional sports, you can’t ‘manage.’ You just get rid of ’em,” says the team’s part owner, barely suppressing a nervous facial tic. His manner brings to mind a man accustomed to having things go his way.
|
At the same time, he defies the image of a man with his immense corporate success. Dressed in jeans and denim shirt, his wavy gray hair in need of a trim, he rambles around his huge Rancho Mirage house.

“I love basketball games,” he says, then adds, “I love being on my boat. I have a bunch of people waiting on me, and I can go anywhere I want.”

He’s well known for chaperoning his kids and their friends on a spring break cruise to Mexico aboard the Orion, his 125-foot Feadship. He calls the yacht his “floating beach house, which I can put off any beach in the world.”
“I love being on the water. It’s always tranquil,” he says, the edge gone from his voice. “I care less about what’s going on in the news, and I have time to think.”

Today, Heckmann seems to be navigating his own personal sea change — downshifting from driving corporate executive to mentor the next generation of businessmen and -women through the International Heckmann Center
for Entrepreneurial Management at the Palm Desert campus of University of California, Riverside. His $6 million contribution to the school put his name over the door and an MBA program in place.

You’d think the man who virtually created the domestic water business by turning a sleepy $17 million water company into the behemoth USFilter would project an ego to match. But Heckmann disarms with self-deprecation. He’s aware that the seminal event in his successful business life — selling USFilter to the French conglomerate Vivendi for a cool $8 billion — was due in no small part to timing. “I couldn’t build USFilter today because the circumstances aren’t right,” he says. “The situation makes the entrepreneur, not the other way around.”

Of the halcyon days of corporate consolidation, then President and Chief Operating Officer Andy Seidel — who attended meetings in France between Heckmann and Vivendi CEO Jean-Marie Messier — says, “Dick was genetically engineered for the ’90s. He likes a big platform. [He and Messier] are both incredibly charismatic, they both love the big vision, and they talk a good story. It was a hand-in-glove fit. I knew there’d be a deal there.”

He acknowledges that it’s more, but won’t say how much.

Messier has no regrets about falling victim to the Heckmann charm offensive. “Would I work with him again? Yes! Tomorrow morning!” says the Frenchman. “He is a real entrepreneur, very internationally minded. He understood before anyone else the importance of water and water technology.”

Heckmann is building another empire with K2, the publicly listed, Carlsbad-based sporting goods conglomerate he has headed for five years, so far spending half a billion dollars on 26 acquisitions. In this corporate reincarnation, Heckmann’s biggest customer is Wal-Mart, China his biggest manufacturing base, and the investment reporting Web site The Motley Fool his biggest detractor.

“Richard Heckmann’s base salary increased more than 25 percent in 2005,” reads an April 2006 story on K2 that also notes the company’s stock dropped 40 percent the same year.

“I don’t read the negative articles,” Heckmann says. And though he calls his own leadership style “collegial and fun,” he doesn’t suffer fools gladly. People who work for him “don’t get daily doses of management,” he says, “You get ‘Here’s the job, go do it, and if you screw up, …’”

Intelligent and well-spoken, Heckmann hardly comes off as “an intellectual.” He went to the University of Hawaii to escape his native Iowa and its bad weather. He reads nonfiction books like Testosterone, Inc.: Tales of CEOs Gone Wild. The last fiction he read was The Da Vinci Code and “something by Tom Clancy.”

But he is a man with a vision and the ability to realize it: “My hopes are to turn this 200-acre parcel at Cook and Frank Sinatra into a campus teeming with thousands of students, spewing out entrepreneurial graduates who will develop fields like computer sciences and life sciences and sports … so that in 30 years, this will be more than a resort area. We could have employment opportunities for kids who come out of college or high school who want to stay here.” The campus has an executive-in-residence program and visiting lecturers such as former Vice President Dan Quayle.

“Dick Heckmann has the contacts and energy to bring in world-renowned people to focus on big issues,” says Don Doyle, a lawyer and CEO of Acorn Technology Corp. in Riverside. He has known Heckmann since the early 1980s, counting himself among the local entrepreneur’s mentors. They first met in 1982 when Heckmann, then a stockbroker, sought Doyle’s expertise on behalf of clients who had invested in Walt Disney Corp. The company’s board of directors was about to pay a virtual ransom to a predatory shareholder to keep him from
seizing the company in a hostile takeover bid.

“Dick was incensed,” Doyle says. “He had no personal money tied up in this. He just thought Disney was in the wrong … and he invested a lot of time and energy taking this thing to court.”

In the end, the case changed California law when courts ruled the “greenmail” practice illegal. “Dick was a crusader, a person with passion, fighting for the principle involved,” Doyle says.

Heckmann says a good entrepreneur is “a self-starter, a risk-taker, a people person who has good judgment.” His advice to those who want to be great leaders is characteristically blunt and to the point: “If you want to be a great leader, do what a great leader does. Ignore the assholes. People who manage by intimidation get that way by being managed that way.”

Heckmann’s original career path was quite different from where he eventually ended up.

“In high school, I wanted to be a diocesan priest.” He nearly was, enrolling in Conception Seminary College of the Benedictine order in Missouri. But he left to join the Air Force during the Vietnam War, and his life took off in a different direction.

Looking back on it all, Heckmann says, “I’ve had phenomenal experiences — flying air-rescue missons in Vietnam, working in the [Carter] White House — there’s not much in the world I haven’t seen. But I wouldn’t want to do it again. I wouldn’t want to be 20 or 30 again … maybe 50. Now I’m into doing stuff — experiential stuff — so that when I go to my rocking chair, I can laugh my ass off.”