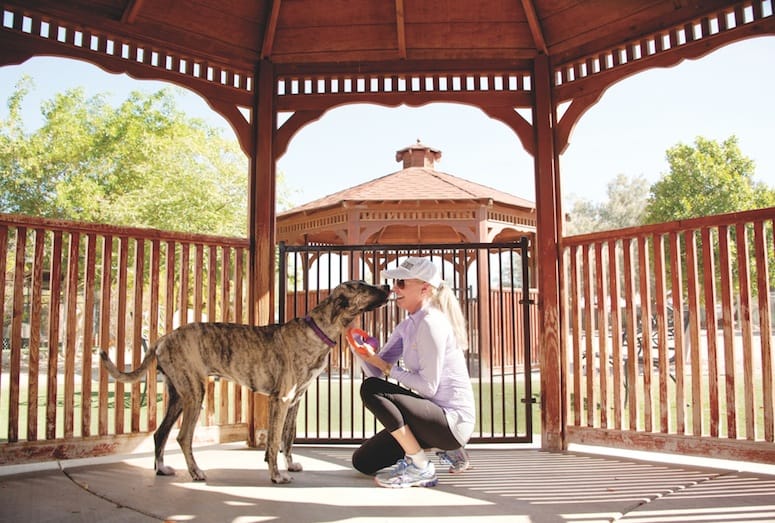 Twice a week, Richard Dodd makes the drive from his home in Mission Lakes to North Palm Springs. At Jalisco Tires, he turns right on an unmarked dirt road that leads him to the Humane Society of the Desert’s compound. Parking close to an entrance flanked by a statue of a dog circling a hydrant, he gets out of his car to visit his friend, Kathy.

Dodd and Kathy have been meeting here regularly for about 15 months. On Tuesdays, they usually sit around the shaded and misted lounging area. Sunday mornings you will find them hiking west into the desert toward a forest of giant white wind turbines. On several occasions, she has visited the Dodd household, but she prefers to meet Dodd on her own turf. A happy camper at the Humane Society of the Desert's Orphan Pet Oasis in North Palm Springs.

Dodd runs his hand gently over Kathy’s freshly shorn, sable-colored coat. He hands her a biscuit that instantly vanishes. Kathy reminds Dodd of a beloved Belgian shepherd he once had.

“Kathy has been here since she was just a few weeks old … and now she’s almost 11,” says Dodd, who works from home as a consultant. “She has never had a home outside of here, but she has lived here so long that this is her home. This is where she’s happy.”

Since it opened in this location in 1961 as little more than a tiny stucco ranch house and two small kennels across two acres, the Humane Society of the Desert (HSD), aka, the Orphan Pet Oasis, has grown to more than nine beautifully groomed and shaded acres with facilities for more than 150 dogs. Richard Dodd spends at least two days a week with his friend, Kathy, whom he hopes will one day exchange her home for his.

Though limited resources and staff keep the number capped at roughly 80 dogs and two dozen cats (there is also currently one rabbit), the grounds feel spacious and relaxed. Unlike many shelters where there is an air of confinement and fear hanging in the air, the Oasis lives more like a pet country club.

It’s not hard to see why Kathy considers it her happy home.

“She’s got quite a fan club,” laughs Malinda Bustos, president of the HSD since 2005. She notes that the Oasis attracts many people like Dodd who simply like to spend time with the animals. “Kathy has friends who bring her a new bed every month,” she adds.

On an early summer morning tour of the property, it’s impressive to see the enthusiasm and energy of the six staff members and four full-time volunteers who get their charges fed by 7:30 a.m. and then ready for their morning stroll. Every dog gets a walk every day. Among the dog-walking volunteers are a couple men who have come from Roy’s Desert Resource Center, a refuge for the homeless that encourages its clients to spend time walking dogs as part of their therapy. Though shy with humans, the men are clearly delighted by their four-legged companions. Two medical technicians at the Animal Hospital of Desert Hot Springs give a checkup to a poodle who had been surrendered to the Humane Society only a few hours earlier.

Bustos leads the way past the kennels toward a manufactured home toward the rear of the property. The home would not look out of place in any gated community in the area. However, except for a rotating shift of night supervisors, the inhabitants are all cats. To avoid very tired old jokes about “cathouses,” the staff prefers visitors to call the Barry Rescue Center, the “cat-eria.”

"Anne Barry was on our board for many years,” Bustos explains. “She left us around 75 or 80 thousand dollars, so I went out and bought this and we put it together.”

It is, in fact, a veritable cat paradise. The spotlessly clean house sports cat climbing towers and perching furniture, and every room brims with numerous toys plus private sleeping quarters. Unperturbed by human intrusion, a dozen or so cats stretch and wind through several pairs of legs. Other felines maintain their well-practiced insouciance atop their perches.  Mrs. Barry’s generosity points to the society’s strength both and vulnerability. Though they are a member of the national organization, the HSD is responsible for its own funding.

The staff prefers visitors to call the Barry Rescue Center, the “cat-eria.”

“We are totally dependent on fundraising. We do about four big events per year, including Le Chien with Palm Springs Life during Fashion Week,” Bustos says.  “Otherwise, we have to hope for generosity from our many friends.”

Not long ago, the HSD were recipients of a windfall that enabled them to acquire and open The Animal Hospital of Desert Hot Springs, a full-service veterinary medical hospital that provides a wide range of care from spay and neutering to complicated surgical procedures as well as dental services and general wellness. Bustos says that while special days are set aside for affordable spay and neutering for those in need, the hospital is run to efficiently produce a profit that can then be funneled back into strengthening services at the Oasis.

Kristen Landerson, a supervisor at the hospital, visits the Oasis twice a week to monitor the health of animals that have undergone various treatments. This morning, she and Bustos are gauging the progress of a big brindled fellow chilling in one of several wooden playground pagodas whose chronic hip dysplasia was corrected by surgery at the hospital. Every dog gets a walk every day.

“At some shelters, they have a policy of euthanizing puppies and pregnant or injured animals as soon as they come in the door,” says Bustos. “We have contacts at those shelters, and as soon as we hear about that kind of situation we go and get them.”

Unlike many shelters, the Orphan Pet Oasis at the Humane Society of the Desert is a true sanctuary. Their adoption percentage is an impressive 80 percent and no animals are ever euthanized. If they aren’t adopted, then like Kathy, they’ll always have a home … and a sanctuary. Animals will always have a home at the Orphan Pet Oasis at the Humane Society of the Desert.