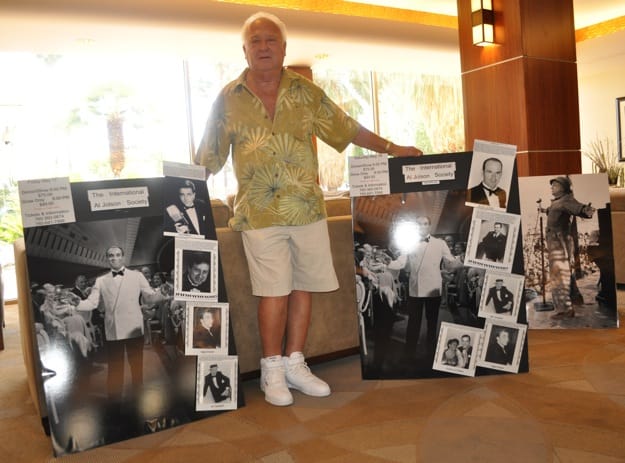 Al Jolson bought a house in the famed Movie Colony neighborhood in Palm Springs not once, but twice.

Jolson originally had a house built on Via Corta with his second wife, Ruby Keeler, in the late 1930s after the couple had spent considerable time at the El Mirador Hotel. Jolson sold it, but later came back to buy it again in the mid-1940s when his third wife, Erie Galbraith, happen to pick it out during a search of homes.

Jolson passed away from a massive heart attack in 1950 at the age of 64, prompting the formation of the International Al Jolson Society from scattered fan clubs across the U.S. The famed entertainer compiled more than 200 recordings on four record labels, starred in 11 films including Mammy and Rhapsody in Blue and was the creator/star of the Kraft Music Hall radio program, according to the website.

His legacy continues to be honored each year, this time in Palm Springs where the International Al Jolson Society will hold its 63rd annual festival, May 16-19, at the Spa Resort and Casino.

David Miller, publicist for the society and a Sun City resident, remembers listening to Jolson on 78 records when he was a kid. Later he watched Jolson on his family’s first television in The Jolson Story (1946) and Jolson Sings Again (1949).

Over the ensuing years, Miller began collecting Jolson memorabilia, including every album Jolson made, sheet music, and anything else he could find hunting antique stores.

However, it wasn’t until the late 1990s that Miller found out he wasn’t alone in his fascination with the entertainer. A friend pointed him to the society’s website, which now reaches around the world and will bring fans from England and Scotland to Palm Springs this weekend.

“My wife (Susan) and I have met so many wonderful people whose friendships continue today,” Miller said.

Jolson’s footprint can be found in other parts of the Coachella Valley as well. In 2000, Miller was instrumental in getting Jolson a place in the Walk of Stars in downtown Palm Springs, and in 2010 helped Jolson receive the General Patton Award from the General George S. Patton Memorial Museum for entertaining the troops.

In fact, Jolson performed before the troops in three wars (World War I, II and Korea), and paid his own way to Korea after receiving permission from President Harry Truman to make the trip. Jolson died a month after returning from Korea and following his death, Truman awarded him Medal for Merit posthumously.

“When you research Al Jolson and find out about his coming to this country as a young boy through Ellis Island and the love for his country, you understand why the lights were dimmed on Broadway when he died,” Miller said.

For information on attending the festival, visit the website.