Aluminaire House is Closer to Specific Location in Palm Springs 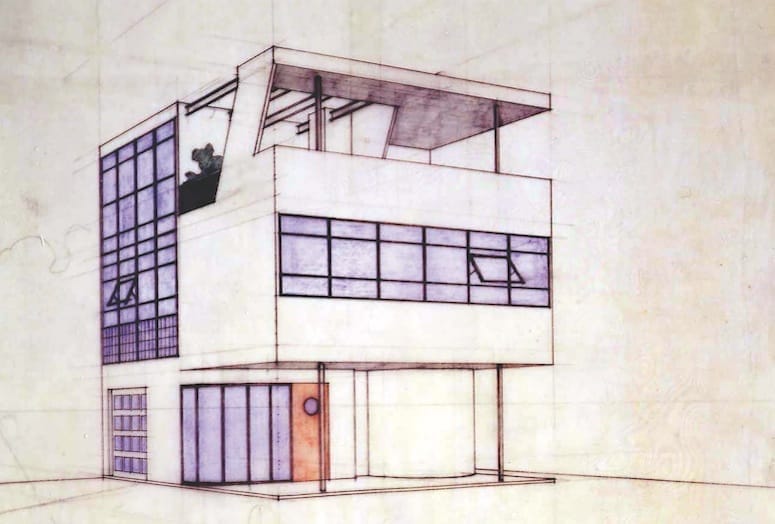 Two locations are under consideration to place the Aluminaire House: the future College of the Desert campus in Palm Springs, or on the property of the Palm Springs Art Museum.
PHOTOGRAPHS COURTESY ALUMINAIRE HOUSE FOUNDATION INC.

Three years after its initial arrival in Palm Springs, the Aluminaire House will have a home. Alan Hess, architect and historian who has written numerous books on modern architecture, discussed the Aluminaire’s 90-year history during his presentation at this year’s Modernism Week.

At the time of its construction, the concept of packing up and moving a home – all the way across the country – fascinated the public. “In the framework of the 1920s and 30s, it seemed like a really amazing, new idea,” says Hess.

Designed by architects Albert Frey and A. Lawrence Kocher, the Aluminaire was first constructed in 1931 for a public exhibition in New York. Today, it lies disassembled, held in storage until a final decision is made on its permanent location in Palm Springs.

Two locations are under consideration: the future College of the Desert campus in Palm Springs, or on the property of the Palm Springs Art Museum.

An announcement on the final decision is anticipated within the next few weeks, says Mark Davis, treasurer and board director of Modernism Week, who is also a committee member of the nonprofit, Aluminaire House Foundation. The foundation had been working with the City of Palm Springs for three years to include Aluminaire in the new downtown city park plans. However, tother options were pursued once the Downtown Development sub-committee eliminated Aluminaire from the original plans.

After the latest rounds of meetings, members of the foundation are all smiles. “It’s all good news,” says Davis. “The Aluminaire has a home!”

A home, which many have noted, will be permanently in Palm Springs – the city that has become known as a mecca for modern design, where Frey grew his legacy.

“To have this early example of his work here in Palm Springs, along with all of his other [designs], which are primarily in this area, really helps us understand Frey and shines a spotlight on his ideas,” says Hess. 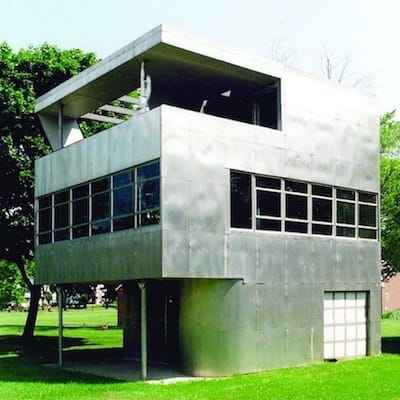 Designed by architects Albert Frey and A. Lawrence Kocher, the Aluminaire was first constructed in 1931 for a public exhibition in New York.

The Swiss-born architect came to the desert town by way of a cross-country road trip, an experience that was a major source of inspiration for Frey’s later designs.

The architect went on to shape over 300 buildings in the desert, many of which would only be recognized as significant posthumously. The Frey House II, the Cree House, and the Tramway Gas Station are just a few of Frey’s celebrated architectural contributions.

Intended as a model of functional, affordable housing made for the masses, the Aluminaire was the first home constructed entirely of light steel and aluminum. 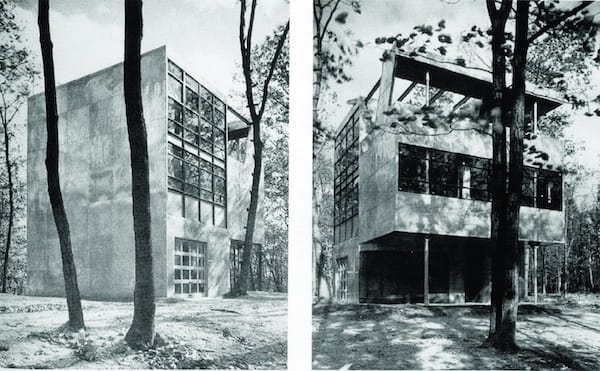 Architect Wallace K. Harrison bought the Aluminaire House for $1,000 and moved it to his Long Island estate in the 1930s. The house was relocated and rebuilt on New York Institute of Technology’s Central Islip campus beginning in 1988.

“What is unusual about the Aluminaire House is that it was very self-consciously all metal,” says Hess.

The name ‘Aluminaire’ has a futuristic sound to it, attracting a great deal of attention during its initial exhibition along with its box-like appearance. The core of the building is constructed with steel, and its exterior ‘skin’ is made of aluminum, an entirely brand-new material at the time. Alcoa, the aluminum company of America, funded most of the building’s construction.

Once the Aluminaire is reassembled at its new location, the house will be on view to the public. Davis emphasized the importance of its accessibility to local residents and visitors alike: “It will be extraordinarily meaningful for the city and for our architectural heritage tourism – for the world to be able to come see it.”