He was known locally as “the Mayor of La Quinta.” The title was never a formal one, even though he was once offered the official designation of “honorary mayor.” Nevertheless, he did as much as anyone to transform that space in the Coachella Valley into a place. Snuggled in among the Santa Rosa Mountains, La Quinta long ago earned a reputation as a destination for recreation, inspiration, and repose. And he played no small role in helping transform this sleepy community into one of the world’s premier winter havens.

He was Andy Williams. The kid from Iowa who ended up in Southern California, singing “Swinging on a Star” alongside his older brothers with Bing Crosby. Crooning with his siblings for MGM Pictures and starring with Kay Thompson in Las Vegas’ No. 1 nightclub act. Eventually, the brothers went their separate ways, and Andy became a regular on Tonight With Steve Allen, which he parlayed into a career as a solo recording artist known for hits such as “Butterfly,” “Lonely Street,” “The Village of St. Bernadette,” “Days of Wine and Roses,” and, of course, “Moon River.” Andy became Columbia Records’ leading light, the author of 17 gold records. He soon returned to television in his own right. The Andy Williams Show was a fixture on NBC for close to a decade, drawing the stars of stage, screen, and song to perform alongside the most beloved male vocalist of his era. Much of the public’s affection for Andy came from his Christmas records and his Christmas specials. Starting with the legendary Andy Williams Christmas Album in 1964, Williams became synonymous with the holiday season, whether you heard him on your turntable or transistor radio, saw his television specials, or watched him perform in person. 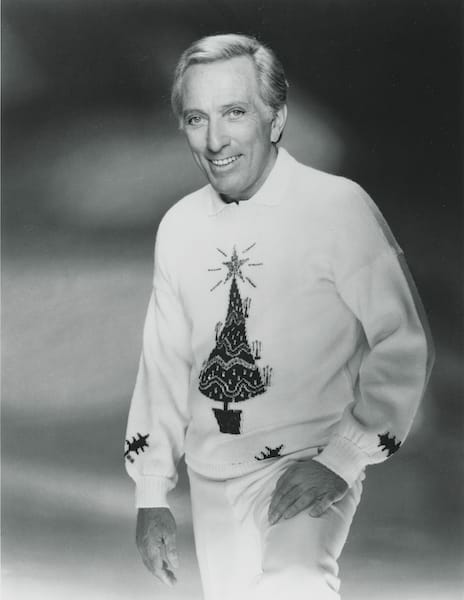 Amid all the hustle and bustle of a life spent in the spotlight, Williams made La Quinta his home. He moved to the area in 1965, purchasing a spacious but understated home for his family at La Quinta Country Club. Williams’ residence, which overlooked the freshwater Lake Cahuilla, served as the beachhead for his time away from show business. The singer’s presence in La Quinta and his boosting of the community helped persuade many others in the entertainment industry to make homes in the area. William Devane, Arnold Palmer, Captain & Tenille, and Dorothy Hamill all subsequently took up residence in La Quinta.

“Andy was a wonderful guy,” his friend Michael Dante remembers. Dante, a character actor, was a regular on a number of TV Westerns and soap operas and appeared in films such as Winterhawk (1975), Seven Thieves (1960), and Kid Galahad (1962). He hosted the Michael Dante Celebrity Talk Show, a long-running syndicated radio program that featured Williams as a guest in 2000. 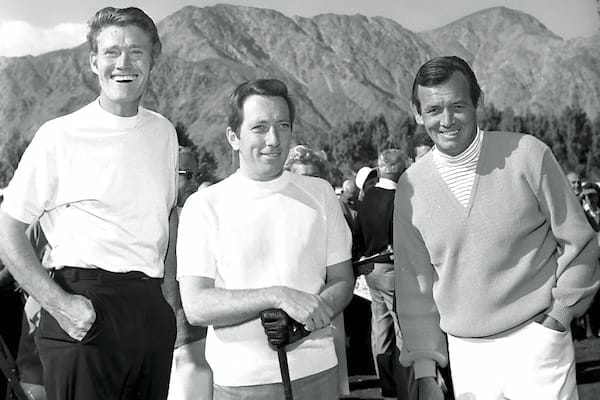 “Andy was such a down-to-earth guy and a red-blooded American patriot.” Like many of the singer’s friends, Dante met Williams years earlier through golf.

“We met up many years at the Frank Sinatra Golf Classic and became instant golf pals,” Dante says. “We spent so many long weekends together that it became like a family gathering after all the years together. We’d bring each other up to date.”

For decades, Williams played in between 10 and 15 charity golf tournaments annually. His own Andy Williams San Diego Open (1968–1988) was a highlight on the PGA’s January calendar. Williams’ association with La Quinta helped transform the area into a major golfing destination. The opening of the PGA West Stadium Course at La Quinta Resort & Club in 1986, which has served as the home of both the Skins Game and the Bob Hope Classic, further cemented the area’s reputation in golfing circles

Among Williams’ circle of golf-crazy friends, he counted fellow La Quinta stalwart Merv Griffin, Frank Sinatra, and Pierre Cosette. Cosette, who was also his agent and television producer, was known for transforming the Grammys into a major television event. Another member of his circle of close friends was Bob Cunard, the legendary nightclub owner and restaurateur.

“We had a common love of golf, music, and good food,” Cunard says. He remembers Andy livening up rounds of golf with small wagers on holes, adding some competitive juice to familiar fairways on La Quinta’s golf courses. 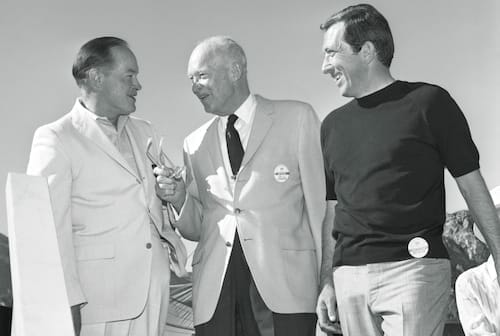 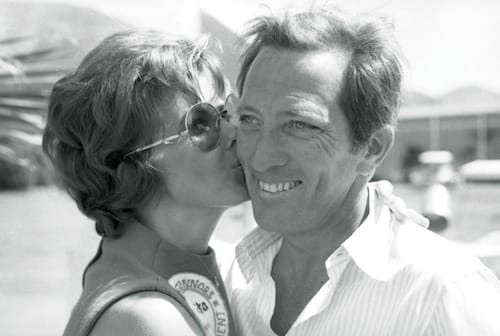 A fan gives Andy Williams some love at the Chuck Connors Charitable Invitational in 1969.

Cunard’s Sandbar, which recently celebrated its 40th year in business, was a regular hangout of Andy’s in La Quinta. The intimate, seasonal restaurant known for its fine cuisine and wine list, live piano music, and cool, casual feel was a place where he could relax among friends.

“He could come there, sit, and nobody would bother him,” Cunard recalls. “He never got up and sang. He didn’t want to take anything away from whomever was performing.”

Rivaling Williams’ interest in golf was his enthusiasm for fine art. The singer kept a large collection in his La Quinta home and his condominium in New York City. 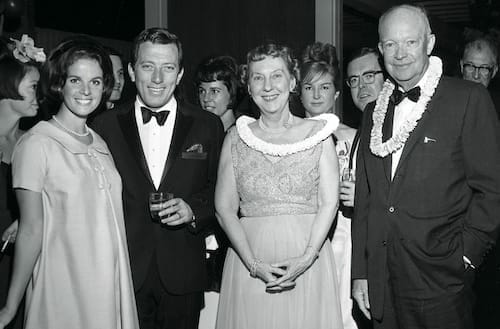 Claudine Longet, Andy Williams, and Mamie and Dwight Eisenhower at the Eldorado Country Club New Year’s Eve party in 1964.
“He surrounded himself with the things that he loved,” Dante recalls, thinking of his visit to Williams’ home in 2000 for his radio program. Williams and his wife, Debbie, were doting hosts and excitedly showed off their collection, which included works by titans including Willem de Kooning, Robert Motherwell, and Jackson Pollock. Williams also immersed himself in learning about Native American art, particularly Pre-Columbian art. 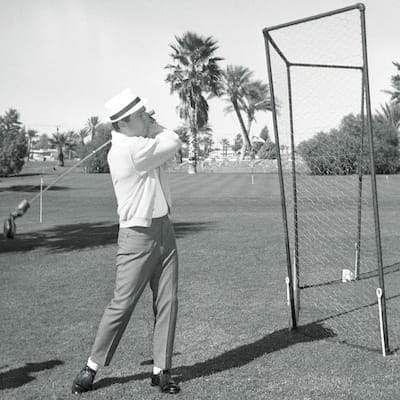 PHOTOGRAPH COURTESY PALM SPRINGS LIFE ARCHIVES
Williams’ interest in the fine and performing arts played no small role in what might be his most significant contribution to his adopted home: the establishment of the La Quinta Arts and Music Festival (later La Quinta Arts Festival) and the La Quinta Arts Foundation. The inaugural festival was held in March 1983, featuring dozens of artists from a wide range of disciplines. Williams and Merv Griffin helped secure venues and talent for performances and installations and publicize the festival. The singer later helped raise funds to buy the foundation a permanent home on Avenida La Fonda. Over four decades, the festival tallied more than $64 million in art sales, supporting scholarships for local students and arts programming for the city’s residents.

In 1992, Williams’ became the first non-country artist to open a theater in Branson, Missouri — the Moon River Theatre, a gorgeous 2,000-seat venue that became one of the top destinations in the emerging entertainment mecca. For the remainder of his life, Andy and Debbie Williams spent as many as eight months each year in Branson. Nevertheless, La Quinta remained his center of gravity.

“La Quinta will always be my home,” Williams told The Desert Sun in 1993. “It’s where I come back to.” True to his word, Williams remained deeply invested in the community, supporting causes such as the arts foundation and the Boys & Girls Club for many years. Many people say that Williams never met a stranger; he was incredibly gracious with his time and made sure the fans he met in person knew how much he appreciated their support.

Considering the degree to which Williams helped invigorate the community, La Quinta bears little in the way of formal recognition of its foremost citizen, who died in 2012. The city honored him with a street named Moon River Drive. “But nothing said Andy Williams, which has always bugged me,” Cunard says.
Then again, maybe this is fitting. Considering Williams’ humility and willingness to share the spotlight, the community he helped create is itself a durable tribute to the man known locally as “the Mayor.”

• READ NEXT: The Origins of the Agua Caliente Band of Cahuilla Indians' Trading Post.