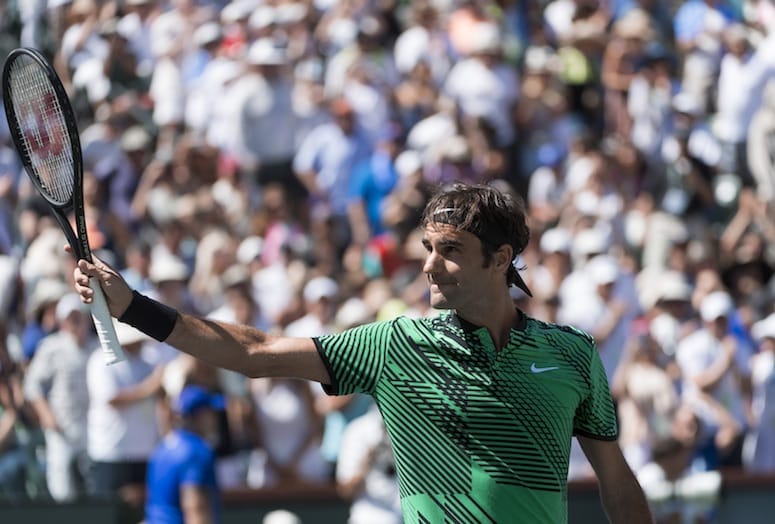 From the moment the sun rose Saturday on the BNP Paribas Open tennis tournament, it seemed like a Swiss can’t-miss. And that’s what it turned out to be.

Wawrinka started the day with an uneventful 6-3, 6-2 semifinal win over first-time Masters Series semifinalist Pablo Carreno Busta of Spain, who played with a deer-in-the-headlights look for most of the match. Wawrinka, while never quite reaching the acclaim of the men’s game’s big four (Federer, Novak Djokovic, Rafael Nadal and Andy Murray), has won three majors and will be the highest-seeded player in Sunday’s 1 p.m. final, in the sure-to-be-packed, 16,100-seat Indian Wells Tennis Garden. He is ranked and seeded No. 3. Federer is No. 9.

Federer’s semifinal opponent Saturday, U.S. player Jack Sock, had a similar dazed look in the first set against the game’s current leading legend. It took 21 minutes for Federer to slash and dash and render Sock mostly helpless. The score was 6-1 and it left many in attendance feeling amazed, yet again, at Federer’s skills at age 35, while feeling sorry for Sock, who at age 24, was being taken to the woodshed by a father-figure.

To Sock’s credit, he took a break off-court after the first set, gathered himself and played the kind of competitive second set that gives US. tennis fans hope for the future. He saved the one break point Federer had in the set with a cagy, 115-mile-an-hour serve into the body, then held his own into the tiebreaker. He even got up a minibreak at 2-1, but then, on his own serve at 4-4, his backhand suddenly became inoperable. He hit one long to give Federer two serves at 5-4 and then netted two more for the match.

The word “elegance” does not often find its way into sports stories, but it works with (Roger) Federer. His court presence has an understated rhythm, a kind of a ballet of motion that makes it look as if what he does, and what he achieves, is effortless.

It was a 6-1, 6-7(4) victory for a 35-year-old man with four kids and such a wonky knee that he missed six months of last season. That’s the same 35-year-old man who had won more major titles (17) than any other male and who showed up at the year’s first major in Australia in January thinking only of taking baby steps toward a comeback.

Then, of course, he won the Australian Open, beating his arch-rival Rafael Nadal in five long sets. It was now 18 major titles. 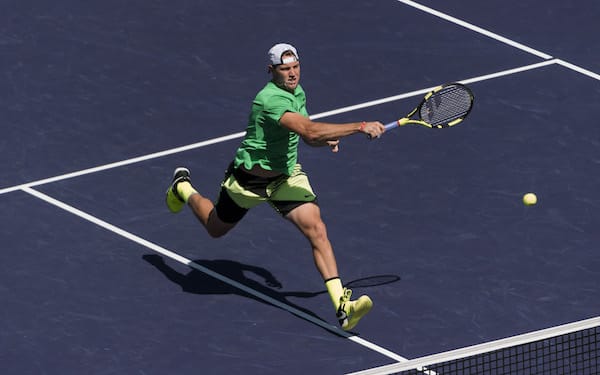 To Jack Sock’s credit, he took a break off-court after the first set, gathered himself and played the kind of competitive second set that gives US. tennis fans hope for the future.

The sports world shook its collective head and speculated that it was Federer, not Ponce De Leon, who had found the fountain of youth.

Federer played with little zest in Dubai, said he was tired, and then showed up here and found himself on the side of the bracket–quickly labeled the Draw of Death by writers with alliteration issues–that included No. 2 Djokovic, No. 4 Kei Nishikori, No. 4 Nadal and No. 6 Marin Cilic. Poor old Roger, still trying to gather points to get back in better seeding position, was No. 9.

Then, in a flash, there he was, the conqueror of the Draw of Death, having scooted through it by facing just one break point (in the first set against Nadal) and looking very much like the player who had won here four times before and had spent a record 302 weeks as No. 1 in the world.

“You look at that section,” Federer said, “and it looks like a mountain to climb. The next thing you know, you are in the final. It can go quickly like that.”

He said that being No. 1 again, not impossible if he wins another Grand Slam tournament, is not his highest priority. He obviously had a face-to-face conversation with himself after his injury. It happened somewhat ignominiously when he was lifting one of his kids out of the bathtub. For starters, he decided he’d play less. He would also make the decision as to when and where to play based on criteria different than a rush for rankings. Indian Wells is a perfect example of this new criteria.

“I want to play for people who want to see me,” he said, “and see that I’m excited to be there.”

To say Indian Wells fans get excited to see Federer is an understatement.

Sock, a midwesterner who made sure people remembered his name Saturday by wearing bright yellow ones, was seeded 17th and, along with USC star Stevie Johnson, may be taking over John Isner and Sam Querrey’s spots as the top U.S. men’s hopes. Sock’s playing style is an interesting contrast to Federer’s. He has a wristy forehand that, on a given day, can be dominating. His game is like his name. Jack Sock. Bam Bam. No subtleties. He flails while Federer floats.

The word “elegance” does not often find its way into sports stories, but it works with Federer. His court presence has an understated rhythm, a kind of a ballet of motion that makes it look as if what he does, and what he achieves, is effortless. Sports images can be built on what you do, but often more on how you do it. How Federer does what he does, especially at an age when other tennis players are not only retired but focusing on ice-packs and Advil, remains a mystery. A basketball writer once wrote that the hall-of-famer Oscar Robertson, who had a unique gliding style, was “too slick too sweat.” If Federer sweats, you’d never know it.

Federer has won almost everything that matters in tennis, including a team Davis Cup, and at least one of every major. He even has an Olympic gold medal, although not in singles (he has a silver). He won the doubles gold in Beijing in 2008. His partner was Wawrinka.

“At first,” Federer said Saturday, “I thought Stan was going to be mostly a clay court player, but I’m impressed the way he has grown his game. I’m his No. 1 fan. I have given him a lot of advice over the years, but now, he is his own man.”

Their head-to-head matchups show Federer leading, 19-3. The only time Federer lost a final to Wawrinka was the only time they played one: the 2014 Masters in Monte Carlo. Federer won both times they have played here in the desert.