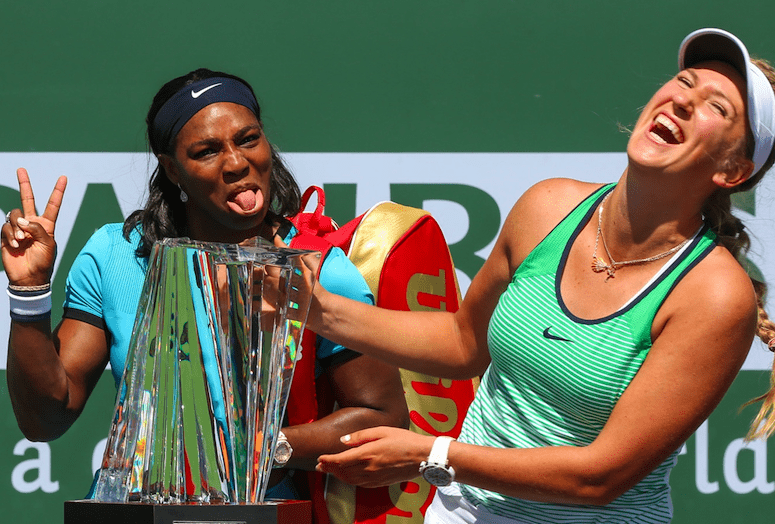 What should have been the best of times in Sunday’s Indian Wells women’s tennis final turned into the worst of times. Also, perhaps the strangest of days in the history of the BNP Paribas Open.

The tennis result was an upset of Serena Williams by Victoria Azarenka. The off-court stunner was a shocking, uncharacteristic, and sexist statement by the tournament’s chief executive.

An hour or so before Williams met Azarenka on the court, Raymond Moore, longtime official and visionary in making this ATP World Tour 1000 Series event the best of its kind, held his annual morning breakfast chat with the media on the day of the finals. In the midst of the usual happy talk about attendance and scheduling and whether or not his event should be given a higher classification in the tennis world, Moore was asked a vague and general question about the women’s tour, the WTA. For reasons unknown and perhaps never to be explained, Moore stepped hard on his tongue.

“You know, in my next life …” Moore said, “I want to be someone in the WTA, because they ride on the coattails of the men. They don’t make any decisions and they are very lucky. They are very, very lucky. “If I was a lady player, I’d go down every night on my knees and thank God that Roger Federer and Rafa Nadal were born, because they have carried this sport.”

As Williams and Azarenka took the court, the media buzz had begun. The Twitter world waits for no one or no thing.

Had Moore not said what he said, Williams was the big story, win or lose.

She had been booed 15 years ago when she won her most recent title here. She had made that final when her sister, Venus, defaulted. The boos during that final were perceived to be racist by some, economic by others, because ticketholders were deprived of the semifinal match they had paid for. An angry Williams didn’t return to the tournament until last year, and this was her first appearance in the final since then.

When she lost, 6-4, 6-4, to a gutty, hard-charging Azarenka, the story of her return took center stage at the awards ceremony. Moore publically thanked her for coming back “as the last brick in the wall” and a teary Williams thanked the crowd for its support. Then Azarenka thanked Williams for raising the bar in women’s tennis and, in doing so, making her work harder.

But the warm and fuzzy quickly cooled to prickly. Williams, who was told of Moore’s remarks when she left the court, said, “I don’t think any woman should be down on their knees thanking anybody like that… I think those remarks are very much mistaken and very, very inaccurate.”

Azarenka said, “I don’t understand any man’s comments in general towards women, because, as simple as that, every single person on Earth was brought and was born by a woman… We’re better at taking opportunities and being graceful. Why do you have to make that comment? Who cares? Simple as that. Just to make more drama or jokes?”

There was nothing funny about Azarenka’s incredible performance.

She came in ranked 15th in the world, or 14 spots lower than Williams. Despite having two Australian Open titles, she had been struggling through years of injuries and was perceived to be less of player than she was in those Australian Open years.

But she also has always been perceived as one of the few players on the tour who consistently can stand up to Williams’ power and pace. And that is exactly what she did Sunday, in front of an enthusiastic sellout crowd of 16,100 on the Indian Wells Tennis Garden’s main stadium. Victoria Azarenka and Serena Williams both enjoy the moment.

Williams started slowly, as she tends to do, and then put herself in position to turn the first set around, as she tends to do. She got three break points with Azarenka serving at 4-3, but a stubborn and scrambling Azarenka refused to yield, held serve and served out the set with a love game at 5-4.

Things went similarly in the second set. An out-of-sorts Williams played too many loose points in the beginning and allowed Azarenka to get out to a 5-1 lead. Azarenka served for the match at 5-2 and lost the game. Williams has made so many comebacks in like situations that the pressure was mounting on Azarenka.

But the tough-minded, 26-year-old from Belarus, facing two break points at 5-4, saved both and won the match when Williams uncharacteristically caved and made two mistakes from deuce.

“I don’t think I got tight,” Azarenka said… “I still stuck to what I believe was working for me, and in the end, it paid off.”

Moore eventually released a statement of apology. But even the most important male player of the day, and these times, couldn’t mount much of a defense for Moore’s pro-male outburst.

“We have to be fair to say that it was not politically correct,” said Novak Djokovic, men’s No. 1.