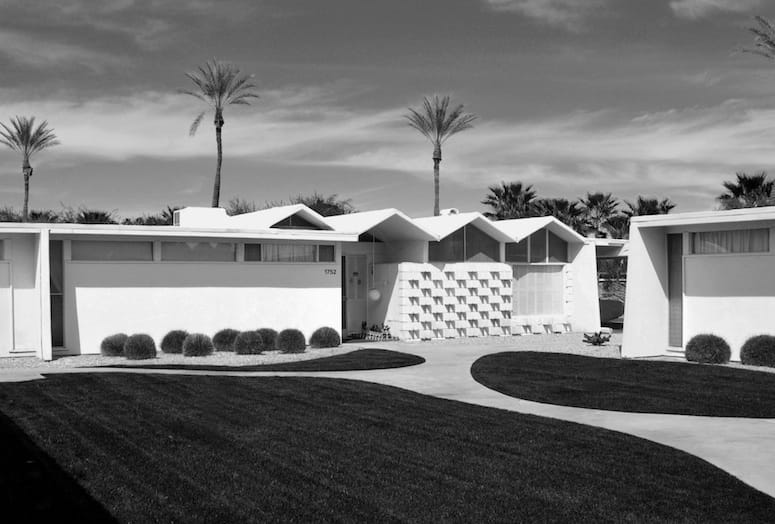 Barry A. Berkus may not be as well known as some of the other architects who designed midcentury homes in Palm Springs, but his impact was still influential.

“From what I understand, the bulk of his career was Santa Barbara based,” says Gary Johns, a realtor with The Paul Kaplan Group and vice president of the Palm Springs Preservation Foundation. “But he did two significant projects in Palm Springs—Park Imperial South and Merito Manor.”

The homes in both communities have the same folded plate roofs and the same floor plans, but Merito Manor has only 10 units, while Park Imperial South has 30. “I would credit Barry Berkus and Park Imperial South for having really good open space around the units,” says realtor Gary Johns. “It would certainly be considered low density and the homeowner’s association has made real strides in converting landscape to drought tolerant and desert. There are beautiful walkways throughout the property.”

“They ended with a cocktail reception with Barry Berkus and he addressed the crowd and acknowledged the homeowner’s association of Park Imperial South for recognizing the architecture, preserving it, and making strides to improve it,” says Johns. Berkus passed away in 2012 at age 77.

In addition to their folded plate roofs, the homes at Park Imperial South, which were built in 1960, are distinguished by their convertible den or third bedroom. Folded plate roofs are one of the community’s distinct architectural features.

“It was partitioned off by what could only be described as a shoji screen,” says Johns. “The screens all stack to one side and are a very decorative element. And when you needed to close off that den/convertible bedroom, the shoji screen slide along a track and closed off that room and truly made it a convertible space.”

Another design element Berkus employed in the 1,400-square-foot homes, which all have private patios, is the use of terrazzo flooring in the entryway. The shower pan and the floor under the toilet is also terrazzo.

A color rendering from the original brochure advertising the community.

Luckily, most of the homes retain their original midcentury details.

“In the 10 years I’ve been in Palm Springs, I’ve sold probably five to seven units in Park Imperial South,” says Johns. “If insensitive changes were made by previous owners, the person purchasing those units today is doing a restoration and doing as much as they can to return the units to their original condition. It’s very unlikely that someone would buy in Park Imperial South today and install stained glass next to the front door. That’s being undone.”