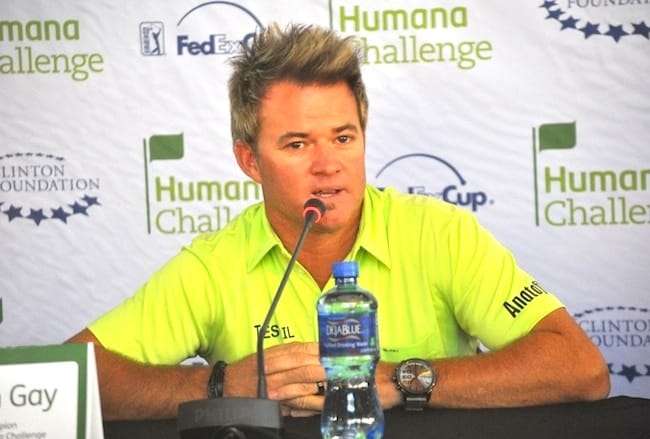 Brian Gay couldn't have hoped for a better start to 2013 than winning the Humana Challenge.
Jim Powers

The defending Humana Challenge (formerly the Bob Hope Classic) champ returns to defend his title when the 2014 version tees up Jan. 13-19 at PGA West in La Quinta.

Last year’s win was particularly timely for Gay, who was in the midst of a nearly three-year drought from a tourney title and had never captured a tournament in a playoff. He accomplished both at Humana.

“It made it a little extra special after having that big a gap,” Gay said of finishing first. “And to do it the way it all unfolded in the playoff, all my other wins I've been, I had pretty good leads or at least leading on Sunday.”

Winning Humana led to Gay’s selection as PGA Player of the Month and invitations to bigger tournaments, like the Master’s closer to his home in Florida.

“I guess the biggest thing was just winning so early and how it set everything up,” Gay says, “and winning before the Masters so it got me back there, which is my favorite tournament, a tournament I dreamed about my whole life of winning. And I was looking forward to getting back there and trying to do that again. It was just a lot of buzz early in the year, which was different. It was really cool.”

What were your thoughts on the last day of last year’s tournament?
“Scott Stallings had a pretty big lead starting that day, so I just had the mindset of going out, shoot as low as I can and see what happens.  And I got hot, was way under par early and fortunately ended up in a playoff, but I caught some breaks for that to happen.  I actually missed a birdie on the last hole and I thought, ‘Well, that's it for me.  I'm probably going to finish one short’.  And then came a couple other guys, one guy hit it in the water ‑‑ you just never know what's going to happen.  So I was waiting and then all of a sudden, boom, we're in a playoff and it all happened really fast. But it was exciting playoff, and I was lucky enough to make a couple of birdies to win."

One of the big changes at the Humana Challenge over the last couple years has been the format. From five days to four. Four courses to three.  Fewer amateurs. Are those improvements in the field in your estimation?
“I think it is. I think that five to four is a big change. Especially every year coming from Hawaii. It's tough to get back, get acclimated and have to start a tournament on a Wednesday. You kind of lose a day coming back from Hawaii over here with the redeye or you just can't really do that or fly all day. So I think that's a definite improvement. And as far as the logistics, having the courses closer together, not having to drive 20 or 30 minutes in between courses and different weather conditions at different places, I think it works out better and it's fairer for the competition as well.”

You look like you're in pretty good shape. What’s one thing other than playing golf that you do to stay in shape?
“Oh, I just lay on the couch (laughter.) No, I'm kidding. Recently I've admittedly do not have a great diet. And I've just sort of the last couple weeks changed some things about what I'm eating and probably eating.  So maybe it's because I've been thinking about this and it's changed me. But, no, I do a little bit of working out throughout the year and I have a trainer on the Tour. I'm not as excited about working out as I used to be, but I still try to get in there and do a little bit.”