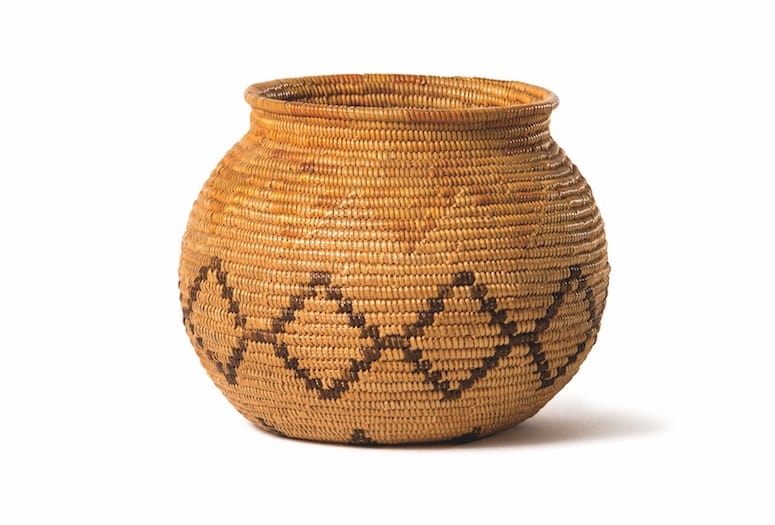 For those who love to learn, there’s no richer indulgence than spending a day at a museum. A handful of these enlightening destinations offer a unique portal into Cahuilla heritage and Native American culture, allowing visitors to discover ancient artifacts, admire time-honored craftsmanship, and stroll fragrant gardens filled with native medicinal and culinary plants.

Mark your calendar for 2020 when the new Agua Caliente Cultural Center Museum and Spa & Bathhouse in downtown Palm Springs is unveiled, opening its doors to a thought-provoking experience that touches upon all the senses, from an outdoor gathering plaza and oasis trail to a 40,000-square-foot spa and bathhouse at the site of the Tribe’s revered Hot Mineral Spring. This state-of-the-art cultural center designed to share the history and traditions of the Agua Caliente will preserve and showcase the Tribe’s narrative in an unrivaled setting.

Until then, our roundup of dynamic hidden-gem museums and iconic institutions invites you anytime to explore some of our country’s oldest — and most significant — Native American treasures.

The experience: California’s first museum founded by Native Americans sits off the I-10 on the Morongo Indian Reservation, where it opened in 1965. The museum impresses visitors with a broad collection of artifacts, such as baskets, pottery, and tools from Southern California Indian tribes, especially the Cahuilla. Knowledgeable staff can answer questions about artifacts on display, even beyond the written explanations of their cultural significance. Before you leave, check out the educational books they publish on Cahuilla history, among other informative titles.

Must see: The Temalpakh native plant garden, which features local species used in Cahuilla daily life for food, medicine, and shelter. Signs provide both English and Native American spellings of each plant. Along the dry streambed lies a massive collection of mortars and pestles. 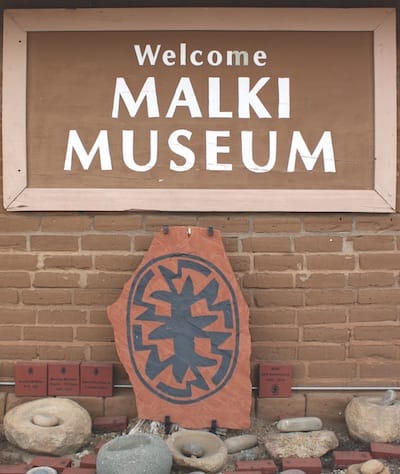 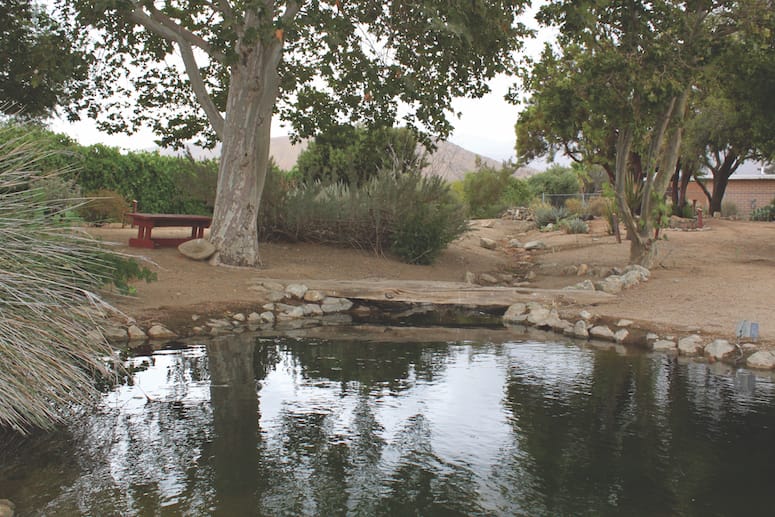 The experience: An agave roasting pit, grinding stones (metates), replica ollas (ancient clay pottery), and plants harvested for sustenance and therapeutic benefit are among the elements in this educational garden. 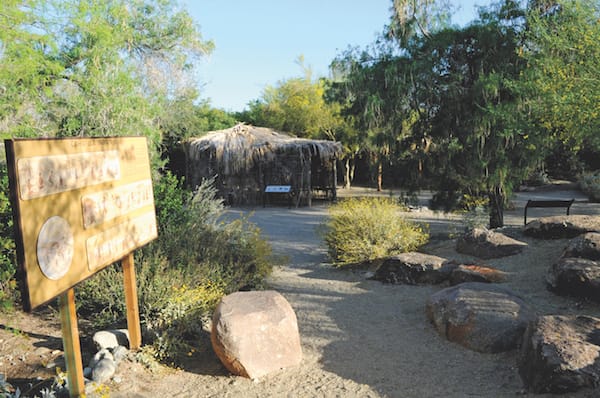 The Cahuilla Ethno-botanical Garden at the Living Desert Zoo & Gardens in Palm Desert.

The Living Desert’s plant collection features more than 1,400 different species; the Cahuilla Ethno-botanical Garden specifically holds essential botanicals used for food, fiber, medicine, and building materials since the Cahuilla first made the Coachella Valley and the surrounding mountains their home. Signs identify each plant and reveal its significance, in conjunction with exhibits on various facets of early Tribal life, including the palm oasis and the Cahuilla kitchen, house, and storytelling.

Must see: The kish, a reconstruction of a traditional Agua Caliente dwelling, fashioned to allow air flow in summer and retain warmth in winter.

The experience: A single visit affords guests the chance to roam the Smiley-Tyler House (a 1926 adobe home), the historic 1909 Indio Schoolhouse, and the only date museum on the planet, plus a blacksmith shop and detailed archives on the Cahuilla Indians. Enveloping the buildings are a date grove, rose garden, Japanese garden, desert garden, and the oldest cork oak tree in the valley. The museum seeks to share the history of the desert and the Cahuilla Indians, date farmers, and pioneers who forged through a difficult environment to create the present community. Exhibits showcasing examples of baskets, mortars, grinding stones, and other artifacts pay homage to the area’s original inhabitants.

The experience: You’ve never seen anything like it. Some say adventurer Cabot Yerxa was inspired to build this Hopi-style pueblo after he saw something similar at the 1933 Chicago World’s Fair. Whatever sparked his desire spurred him on for 24 years; he passed away at age 83 before its completion. 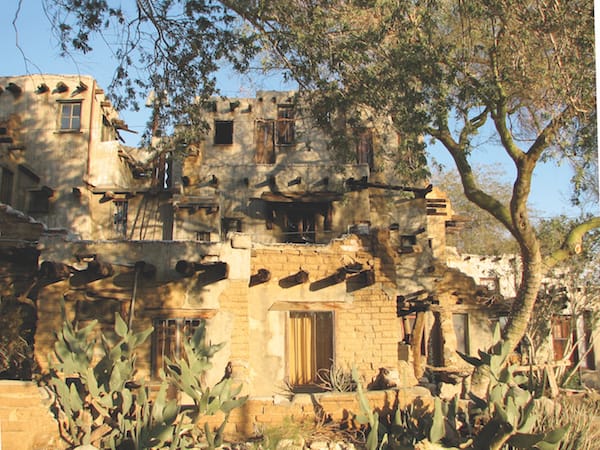 Book your spot on a docent-led tour to learn the full story as you squeeze through 35 rooms packed with unusual finds, including artworks, Native American pottery, early 20th-century photographs, artifacts from Yerxa’s Alaskan journeys, and memorabilia of early desert homesteader life. Grounds include the Pueblo Art Gallery, a bookstore, a shop with museum-quality art and artifacts, and the famed Waokiye sculpture, a towering 20-ton Indian monument carved from a single sequoia redwood.

Must see: A guided tour, as well as interacting with artists moved by the High Desert setting who frequently work on-site. 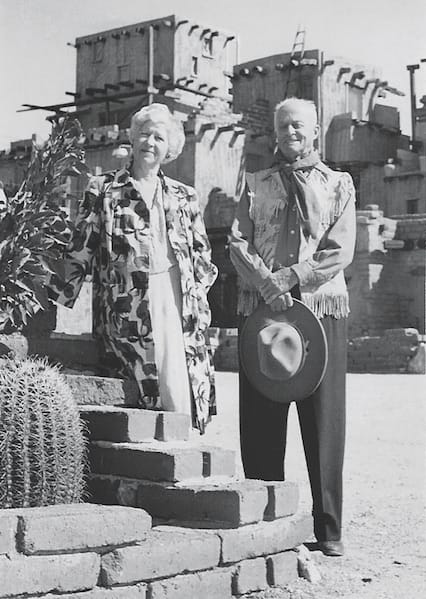 Autry Museum of the American West

The experience: This specialized museum inside Griffith Park houses an important collection. While a portion is undergoing relocation, several exhibitions at any given time spotlight meaningful Native American art and rare artifacts. At the entry point to “Human Nature,” visitors encounter a California-shaped display with 50 stunning objects and artworks made from natural materials found statewide and representing more than 25 tribal communities. As an exploration of culture and ecology in the California landscape, the exhibit vividly incorporates Native American objects and contemporary artworks, photography, soundscapes, and multimedia displays that highlight present-day tribal communities. 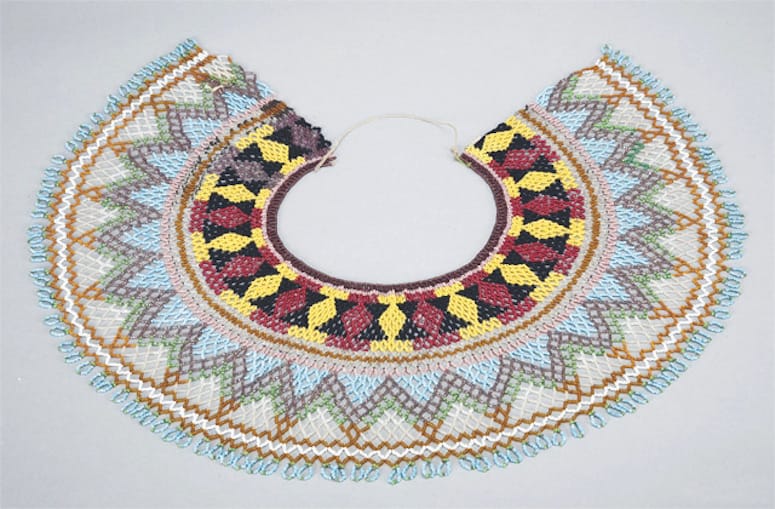 A beaded Native American necklace at the Autry Museum of the American West.

The experience: The “First Californians” permanent installation showcases the Bowers’ extensive collection of Native American artifacts in stone, shell, plant fiber (through spectacular basketry), and feathers, giving special attention to the resilient groups that inhabited Southern California’s coastal regions. Details reign on pieces that include a traditional dance skirt made from glass beads and braided grasses, a century-old ceremonial headdress, a pair of beaded infant moccasins from 1890, and a painted wood shaman’s mask.

Must see: The Cahuilla are known for finely coiled baskets with intricate designs. Appreciate their choice of materials and patterns here among baskets made by other tribes from across the state. (Most Cahuilla baskets, for example, use juncus, a grass that naturally ranges from yellow to warm orange and provides an eye-catching variation of color.) 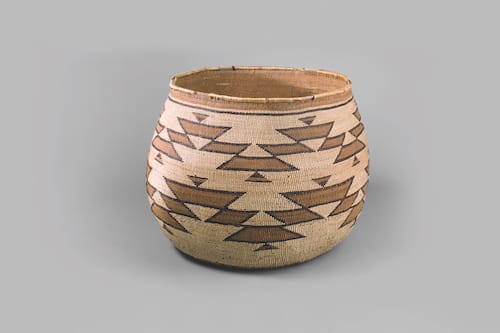 One of the baskets on display at the Bowers Museum. 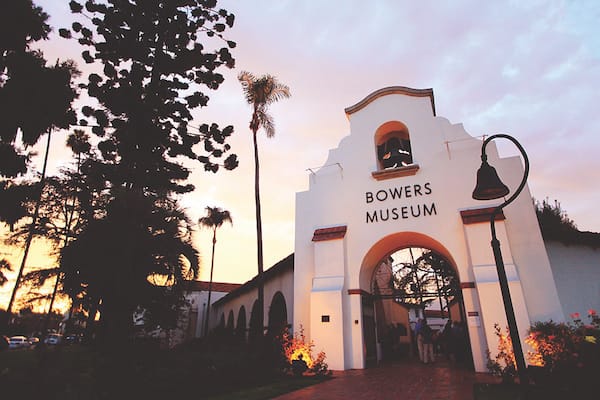 The experience: The Kumeyaay are the Native American people of present-day San Diego and western Imperial counties and Northern Baja. The exhibit “Kumeyaay, Native Californians” explores their traditional arts of pottery and basket making, food procurement, dress and adornment, medicine, games, and ceremonies. 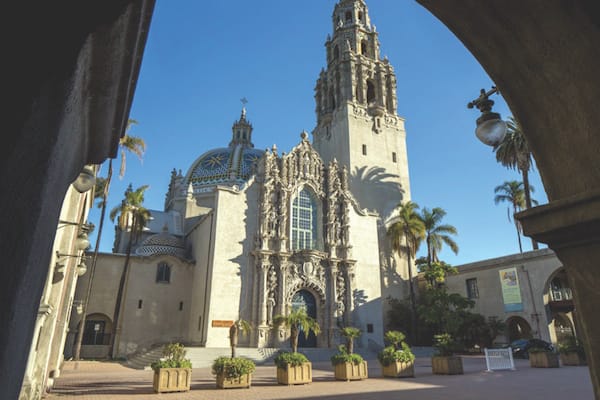 Museum of Man in San Diego.

Today, the Kumeyaay are present in 13 bands on reservations throughout San Diego County, with four additional bands living in Baja, Mexico. Artifacts and photographs highlight their rich cultural heritage and offer a glimpse of the life led by the tribe’s ancestors.

Must see: The first museum exhibit about Kumeyaay astronomy based on their generations of studying the night sky. This new extension of the main Kumeyaay gallery explores the traditions and meanings of their deeply rooted cosmological beliefs.

The experience: Ya’i Heki’ (pronounced yahee ehkey) is Cahuilla for “Home of the Wind.” This free, Friday–Sunday museum at the Lake Perris State Recreation Area combines breathtaking lake views and architecture that embraces the hillside with interpretive exhibits on the tribes of the Mojave Desert, such as the Cahuilla, Chemehuevi, Cupeño, Gabrieleño, Luiseño, Serrano, and Vanyume. Gain insights into these tribes’ cultures by way of baskets, pottery, photos, and ornate murals. 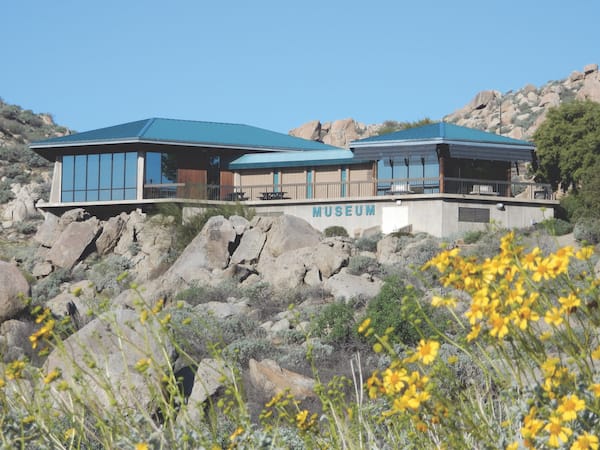 Many artifacts were unearthed by archaeologists during the excavation that created Lake Perris. Ask about events at this California State Park museum, from stargazing to tasting native foods.

Must see: Murals by Robert Freeman, a Luiseño Indian who designed the California Indian Seal. Also, a pictograph and a petroglyph carved into the rock on-site.

The experience: This museum is set on a campus established in 1901 as a federal school for the education and assimilation of American Indians. Spanning galleries, a garden, research library, gift shop, and photo collection, the museum depicts Native American life at an Indian boarding school through photos, yearbooks, and other memorabilia. Exhibits chronicle the school’s early days of forced assimilation to its current focus on cultural education. An ethnographic room filled with private donations showcases California basketry, beadwork, and contemporary artwork. More than 2,000 catalogued artifacts of American Indian origin are housed in this Riverside Cultural Heritage Landmark that is on the National Register of Historic Places. Despite its limited hours, many love the active schedule of paid hands-on workshops ranging from Native American toys and games to native plant uses, rock art, music, and basketry.

Must see: A stunning buffalo robe donated by a local actress; it was hand-painted by a famous flute maker and artist.

The experience: Tour the eclectic rooms of this folk-art-meets-Tudor-Revival-style home to discover prehistoric and historic American Indian artifacts from the personal archives of two passionate collectors who maintained the museum before it became part of the state park system. Museum founder Howard Arden Edwards, a self-taught artist, built the unusual structure (situated atop granite rock formations) by hand with his son, and it opened to the public in 1932 as a place to share his myriad collections, from arrow points to pottery to necklaces. Now, more than 8,000 objects represent 120 Native American cultures from California, the Southwest, and the Great Basin, with an emphasis on the region’s 4,000-year-old Antelope Valley trade route crossroads. Every October, visitors enjoy dancers, music, artist demonstrations, and storytelling at the American Indian Celebration.

Must see: California Hall, where the founder’s original 1930s exhibits are preserved to illustrate how the interpretation of American Indian cultures has evolved.

National Museum of the American Indian 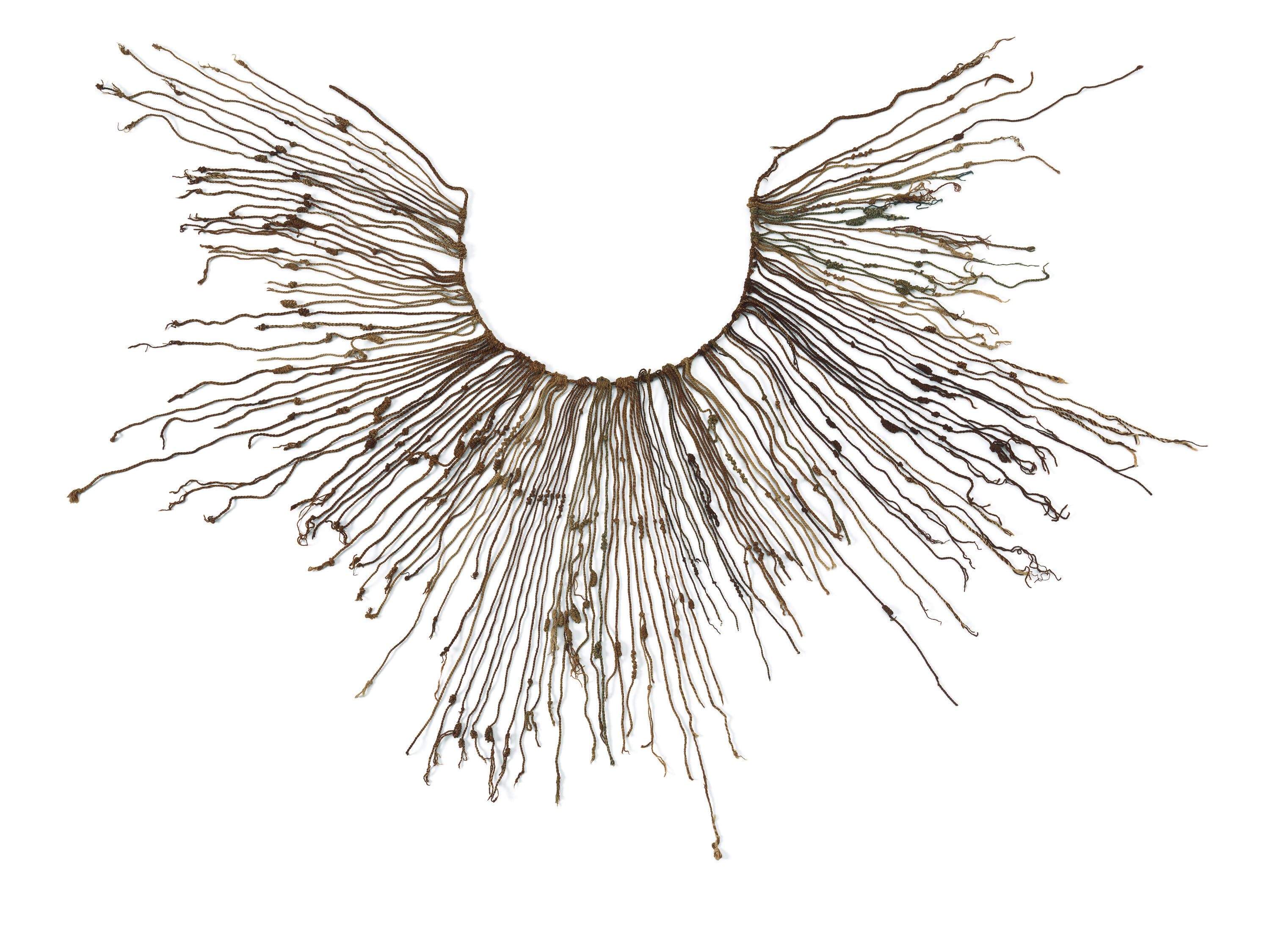 National Museum of the American Indian in Washington, D.C.

The experience: Sweeping architecture, indigenous landscaping, and exhibitions designed in collaboration with tribes and communities from across the Western Hemisphere authentically capture the spirit of Native America. As part of the Smithsonian Institution complex, this landmark holds one of the most expansive and diverse collections of Native artifacts in existence, boasting items from the Arctic Circle to Tierra del Fuego. The Agua Caliente play a part in the “Nation to Nation: Treaties Between the United States and American Indian Nations” exhibit that focuses on California. Through 2022, the “Americans” display sparks intense conversation by highlighting the ways in which American Indians have been intrinsic to the nation’s identity since before the country’s European colonization. The anticipated Agua Caliente “Section 14: The Other Palm Springs” exhibition opens Feb. 7, 2019.

Must see: The yellow 1948 Indian Chief motorcycle on the third level, considered the most stylish model on two wheels. Its fender ornament is an Indian figure with headdress. 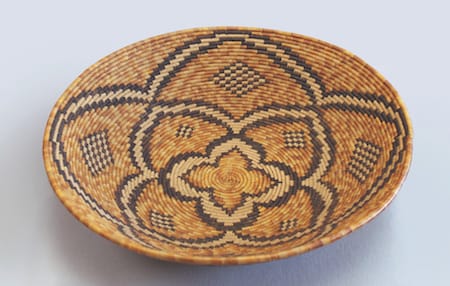 The Agua Caliente logo basket is currently housed at the Riverside Metropolitan Museum, which is under renovation. 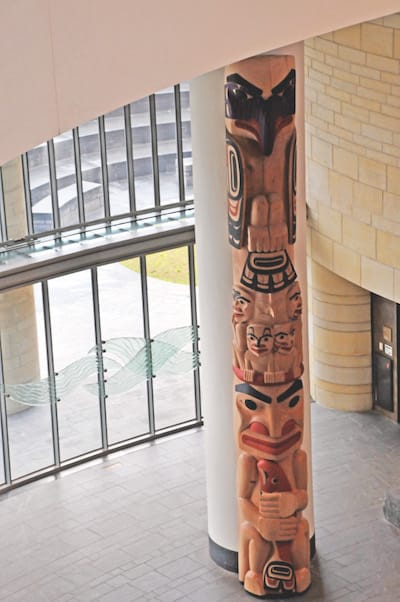 National Museum of the American Indian in Washington, D.C.

This story originally appeared in MeYah Whae, The Magazine of the Agua Caliente Band of Cahuilla Indians, Fall/Winter 2018-19. To read the current digital edition, click HERE.