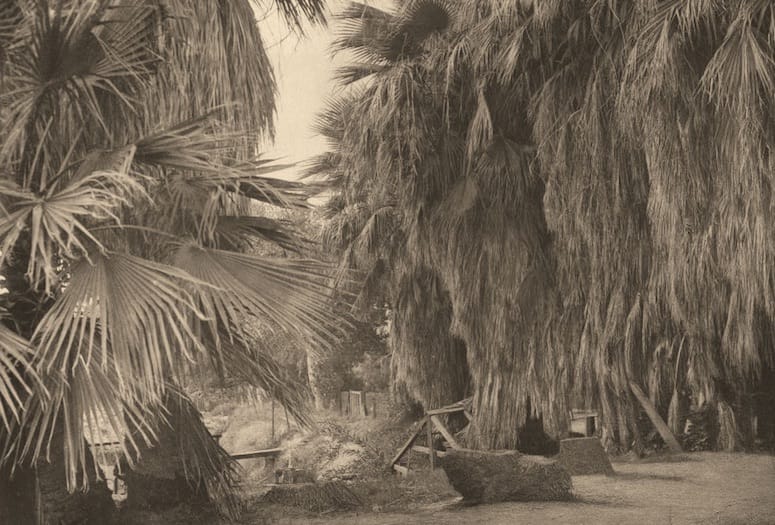 Holding a basket atop her head, a Cahuilla woman with long hair flowing down her unclothed back stands barefoot at the edge of a stream in Palm Canyon. Towering palm trees reflect in the small, sun-kissed pool of water and provide precious shade from the broiling sun.

Edward S. Curtis set up and photographed this scene, captioned “Before the White Man Came — Palm Cañon,” in 1924 while documenting the Cahuilla people on the Agua Caliente Indian Reservation in Palm Springs for The North American Indian, his magnum opus spanning 1900 to 1930.

It consists of 20 volumes of ethnographic writing and 2,226 sepia-toned photogravure images recording more than 80 tribal groups, from the northernmost Inuit or Eskimo people to the Hopi and Cahuilla in the Southwest.

Curtis’ entry on the Cahuilla Indians reveals great detail about life on the Agua Caliente Indian Reservation. For instance, he describes the basket atop the Cahuilla woman’s head in “Before the White Man Came — Palm Cañon” as a flat-topped basketry cap of coiled weave “worn by women to protect the head when carrying burdens suspended in a net on the back.” However, he documented only a few other clothing items:

Robes made of strips of rabbit-fur with cord twining were the only garment in common use, and they were draped about the shoulders only as protection from cold. ... Pad-like sandals of agave fiber were, and are, used when the feet must be protected from thorns.

He depicts typical Cahuilla houses with “four-forked corner posts of mesquite to [an] almost flat roof of mostly dry wormwood stalks,” and also notes the minimalism of the interior:

The occupants slept on the floor, and the furnishings were limited to cooking utensils and baskets.

He relates how the Cahuilla sourced and prepared their food, describing the implements and utensils: “bows, arrows, rabbit-sticks, fire-drills, flutes, mortars, cradle-boards, seed-beaters, and baskets ... fashioned of wood or woody materials.” The photographer goes on to liken Cahuilla pottery to that of other Southern California tribes: “The product of the potter’s art took the form of water jars, storage jars, pots for cooking, dishes for parching seeds and serving food, and tobacco pipes.” 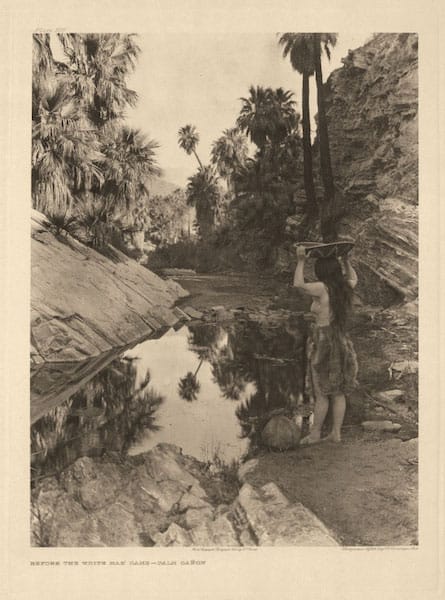 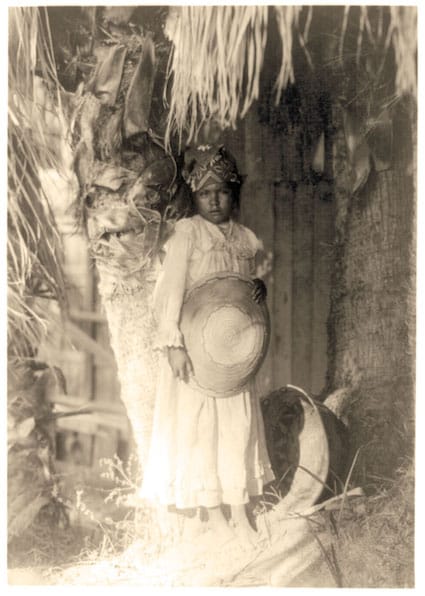 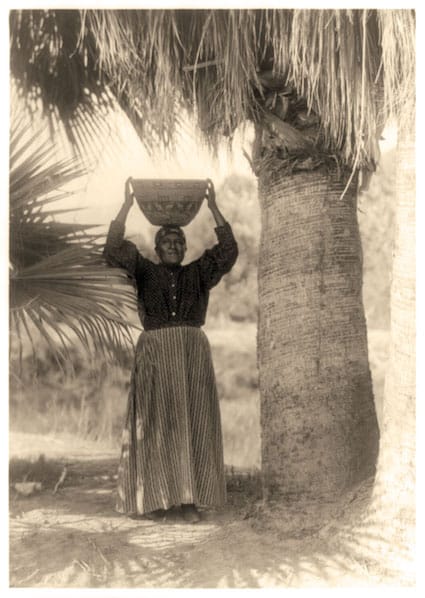 In addition to Cahuilla culture and daily practices, Curtis’ writings also describe the tribe’s traditions and rituals for birth, puberty, marriage, and death. Despite the scope of his study of Cahuilla life, however, he never determined the origin of the tribe’s name, theorizing that it “is probably the Spanish rendering of Kawika, westward (literally ‘mountain-ward’).” He writes:

It is easily conceivable that some Spaniard of long ago, traveling through the desert of Salton sink and making inquiry of the nature of the country and the people ahead of him, received Kawíka-wichum as the name of the westerly inhabitants and thereupon recorded the name Cahuilla.

Though the origin of the name remains somewhat of a mystery, there is no doubt that Curtis established his own name through his remarkable ability to capture and record a tribe’s very essence, a talent that became evident early on in his life.

Born in 1868 near Whitewater, Wisconsin, Curtis was 17 years old when he became an apprentice photographer in St. Paul, Minnesota, where his father had moved the family. He later became a partner in a photo studio after they moved near Seattle, Washington. He was 30 years old when he started The North American Indian — marked by his serendipitous meeting with lost scientists, including anthropologist and American Indian expert George Bird Grinnell, while taking photographs on Mt. Rainier. Curtis led them to safety, and Grinnell became his mentor, recommending Curtis for the Harriman Alaska Expedition, where Curtis, who had no academic credentials, developed his methodology for working with the other tribes.

Curtis went through great pains, financial and logistical, to reach so many tribes. He traveled on foot, horseback, and horse-drawn wagon over unpaved, largely unmarked paths. Championed by Teddy Roosevelt and backed for a period by J.P. Morgan, Curtis had the means to travel.

However, once he arrived at his destinations, his situation often became more daunting.

“Curtis often had to work harder to obtain his stories and photographs than merely talking to a few people, his solicitousness notwithstanding,” writes Barry Pritzker, author of the book Edward S. Curtis. “Once provisionally accepted, he was likely to have had to go through physical tests of worth, such as fasts and ‘super-sweats.’”

He overcame many obstacles, and hiried translators and assistants to help him interview and photograph the people. He was, in fact, obsessed with his work; it cost him his wife, his house, his studio back home, and ultimately his physical and mental health.

“One of the great paradoxes of Curtis’ work is that, while he may have admired some Indians personally, and some traditional Indian lifestyle in general, the profound effect his art had on solidifying the concept of the ‘noble savage’ in the American consciousness worked to the detriment of the Indians,” Pritzker suggests. “By portraying their cultures as static and unchanging, he played into the hands of deeply conservative policymakers who were all too happy to think of Indians as having existed in a happy past and who saw no place for them in 20th-century America.”

From an art perspective, Curtis was ahead of his time using different photographic processes. In addition to photogravures, he also made orotone, platinum, and silver gelatin prints. During his career, he created more than 40,000 negatives, most of which were lost or destroyed. 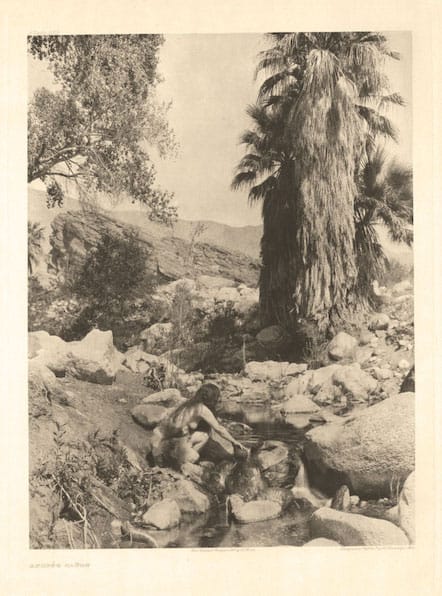 The Agua Caliente Cultural Museum, which opens next year in the tribe’s new cultural plaza in Palm Springs, owns four Curtis photographs and an unbound copy of The North American Indian, Volume 15, which covers tribes in Southern California.