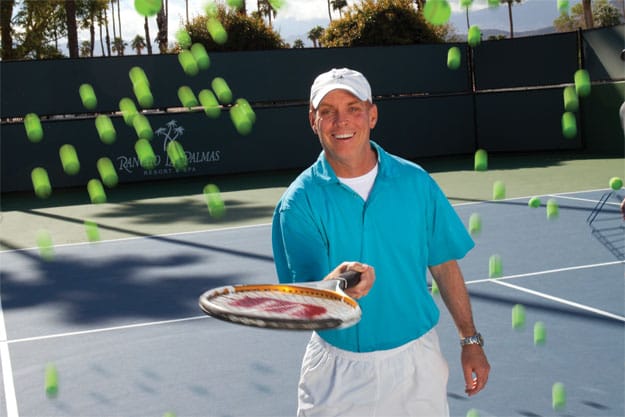 You can see on the surface — 25 immaculate U.S. Open-blue tennis courts — that Rancho Las Palmas Resort & Spa wants competitive players. The color of the courts asserts, “This is where the pros play. … Only the Australian Open still plays on green,” says Kevin Connolly, director of tennis at Rancho Las Palmas, where about 250 members mix with resort guests. It’s a rewarding dynamic for Connolly, a Pittsburgh native who not only coaches players, but also teaches coaches how to run a tennis club for his employer, Peter Burwash International, which named him professional of the year in 2010.

What distinguishes Rancho Las Palmas?
The neatest thing is the variety of players: resort guests, members, juniors, and pros. Members want good games, and the resort offers a whole other avenue to draw from. Our niche is junior tournaments. This was our sixth year hosting the Easter Bowl, the premier juniors tournament in the United States, with 640 players. Rancho Las Palmas has also been one of Tennis Magazine’s top 50 tennis resorts since 2008. And we’re the host facility for the Tennis Channel during the BNP Paribas Open.

Does the property host professional tournaments, too?
Yes, we hosted a women’s ITF event in February that mixed emerging and veteran players from around the world. We had 96 players, and it was part of the pro tour.

How do you pair resort guests with local players you know well?
We get as much background as possible from the guests. We ask a lot of questions and watch them play in a lesson situation or when they’re playing with a spouse or friend.

What are some of your best moments at Rancho Las Palmas?
It always comes back to the kids. We’ve worked with high school kids who excelled in state championships. In 2001, I coached a Chinese girl, Peng Shuai, who went unseeded into ITF semifinals in Montreal. I scouted the players she was going to play and then evaluated their game. Then on the practice court, I would simulate her opponent’s strokes, so she would be used to their style of play. I pushed her hard in practice. It’s still a rush getting onto the court, hitting balls, and helping people improve their game.