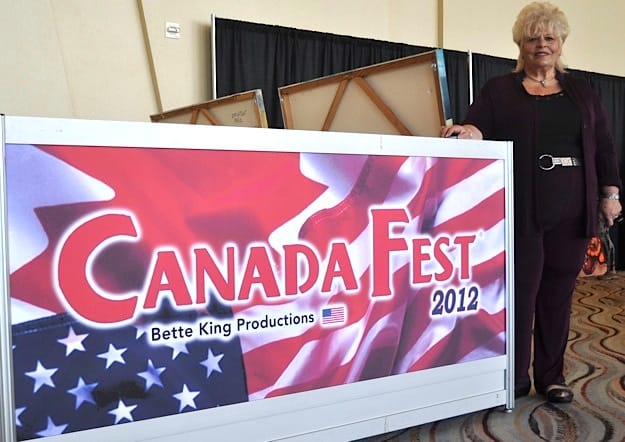 This weekend’s Canada Fest is going to be big, boisterous and unique, and Bette King wouldn’t have it any other way.

“My signature style is over the top and too much, but the bottom line is that’s what makes me different," said a laughing Bette, whose Bette King Productions in staging the two-day event at the Palm Springs Convention Center, 10 a.m. to 6 p.m. each day.

King will transform the once familiar convention space into something like a bustling city full of streets that will divide more than 300 different vendors into designated districts such as food, fashion, pet, products, crafts, services and more.

“To me, it’s like Barnum and Bailey’s Greatest Show on Earth,” King said, “in that it has the best that Canada has to offer, along with many local vendors from the Coachella Valley.”

Best described as not just a festival but “an event extraordinaire,” in addition to the hundreds of vendors there will also be non-stop live entertainment, celebrity signings, cars shows, and raffles for prizes happening every 15 minutes.

King’s background in event production is routed with an education and career in interior design that eventually branched out into producing events for charities after making many contacts with artists and celebrities in the entertainment industry.

Her secret to booking such an elaborate festival is having a good reputation and knowing what she wants.

“I don’t take “no” for an answer,” explained King. “My motto is when one door closes, a bunch more open.”

King was inspired to produce Canada Fest after realizing there wasn’t a single festival in the Coachella Valley that celebrated Canadian culture. She decided to take it upon herself to fill the void. What she found is not only did hundreds of doors open, but many people even came knocking at hers to be part of it.

“I feel very blessed to have the opportunity of people directly contacting me to be apart of what I’m doing,” said King.

She hopes Canada Fest will be a vehicle for Americans to learn more about Canadians and visa versa by creating a platform that encourages interaction.

Although this will be the first Canada Fest that King will organize, it won’t be her last. There are already more than170 vendors signed up for next year.