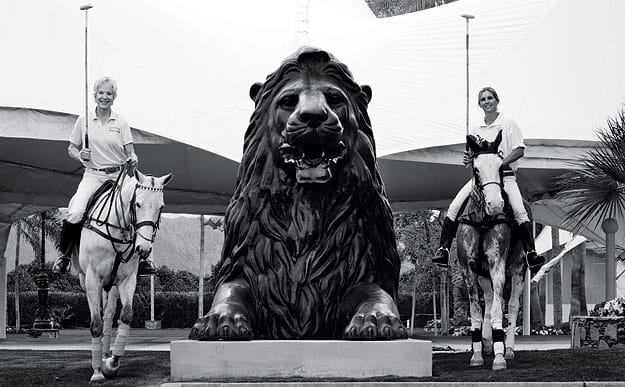 Blazing fire pits shoot sparks into the sky. Bursts of laughter punctuate a steady hum of conversation among cocktail-sipping revelers on the grassy grounds of Empire Polo Club in Indio. Across the lawn, blue lights illuminate a colossal white peaked tent. Under it, Roxy Keyfauver dances to the ’70s disco hit “We Want the Funk” and celebrates opening night of polo season with her friends.

Keyfauver’s enthusiasm surprises no one who has witnessed her tenacity and stamina on the polo field. “Roxy never says quit,” commentator Kevin Ittig says.

At 34, the La Quinta native and mother of three is one of the top professional female polo players in the nation. She fell in love with the game early on and joined the junior program at the club, borrowing a friend’s horse on weekends. The gate to her full-time polo career opened in 1995 while she was working as a horse trainer.

“I was able to take horses from being untouched and unbroken, never having a saddle or bridle, to playing high-goal polo,” she says. The United States Polo Association uses a system of handicaps, ranging from minus two goals to 10 goals. Fewer than 50 players have achieved a 10-goal rating since the rating system’s inception in 1890. Keyfauver is rated a one, but plays well above her handicap.

“There’s no better feeling than being one with the horse,” she continues. “When you have that communication, you are able to do all these extraordinary things on their backs. And it seems like the horse enjoys it. You feel like a complete team.”

The key to polo, she says, is to continually cultivate equestrian skills to outride the competition, find more opportunities to control the ball, make better plays, and know the horses. “You need to know when to back off. Like any athletes, they’ll get injured.” Because of the intense demand on a horse during a game, players replace polo ponies every chukker, or seven-minute period of play.

Keyfauver grooms her own horses. She’s up and out early every morning — cleaning, feeding, and exercising 10 horses; wrapping their legs to protect them during a match; and ensuring the integrity of tack and polo equipment.

More than a sport, polo — especially in the desert — is a lifestyle. People in the game have known each other’s families for generations, and on match day, the play on the field accounts for only a fraction of the fun. Keyfauver especially enjoys the game’s tightknit community. “Polo is a very family-oriented sport,” she says, adding that her oldest son plays junior polo. “Normally, you get generations playing together.”

Throughout the season, polo clubs host a variety of festive and sometimes offbeat gatherings. Earlier this year, Keyfauver won a greased-pig wrestling contest in Florida. At Empire Polo Club, grooms, players, and owners often congregate after matches in the club’s Tack Room Tavern for a celebratory drink.

The socializing makes up for long hours dedicated to their sport and their four-legged team members. But the work also pays off on the field.

Kim Kelly, a longtime pro on the polo circuit, knows this. She spends a lot of time with her horses. “When you train them, you get very involved with them,” she says. “They’re like children who need repetition and positive reinforcement.”

Kelly, a multiple MVP once named by Polo Magazine as Woman Player of the Year, prefers working with mares, which she says tend to be more aggressive and competitive. The action comes with plenty of risks. Last year, Kelly experienced her first on-field accident in a nearly two-decade career, shattering her ankle, shin, and calf bone. She was sidelined for more than 10 months.

However, in a sport dominated by men, Kelly, now in her 50s, has had tougher spells. She attended University of California, Davis, where she watched the men’s intercollegiate team practice and was sometimes asked to fill in for a chukker. The experience so inspired her that she and two other women organized a women’s indoor arena team. They played with the men’s team in scrimmages and went on to beat all the East Coast women’s teams. The UC Davis men’s and women’s team, both champions that year, rode in the Tournament of Roses Parade. Yet, despite the women’s victories, Kelly recalls male players at UC Davis telling her that no females would play professionally and “no one will watch you play.”

Their comments only spurred her on. “I had a goal. I wanted to be a women’s professional player,” says Kelly, who achieved a two handicap on the field and three handicap in the arena. “And if somebody tells me I can’t do it, it’s the impetus to make it happen.”

Similarly, Keyfauver notes differences in the way some male players treat their female counterparts. “I have met men that hit women harder [on the polo field] than other men,” she says. “But you can’t let that faze you, because this is a contact sport. Women don’t have the physical strength that men have, so we have to compensate by being better horsewomen.”

Kelly — who groomed horses in Santa Barbara and Palm Springs and was the on-site pro at Los Angeles Equestrian Center in Burbank — also encountered gender bias in the beginning of her professional career. “Those days, we women were fighting like hell to get our ratings up so they would look at us as serious competitors,” she says, adding that male attitudes have steadily improved over the years as more female players and owners enter the sport. Today, 23 of 90 Empire Polo Club members are female.

Regardless of sex, polo offers its players and owners a special lifestyle, full of exciting travel, charismatic personalities, and good spirit. “You travel; you’re treated very well; and you’re within a very connected, supportive community,” Kelly says. “Anywhere I’ve traveled, when I say ‘I play polo,’ I’m invited over for dinner.”

When Keyfauver isn’t grooming her horses, practicing, umpiring a match, running the indoor arena, or helping her mother run a junior polo program, she’s on the field, mallet in hand. “I play as much as I can,” the two-time MVP says, “because now is the time.”