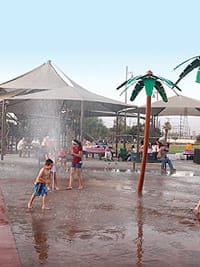 The list of assets is impressive. An 80 percent increase in population since 2000. Eighteen hundred acres of land zoned for clean industry in a tax-friendly enterprise zone. Easy access to freeways, rail lines, and a regional airport. A new college campus and a regional transit center. Clearly, Coachella is getting ready for a bright future.

Mayor Eduardo Garcia puts his vision for Coachella this way: “We recognize our role in the region. With space to grow and an investment in good planning, we intend to be ready for the next wave of economic expansion. We’re making great progress with both public improvement projects and with development partners who remain at the table, looking forward to gearing up in the near future.”

In fact, a quick tour of Coachella shows plenty of activity. Dillon Road has been widened between Interstate 10 and State Highway 86. Traffic is flowing freely along the elevated roadway over railroad tracks at Grapefruit Boulevard and Avenue 48. New signals and sidewalks are providing safe routes to schools. Gateway signs and landscaping welcome visitors along Harrison Street. Land is set aside for a 29-acre public park to serve the city’s booming northwest quadrant.

It’s all part of the big picture. While city staff continues to update the community’s General Plan for growth and put the finishing touches on a vision to transform the downtown corridor into a destination called Pueblo Viejo, regional economic development forces are helping to shape Coachella’s destiny.

As a stakeholder in the Coachella Valley Economic Partnership’s Economic Blueprint, Coachella is poised to attract businesses in the target areas of supply chain/logistics and green technologies. Says Mayor Garcia, “What these two industries have is well-paying jobs. What we have is a solid infrastructure for transportation and technology innovation. When you put the two together, you come out with a win-win situation for everyone.”

Indeed, Coachella has the goods when it comes to access to the global marketplace. The city sits at the hub of Interstate 10, State Highway 86, and a major rail-shipping line, putting it within easy reach of 25 million people from Los Angeles to Phoenix to Mexicali. With plans already in place to create a multimodal network, Coachella can serve coastal California ports that ship worldwide.

Most of the city lies within a state enterprise zone, and much of it is overlapped by an empowerment zone to boot. Those designations make doing business appealing even in a recession. At Rancho Coachella Business Park, road improvements continue to enhance access. A $20 million road grade separation project at Avenue 52 will be complete by mid-2013.

While the housing market is subdued, 11,000 lots in Coachella have been entitled. Officials predict that up to 500 new housing starts could be close to coming into the pipeline. KB Homes is still building in response to buyer interest in competitively priced new homes in their developments. Likewise, the Coachella Valley Housing Coalition is purchasing more than 100 lots in existing neighborhoods to allow families to apply their sweat equity and gain home ownership.

Coronel Enterprises is developing a multigenerational housing project targeted to low-income Hispanic families. Half of the 144 units will accommodate seniors, while the other half will be geared toward families. An 8,500-square-foot multipurpose building onsite will serve as a community center. The nonprofit partnership behind the project hopes to make apartments available in 2011.

Three retail shopping center locations remain active with developers who say their progress has merely slowed, not stopped. Around City Hall, the Pueblo Viejo concept is taking shape with façade improvements, enhanced street lighting and benches, and the undergrounding of utilities. The goal is to create a walkable, mixed-use city center where people can meet, shop, and do business.

A transit center for public and charter buses, taxis, and other ground transportation carriers is planned to tie into the civic center and eventually to College of the Desert’s East Valley campus. The city is also conducting a railspur study to determine how a dedicated rail facility could best serve Coachella.

Even though it’s among the oldest incorporated cities in the valley, Coachella is a city of youth. The median age here is 26. More than 150 teams play league soccer at Bagdouma Park. Little League baseball, Pop Warner football, and Boys and Girls Club recreation programs keep parks all over the city busy.

With 16,000 acres of undeveloped land in its sphere of influence, Coachella was one of 14 places in California selected as a partner for the Ten-Year Strategic Initiative by The California Endowment. The program’s goal is to create healthy, balanced communities that maximize their own resources through public/private partnerships.

Mayor Garcia is eager to come to the table with proposals such as building new schools next to community parks, where entire families can benefit from recreation, and balancing Coachella’s close proximity to fresh food in the fields with its number of fast-food outlets. Local nonprofit groups like Hidden Harvest are part of the cooperative solution.

Coachella hosts an annual Developer Day during which commercial real estate representatives from outside the area can get a top-to-bottom tour of the city’s industrial sector, rail and airport access, housing, schools and parks, and shopping areas. They are also introduced to businesses that have already made the move to Coachella, such as Coca-Cola Bottling of Southern California and Fulton Distribution. Coca-Cola Bottling’s 60,000-square-foot distribution center, now under construction, is set to become the company’s first Leadership in Energy and Environmental Design (LEED) silver-certified facility in the United States. Ken Ramirez, San Diego market unit vice president, says, “We are proud that our new sales and distribution center will be the first to bring ‘green building’ principles to the city and that the Coca-Cola Bottling Company of Southern California is a part of Coachella’s long-term vision plan for future growth and development.”

Coachella’s blueprint for success is a combination of available land; exceptional access to transportation; financial incentives; and a young, flexible labor pool. The city’s own finance policies have been updated and are in line to anticipate future economic opportunities. The groundwork going on today paves the way to a prosperous tomorrow. For more information, visit www.coachella.org or call (760) 398-3502.