Coachella Valley: Relocation Here is a "Hot" Thing to Do 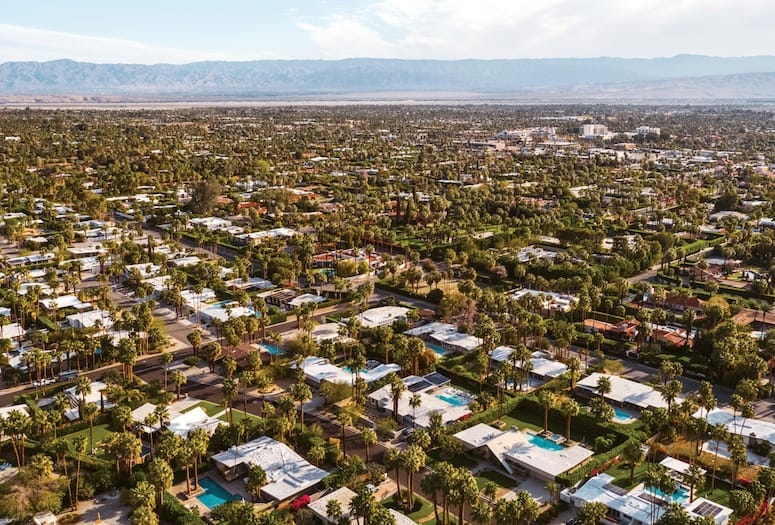 More than ever, people are discovering all that Greater Palm Springs has to offer.
PHOTOGRAPH BY LANCE GERBER

Futurist Alvin Toffler’s 1970 book Future Shock described an evolution to a transient society,” says Palm Desert resident Anna Miller, the visionary behind ValueRays Heated Computer Accessories. “It left quite an impression on me and actually molded my future.” Miller is referring to her relocation from the “rat race” of Los Angeles to the peace and tranquility of the Coachella Valley.

Inspired by Toffler, and with many thanks to advances in technology, the ingenious Miller — who has a master’s degree in business education and once worked as a Playboy Bunny in Lake Geneva, Wisconsin — has been happily self-employed and working from home in the field of ecommerce for more than two decades. In 2007, she left the hustle and bustle of L.A. and moved her home and business to the historic B Bar H Ranch outside Palm Springs. “I feel like I’m on vacation every day,” she says of her life now. “This area is a slice of heaven on earth: peaceful, tranquil, and with just the right amount of solitude to wake up every day feeling grateful and ready to take on whatever life offers. Plus, there is access to everything you need here, spiritually, physically, and intellectually.”

Miller is certainly not alone. More than ever, people are discovering all that Greater Palm Springs has to offer — its 360 days of sunshine per year, relaxing atmosphere, and natural beauty — and leaving larger, busier cities for this slice of heaven. People like Aaron and Becca Brukman. When the brother and sister team decided to start a business, they looked all over Southern California before deciding to relocate here from Long Beach. In December 2018, they opened Holey Scoops, an ice cream store in the Albertsons shopping center in Palm Desert. One of the things that drew them was the city’s family-friendly atmosphere and small-town vibe. “There’s a great sense of community here,” Becca says. “We’re from a pretty big area. Here, you see a lot of the same people, and everybody is really friendly. That’s been super, especially with an ice cream shop — it really goes along with our brand and the family-friendly experience we’re trying to sell.”

Aaron and Becca, both millennials in their 20s, have discovered that living in the desert has its advantages. “It’s definitely more affordable,” Becca says. As for the red tape of starting a business, Aaron says the city of Palm Desert made the whole thing surprisingly pain-free. “When we went in to get a business permit, there wasn’t a big line. It was all very easy to do.”

The Coachella Valley has a lot to entice to young entrepreneurs and job seekers. A 2018 study by the Greater Palm Springs Convention & Visitors Bureau of 1,000 people between the ages of 20 and 26 revealed that four out of five respondents would either move or consider moving to the desert if they found the right job here. Among those surveyed, the most sought-after job industries were agriculture, hospitality, and technology. And the primary motivators influencing the decision to relocate were salary and lower cost of living. 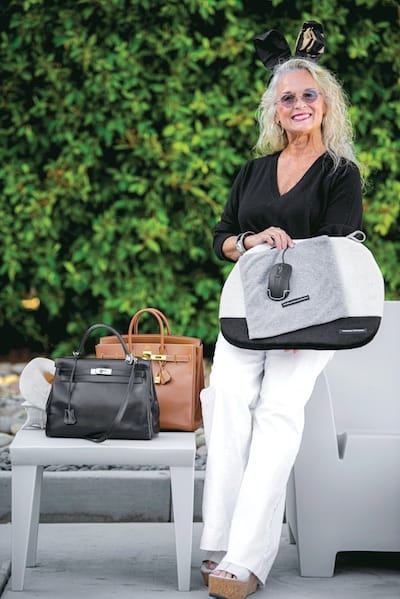 “This area is a slice of heaven on earth: peaceful, tranquil, and with just the right amount of solitude to wake up every day feeling grateful and ready to take on whatever life offers.”

For many, affordability is key. When compared to other California locales, the desert definitely offers more house for your buck. What you’d pay for a one-bedroom, one-bath 544-square-foot apartment in San Francisco can buy you a 1,285-square-foot house in Cathedral City with three bedrooms and two baths. And the price of a 913-square-foot-house in La Jolla can get you 2,400 square feet of prime real estate in Palm Desert.

Many Coachella Valley residents discover the area while on vacation and then fall in love with its relaxing feel and warm winters. In addition to being considered a destination of health and wellness for its bevy of outdoor activities, Greater Palm Springs is also known for its ease of navigation, its welcoming environment, and its LGBTQ- and pet-friendliness. Throw in plenty of world-renowned architecture, high-end shopping, golf courses, museums, casinos, spas, and one-of-a-kind events like Desert X, the Coachella Valley Music and Arts Festival, the Palm Springs International Film Festival, Modernism Week, and the BNP Paribas Open, and you’ve got an area that’s not only welcoming and affordable, it’s culturally rich. 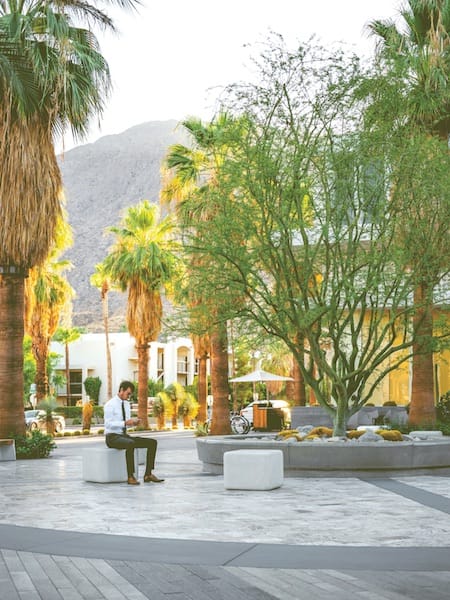 A 2018 study by the Greater Palm Springs Convention & Visitors Bureau of 1,000 people between the ages of 20 and 26 revealed that four out of five respondents would either move or consider moving to the desert if they found the right job here. 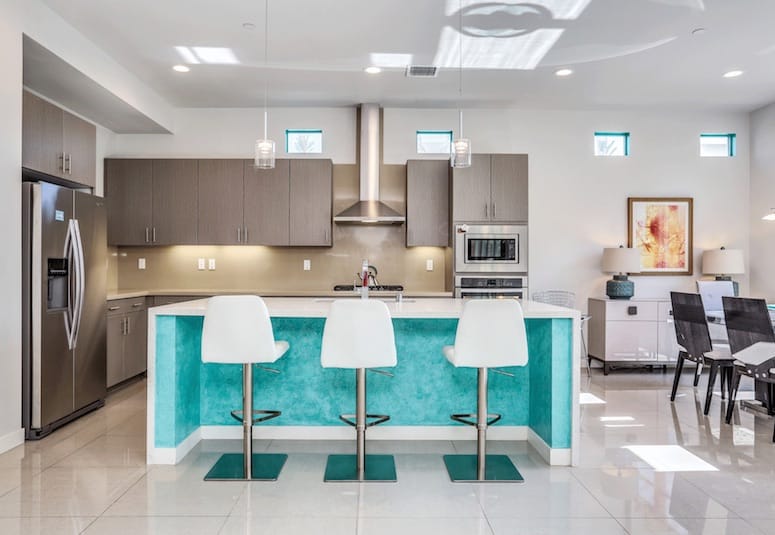 Stylish midcentury modern and contemporary homes have the feel of a resort.

All of this appealed to entrepreneur Liz Ostoich, who moved to the desert full time from Newport Beach with her husband, Mark, in 2012. The former land-use attorney chose to take time off when their last son went to college so she could attend football games and other activities, and when it was time to return to the workforce, she discovered she was craving something different, both professionally and environmentally. 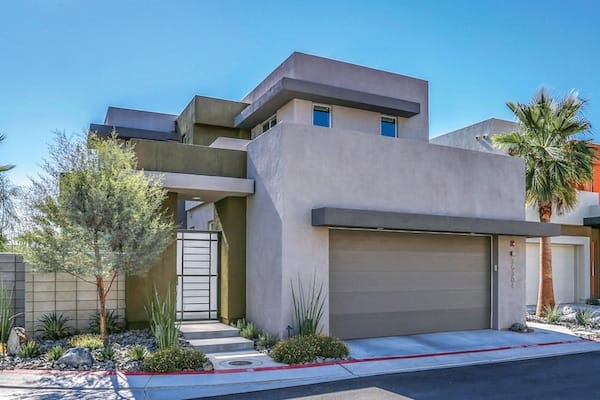 In other places, you find yourself there because of a job or to be close to family. But when you come to Palm Springs, you choose to be here.

“There’s so much about our community that I love,” Ostoich says. “I love the people. I love the fact that you can be anywhere you need to be in five minutes. We are an international city with small-town hospitality. The opportunities and experiences in Palm Springs are truly unmatched. And then there’s a really great, almost spiritual vibe. [When driving into town,] every time I hit 111, my shoulders would drop, and I would feel a sense of peace that I didn’t feel at the beach.”

“One day, I was sitting with a lady at a bar before I bought the first restaurant, and I said, ‘What is it about this place? Why are people are so much happier here?’ And I think she hit it on the head. She said, ‘People in Palm Springs are usually here for one of two reasons: Either they’re on vacation, so they’re happy. Or they’re on their second life.’ And I thought, that’s exactly what it is. In other places, you find yourself there because of a job or to be close to family. But when you come to Palm Springs, you choose to be here.” 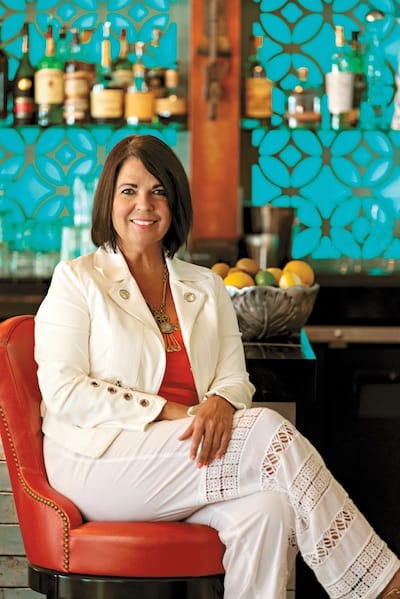 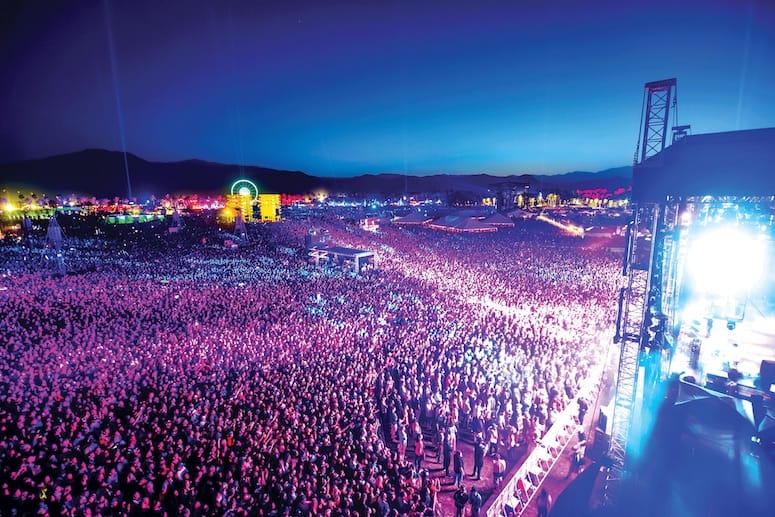