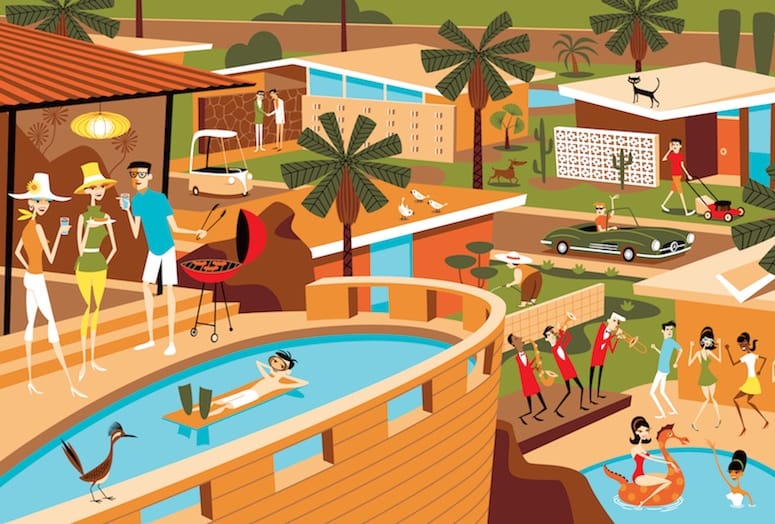 “The Leisure Principle” is just one of the silk screen prints you can find when The Shag Store has its re-grand opening Oct. 21 in Palm Springs.
RENDERINGS COURTESY OF JAY NAILOR

Fans of the brightly colored and amusing Jetsons-style artwork made by Shag (aka Josh Agle) have reason to celebrate.

The Shag Store, dedicated to Agle’s work, has expanded into a larger space in the Uptown Design District after an Aug. 2 fire destroyed more than $100,000 of art and supplies. A grand re-opening is planned Oct. 21 from 7 to 10 p.m..

Although the early morning blaze caused structural damage, store owner Jay Nailor said water from fighting the flames caused more substantial loss, although no original works were destroyed. “The fire hurt us, but we’re optimistic,” he said. “We were planning to expand anyway, before the fire happened.”

A rendering of how The Shag Store looks in its expanded space on North Palm Canyon.

The new store is in its original building at 745 N. Palm Canyon Drive and now has only one adjacent neighbor, Trio Restaurant, which also suffered loss in the fire and recently re-opened.

The moniker Shag is a mash-up of the artist’s name, fusing the last two letters in Josh with the first two of Agle — the word “shag,” as in shag carpet, Nailor said, perfectly fits Agle’s artist perspective and the overarching theme of midcentury modernism in his work. Agle works mostly in acrylic on boards and is known for his banners that line Palm Canyon Drive in the Uptown Design District.

Nailor refers to Agle’s style as a combination of James Bond and the cartoon series The Jetsons, which originally aired on TV in the 1960s. His store sells mostly architectural-themed prints, with serigraphs comprising the bulk of sales. Nailor has a second Shag Store in West Hollywood and also supplies Shag prints for an art store in Australia.

Agle will visit the Palm Springs location for a book- and print-signing Oct. 21. The artist owns a second home in Palm Springs, though he lives primarily in Orange County, and appears at four to six local events per year.

“Shag is very humble, considering the success he’s had,” Nailor said. “He does a lot of work for Disney. He redrew the Pink Panther for MGM. He’s done numerous band covers, and his art has often been used in Coachella Valley marketing campaigns.”

Nailor met Agle while serving on the Palm Springs Preservation Foundation board of directors and was impressed with his work. Eventually, this led to Nailor’s 2010 opening of the Palm Springs store dedicated to Shag art.

The Shag Store’s grand re-opening in Palm Springs will feature acoustic band Martini Kings and, according to Nailor, there will be an open bar and, possibly, hors d’oeuvres.