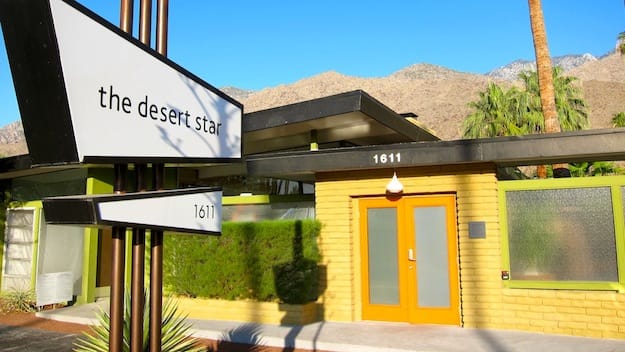 But it was the couple’s exposure to the architectural style while vacationing in Palm Springs that started the love affair.

“Friends of ours were staying at the Tony Curtis Estate, and it was like the opposite of the house we had at the time in Minneapolis,” Richard Hovel explained. “Ours was dark, lots of molding, small windows, and then we come to Palm Springs and everything is open.”

Two years ago, the Hovels moved permanently to Palm Springs, settling in at The Desert Star, 1611 Calle Palo Fiero just off East Pal Canyon Drive. Originally designed by Howard Lapham and built in 1956 as an apartment hotel, the structure has morphed into a condo association. Lapham is better known for his work on the Manzanita House in Deepwell, the Rockstrom Building in Palm Springs, the Chi Chi Nightclub and the Mayan-themed Cook House built in 1970 atop Thunderbird Heights.

On one of their visits to the desert, the Hovels bought a unit at The Desert Star, then wound up purchasing two more units when they made their full move two years ago.

“So now we have a four-bedroom house with two of them by the pool,” Richard Hovel said.

Their two-bedroom living quarters once housed the hotel’s office, and they have completely remodeled it in a mid-century motif, as is each of the units. Five of the seven units are available as vacation rentals when the owners are not occupying them.

“We get fans of mid-century architecture,” Richard said. “It’s a very quiet place.  Mostly we get people who want to relax.”

Thursday (Feb. 21), the couple will use The Desert Star as a backdrop for a Mod Populi event, a pop-up shop and sale for Modernist fans. The event, set to run 5-7:30 p.m., is not sanctioned by Modernism Week but is a combined creative effort of the Hovels and their friends.

There will be a Modernism Week poster for sale; their friend, Kurt Cyr, who sells mid-century products; hand-painted shirts; architectural designer Ryan Tharp, who makes his own furniture, and a collector of mid-century artwork will have pieces for sale. Wine will be served.

"We have this group of creative people who get together every month and talk about different topics,” Richard said. “We thought this would be a fun idea to do.”

Since moving permanently to Palm Springs, the couple have hired a manager to oversee the day-to-day operations of the condos so they can devote their time to their real job in store design, branding and trend work. Richard expects to have a new roof put on the building this summer, just some of the improvements that are part of trying to maintain the mid-century feel with a touch of today’s materials and technology.

“There is always that line you walk when you have a property like this,” Richard said. “The real fun for us is when we do have friends come, you have two rooms totally detached units so that window of time having friends stay with you goes from three days to five!”