The lobby of the Creekstone Inn in Idyllwild retains a stone fireplace that has been popular with visitors.
PHOTOGRAPHS COURTESY CREEKSTONE INN

As some out-of-towners become full-time residents in their second homes in the desert, Idyllwild has become an increasingly popular day trip, according to Palm Springs designers Howard Hawkes and Kevin Kemper of H3K Design. The duo’s revamp of an iconic lodge on the "Hill," Creekstone Inn, is designed to entice visitors to stay a few days in a “hip” new place, envisioned by a San Francisco couple known for their desert projects.

Amy and Tim Brinkman, who renovated The Twist and The Float and are working on Limón in Palm Springs, bought Creekstone in 2020. They had already purchased the adjacent Grand Lodge in 2016. Amy says the couple fell in love with Idyllwild, the people and the Lodge when they were invited up the Hill in 2015 by a realtor. Tim first visited Idyllwild at age 7 for its Christmas tree lighting with his parents. 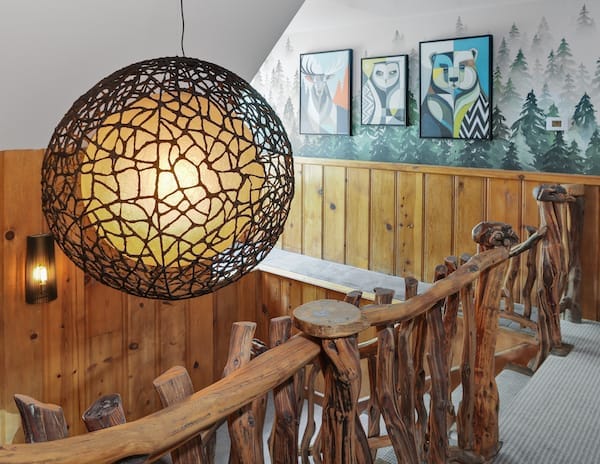 The upper staircase of the Creekstone Inn.

“The Creekstone had several things that made it a great fit for us to pursue,” Amy adds. “The inn is the epitome of charming, and we have kept the original bones and stone work. It has been a part of the town's history, starting out as a grocery store.  Imagine a market being built today with a huge stone fireplace; it is absolutely fantastic!”

Working with the Brinkmans, Kemper says he and Hawkes “didn’t want to create a baby Grand (Lodge). We didn’t want to compete with it or duplicate it.”

The Creekstone was originally used as a general store, when it was built in 1947, and later became the backdrop for the Elvis movie Kid Galahad (1961) and then as a venue for film festival nightlife, screenwriting workshops, and more. However, in spite of the building’s "charm," the designers say it was "a bit tired."

Most of the Brinkmans’ work has been in Northern California but now they are focusing on the desert, Idyllwlld, and Joshua Tree. While the Creekstone has seen many hikers stop over for a night, Amy says they are creating a “rustic, modern boutique hotel where city dwellers come to escape.”

Targeting an affluent, artistic set, ages 30 to 50, the owners say their renovations will set a “new standard for Idyllwild lodging“ among people they hope will stay a few nights. They’re offering “carefree comfort” in “luxurious linens,” and “playful” times among “cheeky art.” 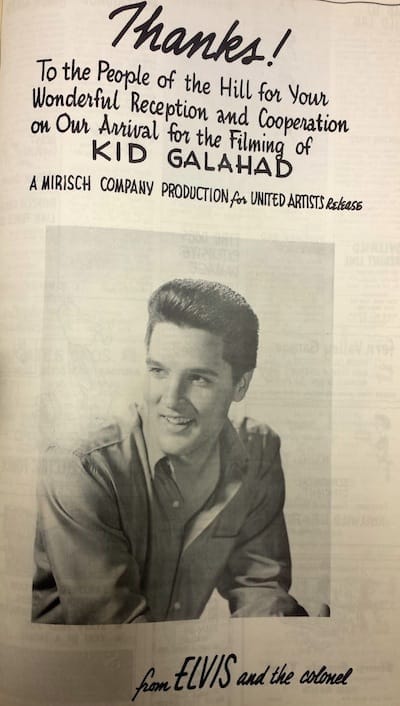 Elvis thanked Idyllwild with a notice in the Idyllwild Town Crier. Used by permission.
Hawkes says, “The idea was to take it up a notch and do something hip.” New touches include splashes of red and “clean lines appreciated by Palm Springs residents,” according to the designers. But, they didn't want to carry over all of their “bright Palm Springs palette.” They used red to accent the front door, shutters, and rocking chairs, to “add a touch of sophistication.” Red represents heat, fire, and flame, they say, which foretells the upcoming high-end steakhouse, named The Red Door at the Creekstone, which the renovation team hopes will be a hub when it opens in the spring. 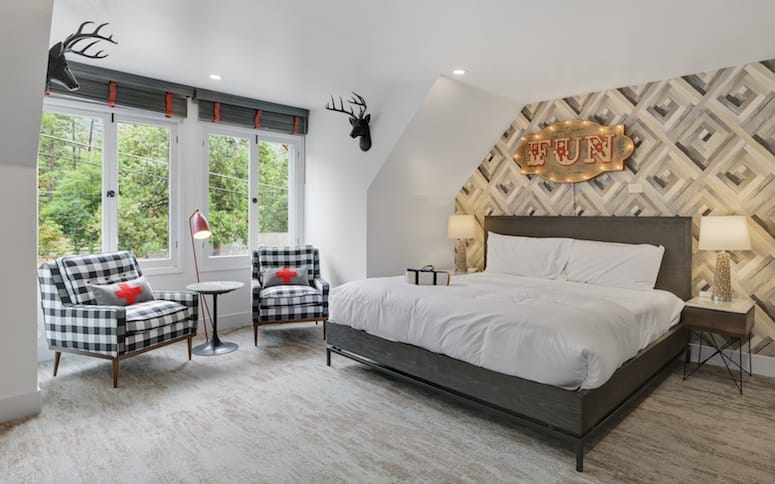 A guest room at the Creekstone Inn.

Guests will see stunning tile treatments, copper elements, firepits and new paving stones. This pizazz aligns with recent changes observed in hotels across America, according to "20 Design Trends to Watch in 2021" in the industry magazine Hotel Management, which calls these alterations "the wow factor” and states the possible benefits: “An impressive display will create a memorable moment, launching endless photo opps, hashtags and social media posts." Another trend, they say, is "sparking joy and exuberance." 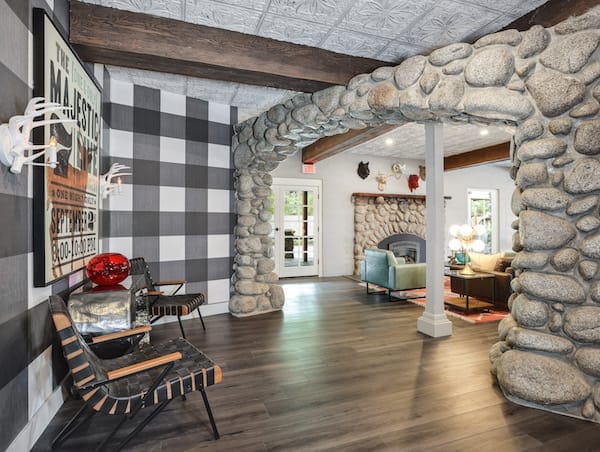 A stone archway takes you into the lobby.

Creekstone certainly has that going on, with the "FUN" signs above the beds, plus expanded spaces, such as showers big enough for two. According to the magazine, "Color choice, space planning, furniture and lighting selection, art and accessory choices will create memorable guest takeaways.”

Among new artwork at Creekstone are ceramic statues by Brian Hicks, plus abstract expressionist forest renditions by Brett Palazzo. Both men are from Palm Springs.

Some things haven’t changed at the Creekstone. The lobby’s huge stone fireplace remains — a much-loved spot by visitors through the decades. Live music will continue and cocktails will still be poured.