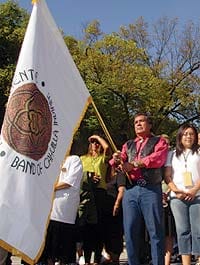 When the Smithsonian’s National Museum of the American Indian opened Sept. 21 in Washington, D.C., Benjamin Forgey, writing for The Washington Post, called the structure “scintillating when seen from afar, like some natural wonder you might see in New Mexico.”

The structural elements feature yellow Kasota limestone with no 90-degree angles competing with the neoclassical style of the Capitol, says Richard Milanovich, the tribal chairman of Palm Springs’ Agua Caliente Band of Cahuilla Indians, who marched with 20 tribe members in the opening procession.

“It was nice to participate in a historic moment in time for Indian people,” Milanovich says. “There was this high intensity of ownership, self-esteem, and self-regard for Indian people across the country.”

The museum shows modern and ancient American Indian art, and uses its more than four acres for the Native Landscape, an area that celebrates four habitats: forests, wetlands, meadows, and agriculture.

“It doesn’t show artifacts per se,” Milanovich says. “You are going to see a film of Indian people from the tip of South America to Alaska and how they live in today’s world.

“We are still a living and vibrant people, and we’re not going to be pieces placed on shelves so people can think, ‘Oh, those poor people,’” he continues.

American Indian museums also help many tribes that face conflicts over their heritage and identity, Milanovich says. “We had our cultural identity interrupted in the 1950s, and it’s slowly coming back,” he says. “Our own museum, the Agua Caliente Cultural Museum, is making that happen.”