Palm Springs Theaters - When the sun sets, stages across the Coachella Valley light up. 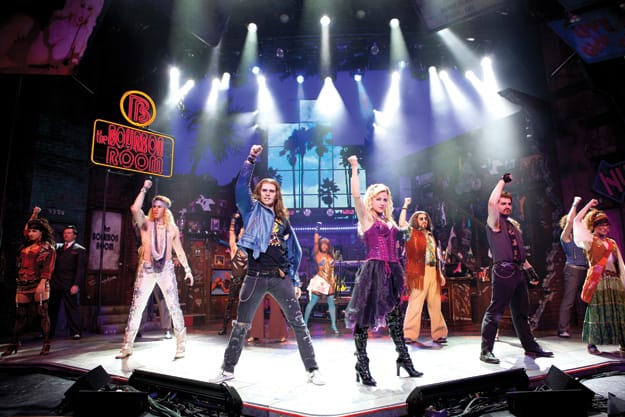 When the sun sets, stages across the Coachella Valley light up. This season’s diverse theatrical fare includes award-winning Broadway stars, a chance to time travel musically from the ’40s to the ’80s, a tone-deaf singing socialite, two sets of irate parents, and a little dog, too.

McCallum Theatre
The McCallum in Palm Desert opens its Broadway season Nov. 23 with the musical Rock of Ages. “With songs by Journey, REO Speedwagon, Pat Benatar, and more, anyone who loves the ’80s will love Rock of Ages,” says McCallum President Mitchell Gershenfeld. The show runs Nov. 23-25 with evening and matinee performances.

For a more scaled-down treat, humorist and satirist David Sedaris shares his thoughts on the human condition Nov. 26.

Anyone who has ever attended a chaotic family holiday function will enjoy the all-new My Mother’s Italian, My Father’s Jewish, and I’m Home for the Holidays Dec. 1 -2. “Steve Solomon delivers a very honest and very funny portrait of his family’s holiday gatherings,” Gershenfeld says. 760-340-2787; www.mccallumtheatre.com

Annenberg Theater
On Nov. 1, 3, and 4, Annenberg Theater offers God of Carnage, a dark but hilarious Broadway play about New York parents who meet after their children get into a fight.

Souvenir: A Fantasia on the Life of Florence Foster Jenkins, a Coyote StageWorks production, is a comedic take on the real-life tone-deaf singing socialite who financed a sold-out (albeit painful to hear) show at Carnegie Hall in 1944. Performances run Nov. 23-25 and Nov. 29-Dec. 2.

Plaza Theatre
The renowned Fabulous Palm Springs Follies kicks off its season Nov. 1 with guest star Lorna Luft, who will appear through Dec. 31 in “Dance to the Music.” Featuring a “legendary line of long-legged lovelies,” the show presents music and dance of the ’40s, ’50s, ’60s, and ’70s, “all performed by a cast old enough to have lived it.” Evening and matinee shows are presented weekly. 760-327-0225; www.psfollies.com

Palm Canyon Theatre
As part of Palm Springs Pride, Palm Canyon Theatre will present the Broadway in Drag pageant on Nov. 2, in which, its website says, “a bevy of beautiful female impersonators vie for the crown,” in the evening gown, talent, and swimsuit categories.

The fantastical play Xanadu, based on the movie, will run Nov. 9-18 with evening and matinee shows. Family favorite The Wizard of Oz, Nov. 30-Dec. 16, tells the tale of Dorothy, her friends, and her dog Toto as they try to find their way home while dodging the wicked witch and her winged monkeys. 760-323-5123 or www.palmcanyontheatre.org

Indian Wells Theater
Joyce Bulifant and Roger Perry star in the musical Grand Ol’ Dame, Dec. 7-9 and 14-16, at Indian Wells Theater on the California State University, San Bernardino. Palm Desert campus. The play is a love story as told by a grandfather as he travels by train over the Christmas holiday with his daughter and grandchildren. Proceeds from the show benefit the autism center at CSUSB. 760-341-6909; pdc.csusb.edu