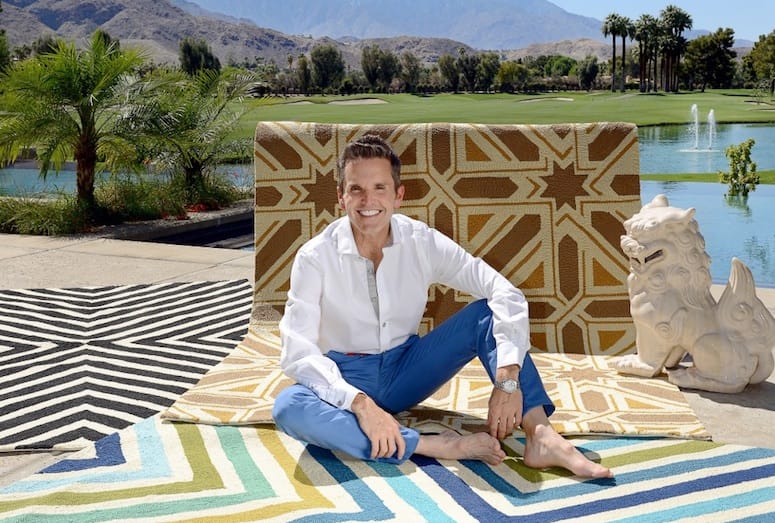 As an extra credit project his senior year in college, Dann Foley decided to start his own design firm.

Twenty-six years later, Foley's confidence in his decision to go out on his own remains steadfast. It's the same approach he applies to his designs, the way he works with clients and now extends to his foray into television.

The Palm Springs designer's presence on a national scale grew exponentially when he was picked as a contestant for NBC's American Dream Builders (see photo below). The reality-based show, which put 12 designers and home builders against each other in grueling redesigns and renovations, caps its first season with a two-hour finale May 25.

Foley, who was eliminated after episode seven, will host a finale viewing party May 25 open to the public at Smokin' Burgers & Lounge at the Smoketree Shopping Center in Palm Springs. Reservations are suggested. The evening will be equally dedicated to raising funds for the Palm Springs Animal Shelter through a raffle or donations.

Foley remains under contract with NBC for another year, during which time he could return to American Dream Builders next season as a judge if it's renewed, or possibly debut his own show.

"I get calls about shows a few times a year at least," Foley says. "I've had offers since we stopped filming in January. Getting that phone call doesn't mean anything, but it's a matter of whether the show is going to get picked up." One of the prizes you will raffle off at the final screening May 25 is a selection from the new Palm Springs Collection of rugs from Loloi. Why did you choose rugs?
"We had just launched our luxury outdoor furniture line, Skyline design. At the same time, I was already negotiating with Loloi. We decided to go with them because they had developed a whole new process of creating the yarns that are used for indoor/outdoor rugs. I absolutely wanted any rug license I signed to have an indoor/outdoor element because of our outdoor furniture."

What is special about these rugs?
"The color is going to last longer when they are outdoors, and its softer to the touch. Unlike the outdoor rugs of even five years ago, the hand and the plushes of these rugs is completely different. And the ability to sharpen the color and contrast between colors, that's what is exciting to me. What you don't see is the color fastness of this yarn."

Why name it after Palm Springs?
"The outdoor furniture is named after all of my favorite streets and spots in LA, so it was just a natural progression to call the rugs after Palm Springs. When anyone thinks of Palm Springs, what do they think of? I wanted to make sure there was something in the collection that says, 'Yes, that's Palm Springs to me'. Whether it was the black and white or multi-colored or desert colors, I wanted to make sure there was something there that someone would like."

You released close to 200 new products at the High Point Market in April. How do you decide what to put your name on?
"I'm not someone who just wanted to slap my name on a product. The difference between me and most of the licensed brands is I actually design my products. All of them. Every line, every category. I wanted them to be truly me, and part of what I do and what I love. So my relationship with my licensing partners is really meant to be a partnership and collaboration."

Did you always want to be a designer?
"My parents like to tell the story that they used to be afraid to go out for dinner because when they came home, I had all of the furniture rearranged. And it's true. Now I just do it professionally."

Between American Dream Builders, creating new products and running your business, your schedule must be crazy.
"I love it, I thrive on it. If I need time off, I just take it. I booked my first vacation in over a year just a couple of weeks ago. If I don't do it, I'll never go. I'm only taking a week. I would love to take a month."