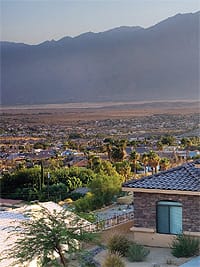 Ancient geothermal forces created a vast aquifer filled with rich mineral water naturally heated to 180 degrees 100 feet below the Earth’s surface. These springs that for centuries provided habitat to wildlife, sustained Native American peoples, and are believed to have curative powers, are also a vital component of Desert Hot Springs’ future.

This hot water haven overlooking the desert and mountains has long been a popular refuge for celebrities and sun-seekers from all over the world. Today, the health and wellness niche, one of the fastest-growing sectors of the hospitality industry, places a promising future before Desert Hot Springs.

To that end, Mayor Yvonne Parks has declared, “It’s a new day in Desert Hot Springs!”

Since the new City Council took office last November, the five-member team has been on a mission to bring positive energy to Desert Hot Springs with improvements that are planned, budgeted, and just beginning. Parks promises that the changes will be seen, heard, and felt over the next year and a half.

“Today I am excited about the changes you will see as the plans are set in motion,” she told a recent chamber of commerce gathering.

The City Council approved a $31 million bond early this year, the first step in realizing its vision for Desert Hot Springs’ renaissance. Four million dollars has been budgeted for downtown façade improvements, $10 million for street improvement and $17 million for property acquisitions for future developments.

Among the first priorities are street improvements. They include new and upgraded sidewalks at major intersections, elementary and high schools crossings, and along Pierson Boulevard, West Drive, Palm Drive, Two Bunch Palms and other high-traffic areas.

Perhaps most exciting of all is the Vortex Downtown Specific Plan.

Strategically located at the intersection of Pierson boulevard and Palm drive — the historic and geographic center of the city — Vortex is envisioned as a contemporary lifestyle center integrating living, working, shopping, recreational, and destination resort amenities. Visual elements include water features, native desert and mountain components, midcentury architecture and a natural color palette.

The goal is to seamlessly introduce a higher density mix of uses — a departure from the fragmented, low-scale developments that are now prevalent. Multipurpose open spaces will interconnect parks and recreation features, pedestrian and bicycle trails, landscaped parking courts, pedestrian plazas, and courtyards. Landscape, hardscape, lighting, way-finding, and a contemporary color palette are designed to create an inviting framework that links open space with commercial, retail, office and residential structures.

“Desert Hot Springs’ Vortex will be a downtown that will draw people from all over the Valley and provide a space for our residents to meet, shop, eat, and enjoy the natural beauty of this community,” Parks says.

The ambitious plan begins with the $31 million from the bond sale. A steering committee of business owners, residents, and property owners has already been hard at work to new bring retail, commercial, and residential projects to Desert Hot Springs.

Meanwhile, residents will see downtown building façade improvements, streetscapes, sidewalk improvements, landscape, new lighting and signage, and traffic circulation improvements over the next year and a half.

While Desert Hot Springs Redevelopment Agency has established Vortex to revitalize the downtown central business district, it is also annexing land north of Interstate 10 for future commercial and industrial development. Currently Palm Drive serves as the city’s main north-south entry from I-10, with prime land for mixed residential, resort, hospitality, and restaurant use.

Expansion is also planned for Pierson Boulevard, which is the city’s east-west artery from to Route 62 and toward Desert Hot Springs Civic Center.

A vibrant and growing community of 23,544 residents, Desert Hot Springs is projected to triple its population to more than 90,000 by 2035. New residential developments will include single-family homes, apartments, condominiums, and luxury gated communities built around golf courses.

The Desert Hot Springs Hotelier Association represents a coterie of intimate inns, boutique spas, and hotels, as well as to large resort properties with complete spa amenities. One of its most legendary inns, Two Bunch Palms, is set for renovation in the near future that includes expansion of the hotel and the addition of residential units and public access to hot-water pools and restaurants.

Desert Hot Springs Police and Fire departments will undergo several improvements this year. An expanded barracks and state-of-the-art exhaust extractor at the fire station will make room for more firefighters and provide a cleaner environment. Mayor Parks is leading the Citizen’s Emergency Preparedness Committee in tandem with the Fire Department to prepare residents for a catastrophic earthquake or other emergency.

With the addition of officers, the police station will undergo reconfiguration to increase work space, and one of the Tedesco Park buildings will become a Public Safety Center to house officers and staff for better access to citizens. The Desert Hot Springs Community Policing initiative, installation of community cameras, and mobile data computers in police cars all add up to more officers in the field with better response time.

Sunline Transit Agency has committed to new bus shelters and improvements for existing shelters and increasing the frequency of Line 14 on weekdays and weekends. New routes, including a community-based route, are projected for 2010.

Desert Hot Springs, founded by L.W. Coffee on July 12, 1941, and centered on the intersection of Palm Drive and Pierson Boulevard, was named in honor of the healing hot springs discovered by pioneer Cabot Yerxa.

Just as Yerxa was drawn to the site by its natural beauty and healing waters in 1913 and Coffee for a promising business venture, Desert Hot Springs is still growing.

It is emerging as a well-rounded community in which to raise a family or actively retire, as well as becoming a worldclass health and wellness destination.

Today, city officials, residents, and business owners are committed to managing the delicate balance of natural beauty and natural resources with a vision for quality development and lifestyle.