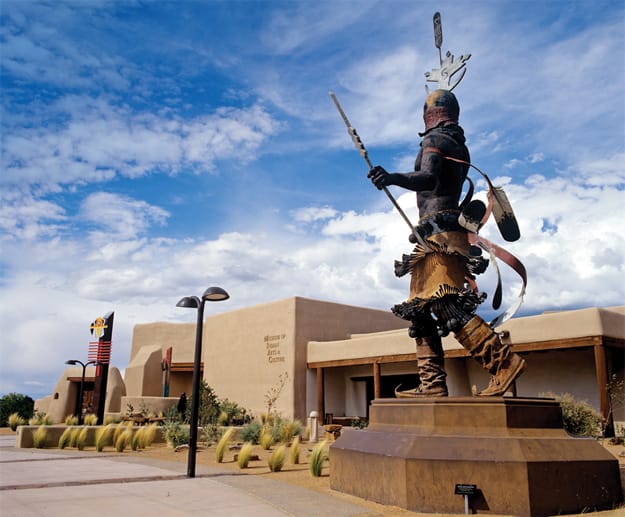 The site at the foothills of the Sangre de Cristo Mountains was once home to an Indian pueblo that had since been abandoned. Humble adobe buildings around a central plaza remains the city’s nucleus. One of those buildings, the Palace of the Governors, was capitol for Spanish, Mexican, and territorial U.S. governors. Gov. Lew Wallace penned his epic book Ben Hur while serving there.  Today, it is a museum exhibiting artifacts from the Spanish Colonial (1540-1821), Mexican (1821-1846), and U.S. territorial (1846-1912) periods. Outside, artisans of many Native tribes sell their jewelry and pottery. And the New Mexico History Museum has opened next to the Palace.

The Palace faces the famous Plaza, a gathering place for residents since humans arrived here. Grab a Frito pie or cup of coffee and find a bench under a shady tree to relax and people watch. The bandstand is active year-round, especially on summer nights.

At the nearby New Mexico Museum of Art, works by early Santa Fe masters underscore how the city gained its reputation as an artist haven and its ranking as the nation’s third-largest art market. In the 1920s, luminaries such as John Sloan, Andrew Dasburg, and Russell Cheney came to Santa Fe, drawn by its light and easy living. Georgia O’Keeffe is honored with her own museum (Georgia O’Keeffe Museum). On Museum Hill, the Museum of Indian Arts & Culture highlights contemporary Native American art, including works by R.C. Gorman. The Museum of International Folk Art celebrates folk art from around the world. One gallery showcases thousands of clay figurines depicting pueblo dances, Mexican Day of the Dead celebrations, and a scene of heaven and hell where even the devils look cheery.  The Wheelwright Museum of the American Indian and Museum of Spanish Colonial Art display art, artifacts, and furniture from New Mexico’s Native American and Spanish history.

From handmade Native American turquoise jewelry purchased directly from the artist to sculptures and paintings in galleries throughout the city, beauty abounds in Santa Fe.

Strolling down Canyon Road, you may feel as if you’re in a different city. Dappled sunlight plays on adobe walls in classic Santa Fe style, but mostly contemporary art beams from every surface. More than 100 galleries in a square mile make Canyon Road the largest concentration of galleries per mile in the world.

The new Railyard District, southwest of the plaza, is the hip, emerging destination

for art lovers. Modern warehouse-style galleries explore cutting-edge contemporary art, as well as the cafes, outdoor recreation stores, and more. The New Mexico Railrunner train station has made this area the hottest hub for shopping, eating, and strolling. The nearby Guadalupe District has a trendy Western twang and is popular for boutique shopping and bistro-style dining.

Santa Fe’s romantic restaurants garner international praise for their exciting blending of tastes from around the world. You frequently find New Mexico chile at the center of these creations.

Santa Fe would not be the city it is without its natural beauty.  At 7,000 feet, Santa Fe is cradled by aspen-covered mountains that offer a cool summer respite. Near the end of Canyon Road is the trailhead for the Dale Bale trail system, a favorite of hikers and birders. Winsor Trail has been called one of the best mountain biking trails in the nation. Anglers, rafters, and kayakers enjoy a watery playground on the nearby Río Grande.

For adventures of any flavor, Santa Fe delivers in a way only this relaxing, romantic city can.