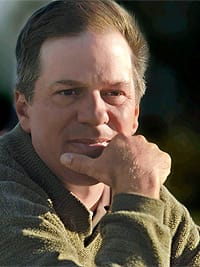 Tom Doak knows that more kids grow up hoping to be U.S. Open champion than designer of the next great golf course on which the tournament might be played. But he wasn’t one of them.

“I actually did grow up thinking I wanted to be a golf course designer,” Doak says. “I started playing golf at age 10 or 11 on public courses in Connecticut, but the best I got to be was a six handicap. I wasn’t going to make a living at it.”

After studying landscape architecture at Cornell University in Ithaca, N.Y., Doak spent a year caddying at St. Andrews in Scotland in an effort to learn the classic courses of Great Britain and Ireland. He then spent four years working for legendary golf course architect Pete Dye, whom Doak credits for much of what he knows about the business.

“My style is much different, but I only know how to do what I do because of Pete,” says Doak, who designed his first course at age 26 (High Pointe Golf Club in Williamsburg, Mich.). Twenty years later, Doak is one of the most sought-after golf course architects in the world, with gems such as Pacific Dunes (at Bandon Dunes Golf Resort) in Oregon and Stone Eagle Golf Club in Palm Desert on his résumé.

Doak took on Stone Eagle over several other opportunities. “It was on a spectacular piece of ground, but also an extremely rugged site,” he says of the course, which opened in March 2006. “[Developer Ted Lennon] and I shared the thought that it could be spectacular if you could pull it off, while respecting that it was not an easy job to do.”

Over 10 months of construction, Doak and his design team succeeded in creating another pearl. Stone Eagle overlooks Palm Desert from a mountaintop setting and even features a par-3 19th hole.

Your Web site says, “Dedicated to the rebirth of great golf architecture.” What do you mean by this?

When I was 20 and studying to be a golf course designer, you had to take it upon yourself to see good courses. I got around the United States and overseas to see some of the great golf courses, most of which are 75 years old and [were] built in an age when they didn’t use a bunch of heavy equipment to build them. They still stand up as great courses. Some people think that’s due to tradition, but I think they are more interesting because they still work around natural features. That’s kind of what we are still trying to do.

How much of a great golf course design must be there before you ever touch the land?

We do have the power to take a flat piece of ground or ground that is too rugged and make a course out of it. For instance, nobody in the 1920s would have tried to build a course on the Stone Eagle site. But even with all the money in the world, you can’t build natural features like ravines or rock pinnacles. A good piece of ground still gives you things to work with that you don’t have on a dead-flat piece of ground. For instance, Stone Eagle is a different setting than anything I’ve ever seen. Some Palm Springs courses are up against the mountains for a few holes. But at Stone Eagle, the whole course is; and there was no development to spoil it.

What challenges did you encounter at Stone Eagle that you might not encounter elsewhere?

It had a lot of natural features between holes; but in the fairways, it was rugged and we had to melt it down to make it playable. It was very complicated. At Pacific Dunes, a lot of the holes were just laying there. It was two orders of magnitude more to build Stone Eagle, where most people couldn’t have walked halfway across the site. It’s probably the most complicated job we’ve ever done, with much more equipment on site at any given time.

Does the land always dictate the design of the holes, or do you have holes in mind and then make the land work with those ideas?

I try to let that evolve out of what I see. With flat ground, you have to have ideas. It’s almost hard to get creative on flat ground. I’ve seen more than 1,000 courses around the world, and there are tons of things I’ve seen where I say, “If I see the right site for that hole, I’ll put it in.” Some pieces of ground are obviously a great site from the moment you step on them; some you feel like you have to sort out a puzzle. For me, because we’re small and do only three or four designs a year, we’re always weighing if it’s going to be fun so that we don’t miss out on the next one.

If you talk to a golf pro about what makes a good course, he will say that the worse you miss your tee shot, the harder your second shot should be. Well, the average player would quit. They’d always be missing the green on their second shot. I understand that thinking if you’re a Tour Pro, but it doesn’t make sense for golf course architecture in general. You have to give the average player a chance to be successful. Let’s say you build a typical straightaway par-4 and the golfer hits a mediocre tee shot and leaves himself 210 yards to the green. If you give him some room to knock it on, give him fairway in front of the green, eight times out of 10, he won’t hit the green because he’s not that good. But the other two times, if he hits a good shot, you want to let him hit it on the green.

What are you working on now, and what course designs are on the horizon?

We’re going to start building the fourth course at Bandon Dunes this winter, which is an honor. It’s great fun for us, and everything that’s been done there has turned out so well. It’s a little pressure, because we’re working next to maybe the best course we’ve ever done. But if I didn’t think we could do better, we wouldn’t be doing it. We just finished a project in Montana called Rock Creek, located on a huge 80,000-acre ranch. We are also working on a course up in Bend, Ore., and the client is a member at Stone Eagle named John Shaw.

You recently had a chance to design a course in Scotland. What was that like for you?

We just finished the Renaissance Club at Archerfield, a project next door to Muirfield; so it’s a tough neighborhood, but a nice one to be in. It was a thrill for me, and it’s great for the guys who work for me: They get the experience in Scotland like I did 20 years ago. Golf started there; and they have a different, healthier attitude to what golf is supposed to be. It’s not so much about money and belonging to a club. It’s a fun, natural outdoor pastime.