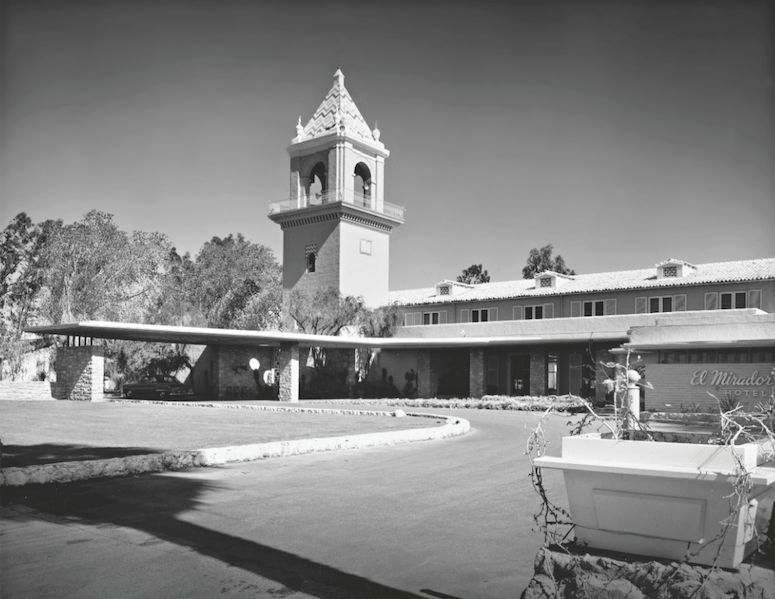 Palm Springs attracted many luminaries of Los Angeles architecture, but Paul Revere Williams is unique. As an African-American, he had built a successful career in an era when the profession marginalized minorities; he had emerged as a master of modern design despite being trained (and excelling) in the design of Tudor and Colonial mansions. Williams’ desert designs proved this mastery.

The Palm Springs Tennis Club (1947) was a tour de force of easy, elegant abstract volumes. Designed with his young colleague A. Quincy Jones, the club’s buildings are split and angled to allow flights of steps, inspired by the natural washes coming off the mountainside, to flow down to an oval-shaped pool over which preside twin palm trees. Williams’ approach to modernism was distinct from the slender, right-angled frameworks of architects Richard Neutra or William Cody. Williams composed rhomboid or curvilinear volumes almost like sculpture. Instead of using industrial materials, he employed natural wood, brick, and stone for their own rich beauty.

Williams and Jones expressed a similar jazzy vocabulary at the Town & Country Center (1948) the following year. This was both a building and an urban design: Drawing on the Spanish tradition, it created a pleasant courtyard down a narrow pedestrian lane just off Palm Springs’ chic shopping street. It is a sunny, flower-filled landscape surrounded by a restaurant, offices, and stores. A flight of floating steps, set at a jaunty angle, rises from a stepped terrace, inviting customers up to the restaurant. The steps are framed by a large cantilevered planter clad in horizontal wood siding, its greenery spilling over the sides to show off Palm Springs’ verdant vegetation. Paul R. Williams’ design for the Thunderbird Country Club home of Lucille Ball and Desi Arnaz (1954–55) in Rancho Mirage. Legend has it that Desi won the land in a poker game. Williams combined the elements of ranch houses with Desert Modern touches.

This shapely modernism is seen again in Williams’ strong 1952 additions to the Mediterranean-style 1928 El Mirador Hotel: a porte-cochère of wide stone pylons, its roof hovering on thin, extended columns; a circular outdoor lounge walled with irregular checkerboard screens supporting vines, with a retractable canvas canopy; and a pool with cabanas and a sleekly sculpted high dive backed by a parabolic arch holding up a sunbathing balcony.

That same year, Williams was called again to Palm Springs to design the interior of the Milton Kreis drugstore and coffee shop in the new Oasis Building. The store had been designed by the notable local architects Williams, Williams, and Williams. (Paul is not related to the Williams family of that firm. Although it played a vital role in the couple’s life, television got scant placement in their living room. Watching TV was not the main activity of Thunderbird residents, many of whom fled to the desert to avoid “the business.”

Paul Williams’ most thorough example of Desert Modern was the vacation home for Lucille Ball and Desi Arnaz in Thunderbird Country Club (1954–55). This was a long, low, rambling residence that mixed the comfortable informality of a ranch house with the contemporary stylishness expected of the reigning king and queen of that ultramodern medium, television.

Board-and-batten siding showed that it was a ranch; ornamental concrete block walls, the patterned grills flanking the front door, and the open carport displaying a glamorous car all mark it as modern. Inside, the open plan flows easily from living room out to the pool and patio through sliding glass doors. Paul R. Williams and A. Quincy Jones designed the Town & Country Center (1948) in Palm Springs, a mixture of retail and office space. It is considered one of the first “shopping malls.” The space features a floating staircase that originally led to the restaurant.

These varied designs for the wealthy at play show only a fraction of Williams’ talents, however; elsewhere he also designed affordable mass-produced housing for the average person. He was much more than an architect to the stars. He kept up with the times. That’s why modernism fit him so well.

This is the seventh of a nine-part series adapted from The Desert Modernists: The Architects Who Envisioned Midcentury Modern Palm Springs. The book, published by Modernism Week in partnership with Palm Springs Life, was released in February 2015 in correspondence with the 10th anniversary of Modernism Week. This chapter’s writer, Alan Hess, is an architect and historian who has written 19 books on modern architecture and urbanism in the mid-20th century.