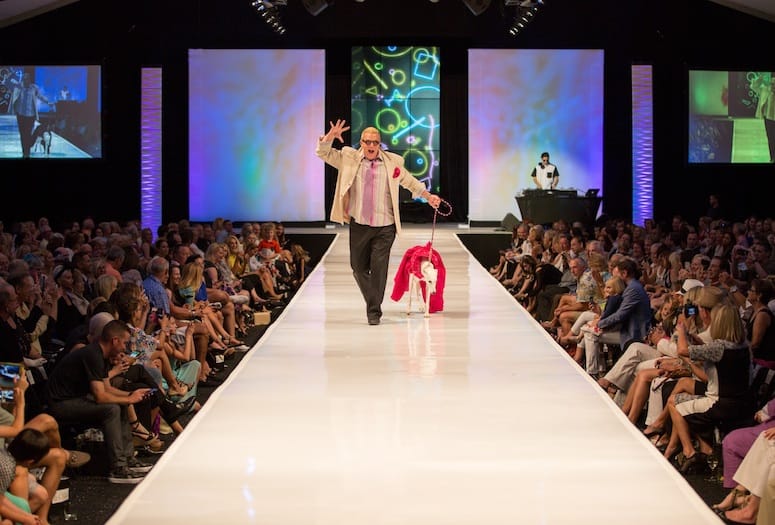 The theme of the fifth annual Le Chien fashion show presented by The Resort at Pelican Hill set the tone: I ♥ the ‘80s. And Fashion Week El Paseo ticketholders filled the big white tent decked in full regalia.

Floppy lace hair bows matched black fishnet fingerless gloves. Flashes of neon colors popped. Even patterned leggings paired with “Hot for Teacher” stiletto heels came back into style for one glittering night in Palm Desert. When Madonna and Freddie Mercury impersonators greeted guests at the door, they knew there were in the right place.

The ultimate accessory of the night, however, strutted on all fours at the end of a leash. Fashion Week’s runway show that benefits the Humane Society of the Desert has become a family-friendly event that includes loyal canine pets in the audience who support the fellow canines on stage.

For the last 55 years, the Humane Society has brought untold love into local households while helping give thousands of animals a second chance at life. The show not only celebrated the unpredictable and irresistible nature of our furry friends, it also let the audience relive the exuberant spirit of an unforgettable era when Michael Jackson was still among us and the mall played beloved hits from Casey Kasem’s countdown.

After a live auction that quickly raised more than $6,000 for the important work of the Humane Society, a familiar pair of white socks and black loafers made quick footwork on the runway. Opening to the first heart-thumping notes of Beat It, internationally recognized tribute artist Michael Kiss performed three flawless numbers (including Thriller and Billie Jean) with just as many costume changes. The moonwalks and toe stands weren’t lost on the constituent of young attendees. Kids who missed experiencing the flashy 1980s by several decades were as eager to capture the King of Pop and his perfected dance moves on their cellphones as their parents were.

Blondie’s 1980 hit Call Me rang in the two-part fashion show, which began with dog-loving Humane Society donors followed by professional models, all with animals in tow.

Eight generous patrons clearly enjoyed the chance to sashay down the runway with their good-natured pets. Following the stately gray poodle in a coiffed afro, the blue-eyed Australian shepherd in a black fedora, and a floppy eared pit bull walked by a young man in sunglasses with a few MJ moves of his own, the show hit a cellphone-photo high. Who could resist snapping a pic of the woman in leopard print, pearls, and tall pleather boots who walked her smiling black pig? (And don’t ask; of course pigs smile.) Proudly showing off her pet pig.

A parade of models wore their hair in braided crowns with loose, kinky waves. Simple but creative fashions mixed ‘80s’ combat boots and corset tops with current looks, moving the show through its second wave. To the time-warped music of Cyndi Lauper, Duran Duran, the Eurythmics, and Dire Straits, dogs of every size and cut went wagging, prancing, trotting (and sometimes slipping or being coaxed or carried) down the runway in canine costumery and couture designed by Patt Savastano. As owner of Spoiled Dog Designs in Palm Springs, Savastano walked the runway too, carrying two of her own Chihuahuas dressed as a bride and groom.

From the Dalmatian that matched its model’s polka-dot skirt to the Greyhound in a ball gown, the Husky in a boa, and the Great Dane in gold lamé and a feathered hat, the 1980s proved as memorable this time around — and left many hungry like a wolf for more. The runway is full for the finale walk. Patt Savastano of Spoiled Dog Designs in Palm Springs was the stylist for Le Chien.