Silent comedian Harold Lloyd’s Movie Colony home was a private and low-key retreat for his family and friends.
PHOTO BY MEGAN KEANE

The legendary film comedian Harold Lloyd was a busy man in Hollywood the first half of the 20th century, completing nearly 200 pictures between 1914 and 1947. Greenacres, his imperially grand 32,000-square-foot, 44-room Beverly Hills mansion set on 16 prime Benedict Canyon acres and now on the National Register, was his showplace.

When Lloyd wanted to get away from it all, however, he took himself to Palm Springs and the decidedly low-key and casual Spanish bungalow he had built for himself and his family in 1925.

Located in The Movie Colony on North Avenida Palmas, the unobtrusive one-story, L-shape house cast a small footprint on its expansive acre-plus property. “It wasn’t made to be fussy, it was cozy,” recalls Suzanne Lloyd, Harold’s granddaughter, who spent a good deal of her childhood there. “It was a family house, a place to go and hide out and have fun. He liked having land, he had neighbors he liked. It was a happy place and everyone enjoyed it.” 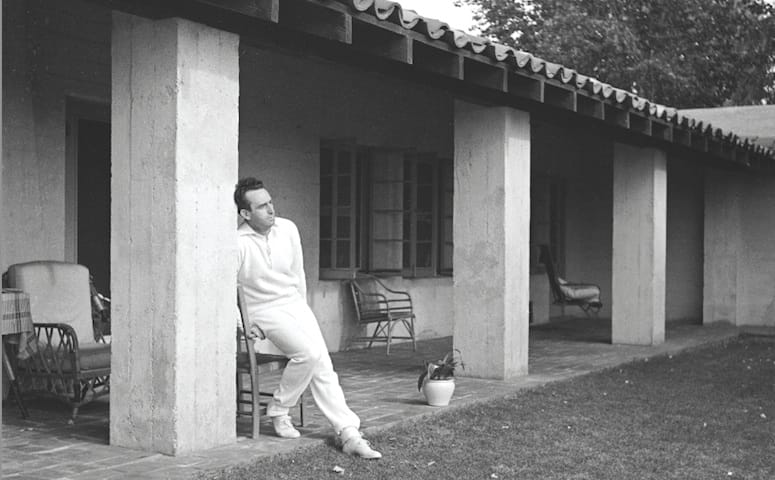 PHOTO ©2011 HAROLD LLOYD ENTERTAINMENT
Harold Lloyd relaxes at his Palm Springs home. “It was a family house, a place to go and hide out and have fun,” says Suzanne Lloyd, his granddaughter who spent a much of her childhood there.

That was then. Lloyd might not recognize his weekend getaway these days, which was recently on the market for $3.29 million. Since his death in 1971, a series of owners have added both square footage and formality. The original three bedrooms have swelled to five, with six full bathrooms, including an unusual master bedroom/his-and-her baths/office combination in place of the original kitchen, plus an underground 1,000-bottle wine cellar and tasting room. An additional two-bedroom, two-bath detached casita occupies part of the still-spacious yard. The estimated original 2,000-square-foot house — no one can find its plans — has swelled to 5,100 square feet.

The current owners, a Canadian businesswoman of Taiwanese heritage and her Swiss husband, who bought the house in 2004 and extensively remodeled it over a two-year period, enlisted the aid of a Taiwanese feng shui master to oversee the redesign. 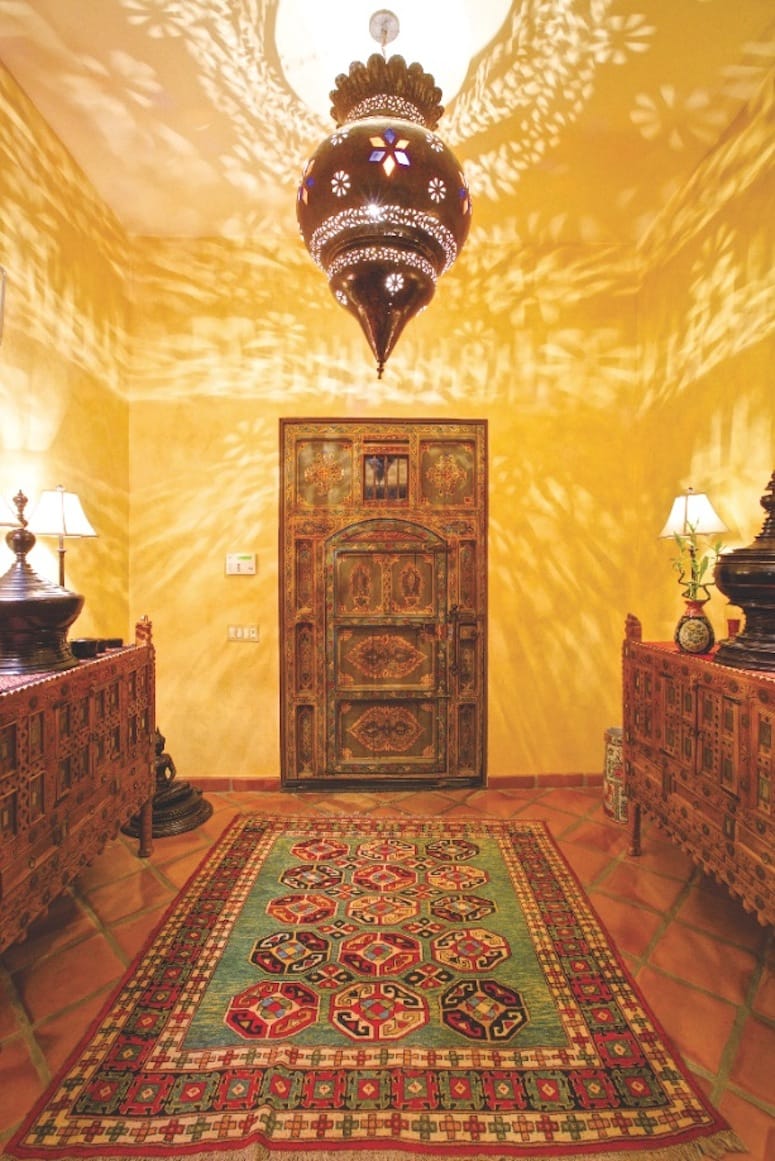 Feng shui, for the uninitiated, is an ancient Chinese system of designing human environments so that they harmonize with nature in a way that enhances a person’s “chi,” or life force. It affects not only the placement of furnishings within a space, but the structure itself, including entrance points and the location of certain rooms within the house.

The quirky intricacies of this ancient philosophy posed a considerable challenge to Palm Springs designer Steven Cheroske of Steven Cheroske Design when he was hired for the project by the Taipei-based couple. Cheroske, who specializes in retail design, had worked on a chain of Asian department stores owned by the couple and knew them well. More than 10 years ago, the couple were on a business trip to Palm Springs when Cheroske took them to see a “kind of Old World” interior he had designed in the Shadow Lake area of Indio. “They fell in love with it,” he says. “They got the bug and wanted to buy something.”

The Lloyd estate, which by that time was in need of serious refurbishing, was on the market. What appealed to them, Cheroske says, was the casita — perfect for her soon-to-be-married son — and “the space of it. She envisioned having a family compound there for the holidays.” 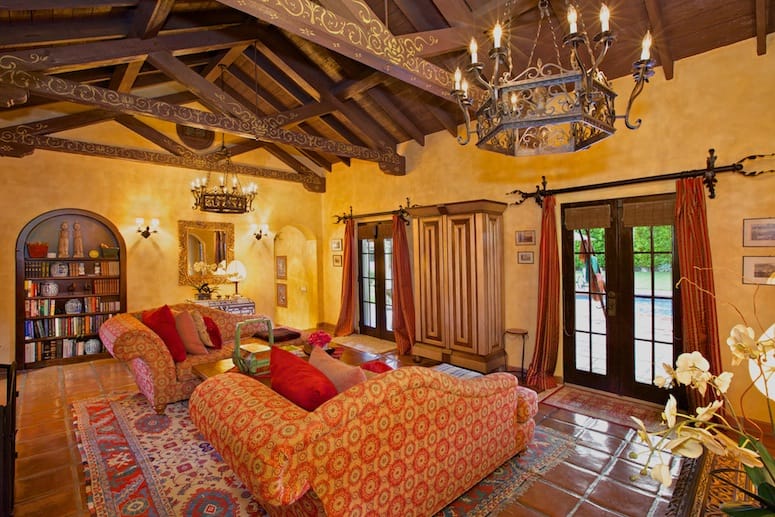 PHOTO BY MEGAN KEANE
The couple who bought the home liked an eclectic, ethnic, and Asian mix of furnishings.

Cheroske got busy on his design, which he delivered to them in Taipei. “When I got there,” he recalls, “she said, ‘I want to go to the feng shui master and look at the plans with him.’ I thought, ‘oh no, are we getting into this?’ My original design had a beautiful flow. When you throw in feng shui, it gets unusual.”

“There were a lot of challenges from a design standpoint,” Cheroske notes diplomatically. The house was taken down to the studs, a necessary move after all the years. Cheroske was loath to give up the turret, which he needed “for balance,” and used it to enclose the stairway to the wine cellar, creating another turret for the new entrance. He relocated the kitchen, dining, and master suite rooms as the master indicated. The wife preferred to leave sparsely furnished the large old dining room area, which sits past the new entry, for entertaining and dancing. 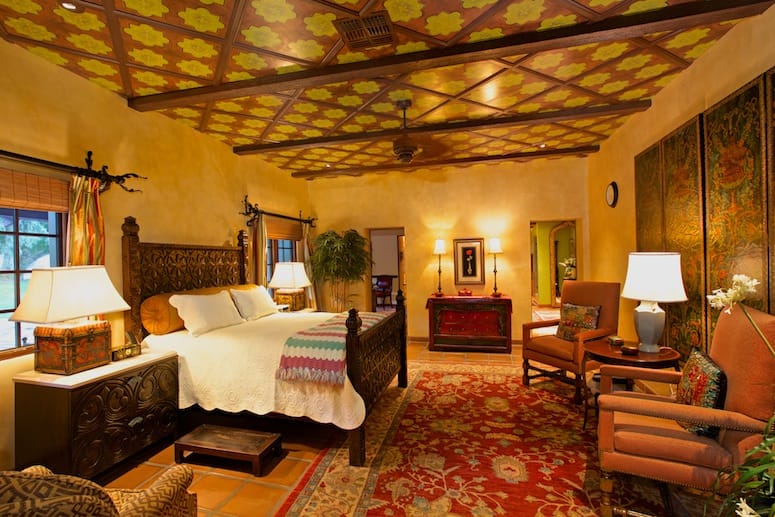 PHOTO BY MEGAN KEANE
Since Harold Lloyd’s death in 1971, the house went from three bedrooms to five.

Notably, the couple, who travel extensively, liked an eclectic, ethnic, and Asian mix of furnishings, and have decorated the house accordingly. “It’s a real mix,” Cheroske says — Balinese, Indian, Chinese, and Moroccan carved doors and cabinetry abound. Cheroske invested in deep color, including a warm gold, earthy terracotta and brilliant chartreuse, to complement the carved wood and richly hued couches.

Still, he says, the house “can easily be transformed to a more traditional Spanish,” befitting its 1925 roots. “It’s been maintained beautifully,” Cheroske notes. “It’s like putting more jewelry on somebody. You take it off, and it’s still what it is.” 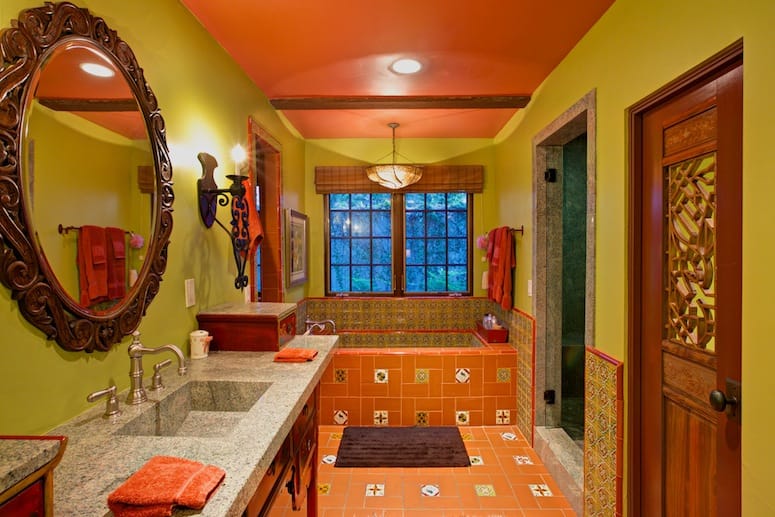 PHOTO BY MEGAN KEANE
The home has six full bathrooms. 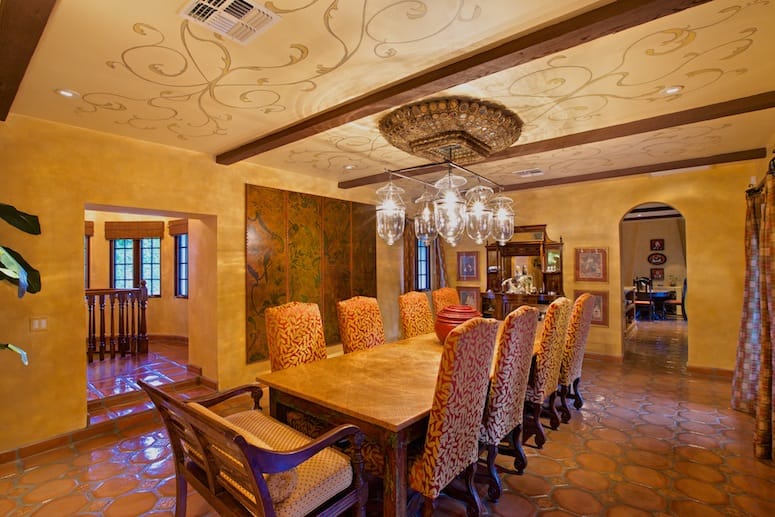 PHOTO BY MEGAN KEANE
The large old dining room area was saved for entertaining and dancing. 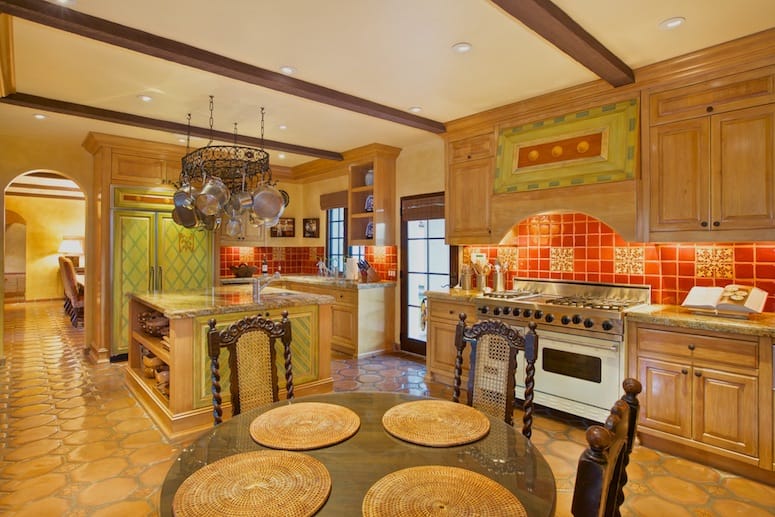 PHOTO BY MEGAN KEANE
The kitchen was moved to the opposite end of the house, formerly the site of the master suite. 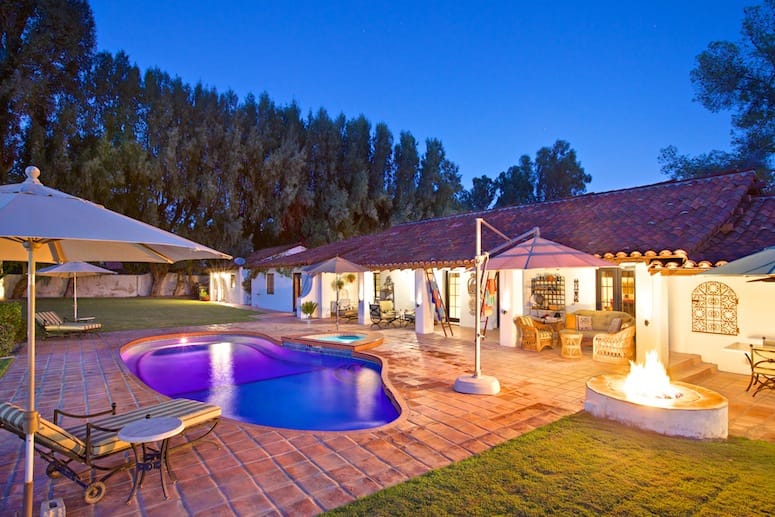 PHOTO BY MEGAN KEANE
The pool area of the former Harold Lloyd home. 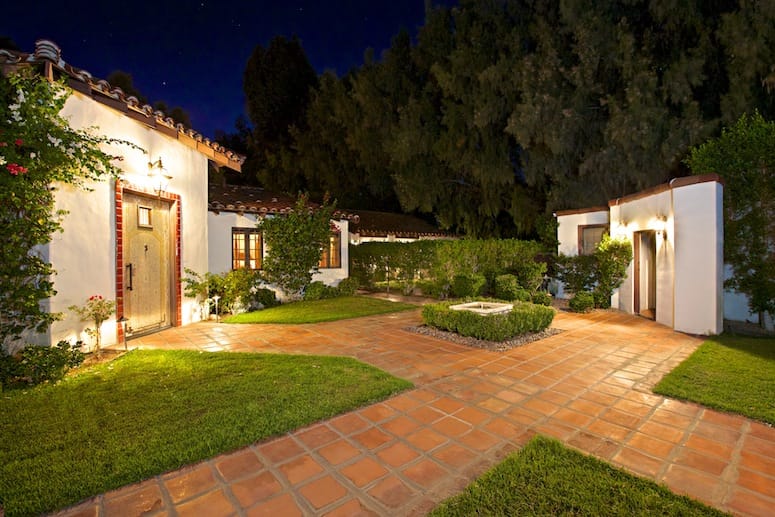 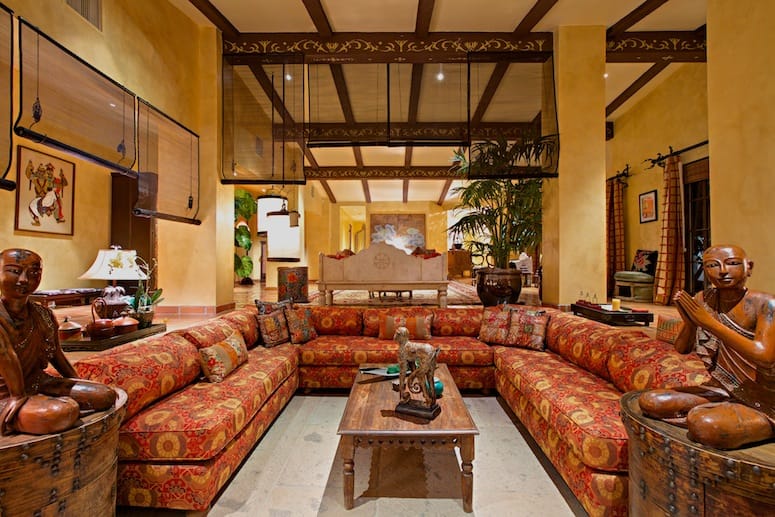 PHOTO BY MEGAN KEANE
The estimated original 2,000-square-foot house — no one can find its plans — has swelled to 5,100 square feet.