Deluca jewelers on Elpaseo in Palm Desert, The DeLucas opened their El Paseo location in 1994 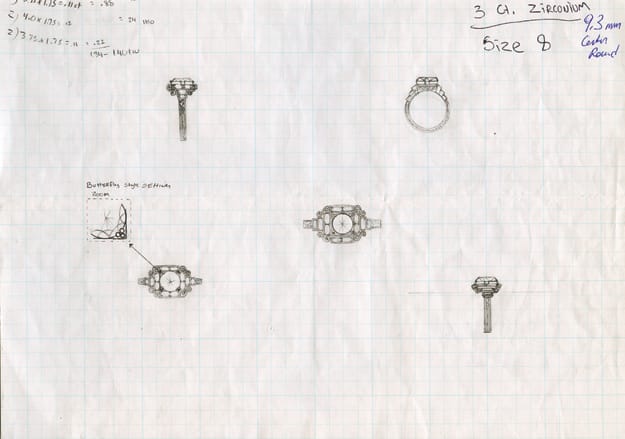 A distressed woman entered DeLuca Jewelers on El Paseo in Palm Desert. Her grandmother’s diamond ring had disappeared. She showed a photograph of the exquisite ring to the proprietor, Joe DeLuca, who often says his team specializes in “one-of-a-kind jewelry for one-of-a-kind people.”

DeLuca consulted with General Manager Fernando Olivares, who asked the customer about specific details of the ring. “Every detail reminded her of her grandmother,” Olivares, says. “The diagonal scrolls on the platinum setting, the older-style ‘butterfly’ prongs, and the 2-carat diamond centerpiece.”

Olivares began to sketch and eventually created an intricately drawn ring for the woman to examine. She was thrilled and asked him to cut out the paper ring. He taped it to her finger, and she wore it out of the store. With her blessing, the DeLuca team exacted the replica. “When she saw it,” DeLuca says, “she cried.”

The DeLuca family launched their first store on Crenshaw Boulevard in Los Angeles in 1947. Joe and Ann DeLuca met at the wartime Hollywood Palladium, and it was love at first dance. Ann insisted he buy her engagement ring from her jeweler uncle. Intrigued by the uncle’s business, Joe asked for a job while he studied under the G.I. bill at night.

The DeLucas opened their El Paseo location in 1994. Behind Joe’s desk hang celebrity portraits, including one of Frank Sinatra, who ordered a pinkie ring with his initials. The singer once commissioned an Italian charm for a godchild, sending his pilot from Las Vegas to collect it.

Though custom work is its forte, DeLuca Jewelers displays three cases of estate jewelry. They also boast a rare collection of Art Nouveau pieces, such as the Geisha pendant wrought by the venerable Barcelona house Masriera, the world’s oldest (since 1839) continuously operating creator of Art Nouveau jewelry. Masriera used the time-honored basse-taille technique on the Geisha to enamel glass onto its gold surface.

True to its Italian heritage, DeLuca Jewelers offers an enviable selection of classic, regal cameos, popular again, as styles return in cyclical fashion. A large, 1.7-carat diamond brooch (shown) picturing a mother and daughter shows the ancient art of carving raised figures or scenery. The DeLuca design was carved in relief on a traditional conch shell by the sound-alike Di Luca Brothers of Naples.

One of DeLuca’s favorite rings features a perfect, 9.3-carat sapphire cornered by four small diamonds. Appraised at $64,000 but offered for much less, it shimmers with a row of princess-cut sapphires totaling 2.4 carats, surrounded by diamonds (1.47 carats) and set in platinum and 18K gold.