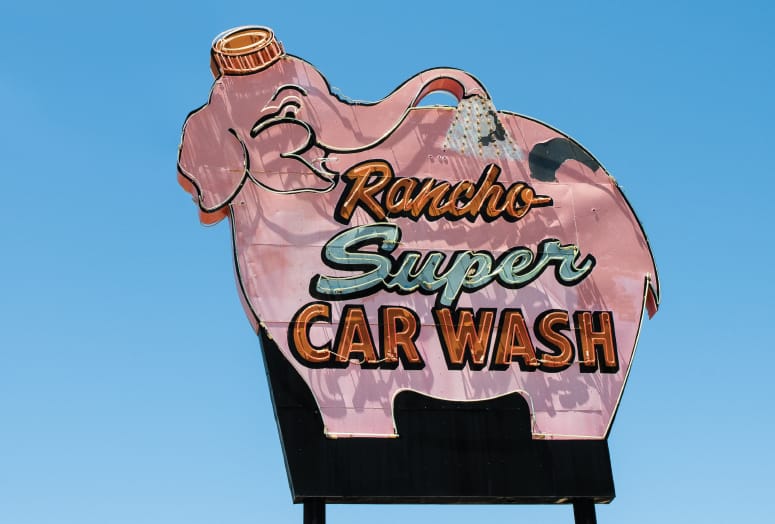 The "Elephant Car Wash" has been a local favorite since the mid-1960s.
PHOTOGRAPH BY @BEARLEADERCHRONICLE

Cruise along Highway 111 in Rancho Mirage, and you’ll spot the pink elephant sign for Rancho Super Car Wash near the intersection of Indian Trail.

The “Elephant Car Wash,” as it’s known, has been a local favorite since the mid-1960s, when cars were symbols of self-expression as much as they were tickets to freedom and exploration.

The business has roots in Seattle, where in 1951 brothers Dean, Archie, and Eldon Anderson invented a hands-free, automated way to clean cars and established their first car wash, using the iconic pink elephant sign.

Randy Barnes, who currently owns the Rancho Mirage car wash with his wife, Lorraine, says the California location was started by Richard Fromme, whose wife was a daughter of one of the Anderson brothers. (There is no affiliation with the Washington business.) Barnes notes that the current flat-roofed midcentury building was designed and built by a company called Hunter Structure. “They used to do a lot of car washes and gas stations in the ’50s and ’60s,” he says.

According to Wash Trends, a national publication for car wash owners and suppliers, the company that made the elephant car wash signs for the Washington locations, Tube Art Display (now Tube Art Group), also created the iconic sign in Rancho Mirage. Fromme brought the sign from Washington.

“The sign represents Rancho Mirage unlike any other,” Barnes says. “I’d say it’s one of the top three icons in all of the Coachella Valley. I love its nostalgia. For older people like us, it makes us think about when we were younger.”

Indeed, the sign is famous. “People visiting the desert from all over the world stop and take pictures of it,” Lorraine says. It has also appeared in magazines and inspired fine art.

Barnes, a car aficionado with a penchant for red Corvettes, had always wanted to own a car wash. After retiring from the food service distribution industry in Portland, he and Lorraine moved to the desert full time in 2005 and bought the car wash in 2008. “We’re the third owners,” he says, “and we take pride in our stewardship.

“I’m there every day during the high season,” Barnes says. “I can’t wait to get up and come to work. It’s like going to Cheers.”