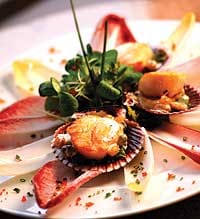 There was a time not so long ago when men wore ties to dinner, when women dressed more like Audrey Hepburn and less like Paris Hilton — when dining out was about the food, the experience, and the destination rather than seeing and being seen. People expected to pay a price commensurate with the quality of the meal they received. You got what you paid for. Today, restaurants open with buzz and aplomb, sometimes trumpeting that they are a throwback to that bygone era — but invariably have little sense of what they are trying to capture.

In the interest of civic responsibility, we offer one word of advice: Wally’s.

For more than a quarter century, Wally’s Desert Turtle has combined attentive and knowledgeable service, dynamic ambiance, and a gourmet menu into a simple recipe for success. “We give customers exactly what they want,” says General Manager Henry Basile. “There’s nothing we won’t do.” Even a peanut butter and jelly sandwich? “We’d have to run to the store,” Basile says, “but we’d get it. That will never change.”

In fact, very little has changed at Wally’s, which is hardly a sign of complacency; rather, it shows that through subtle tweaking, the establishment has been able to flow with changing times. The menu is periodically fine-tuned, and concessions to the market include the discontinuation of lunch. But for the most part, Wally’s is the same as it ever was, save for Basile himself, who has replaced longtime GM Arthur Chardon. Hand-plucked from Hotel Bel-Air in Los Angeles, Basile brings a quiet elegance to the front of the house, and his imprimatur has already been made on the extensive wine list, which features several selections from boutique vineyards in addition to the elegant range for which Wally’s has been long renowned.

French-born Chef de Cuisine Jean-Louis Jalouneix — perhaps the area’s most renowned chef — has prepared the food since the restaurant’s inception. His AAA Four Diamond Award-winning menu — which boasts an extensive Continental mix of influences and more than 20 entrees ranging from fish to beef to poultry (including ostrich) to pastas — reveals why Wally’s has persisted as the dining gem of the desert. The Roasted Half-Duck — which features, in a subtle nod to in-the-know tourists and locals alike, a Medjool Date Sauce — is a classic that still resonates, while the Dungeness Crab & Maine Lobster Ravioli and Pan Roasted Tiger Prawns are oft-replicated dishes perfected under Jalouneix’s hand. Combine those entrees with an appetizer of Seared Foie Gras (served with an apricot pistachio compote, port wine, and an imaginative red currant reduction) and Wally’s signature Chocolate Souffle and you’ll find yourself kissing Mr. Jalouneix’s hand when he visits your table during his nightly rounds.

No tie is required, no off-the-shoulder black dress decreed — but sophistication, like Wally’s, is always in style.