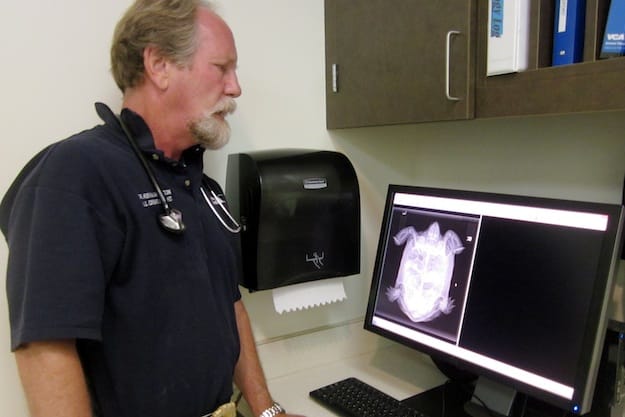 The La Quinta veterinarian is the on-call vet for The Living Desert Zoo and Botanical Garden in Palm Desert, and once had a zebra named after him.

“I like animals better than some people,” Fenton says. “They’re honest and extremely determined.”

Exotics comprise about 20 percent of his practice at the VCA All Creatures Animal Hospital in La Quinta that he opened 21 years ago. He chose the area because it was near the polo ponies.

One unruly horse was not responding well to traditional treatment for muscle strain, so Fenton suggested acupuncture. The owner called it “voodoo,” but his wife asked for it, and the horse showed noticeable improvement.

Fenton earned a veterinary degree from the University of Bologna, where he also learned about alternative medicine.

He has hundreds of pictures of rabbits, bearded dragons, lizards, frogs and other animals on his cell phone, showing their “before and after” treatments.

Ten years ago, Fenton took ownership of Speedy, a desert tortoise, because he had a severe respiratory tract infection, and his owner was overwhelmed by the treatment.

“He had a discharge coming from his nose, and was breathing through his mouth,” Fenton says.

Speedy was immediately hospitalized, put into an incubator, and given antibiotics that would go directly into his lungs.

“Tortoises have rather small, bird-like lungs,” he says.

Now Speedy is 15 years old and lives outside in an old stone barbeque. He should live to be 60.

“They are very wise and beautiful creatures, and very relaxing to be around,” Fenton says.

Besides the tortoise, Fenton owns two dogs, a cat, and a rosy boa named, Feathers. (Watch the VIDEO)

“Snakes need to have a cool and warm place in their enclosure,” Fenton says. “I’ve seen some snakes that were burned by heat rocks and lights.”