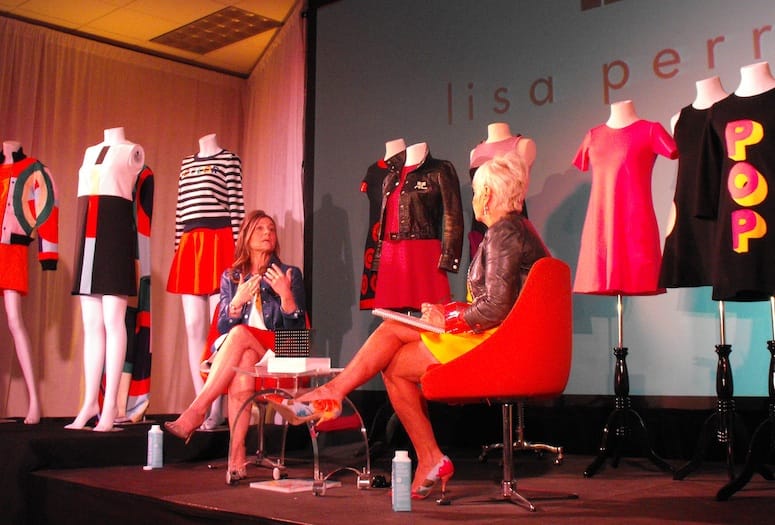 With several lectures focusing on fashion, the schedule of events this year completed a full circle of design – architecture, interiors, landscape, with fashion completing the circle.

The last of the fashion lectures featured designer Lisa Perry with Shari Applebaum, desert fashionista, in a conversation that covered the designer’s background, her inspiration, her practical designs for all body types, and what’s next for her expanding line which also includes home décor. Lisa Perry discusses her new line of dresses and  jackets.

Her whimsical and sometimes humorous designs cover her line of pop-art inspired dresses, jackets, pants and accessories. “You walk into a room wearing a Lisa Perry and you get a smile,” said Applebaum, who is a collector of Perry’s designs.

Perry has licensed artworks of Andy Warhol, Jeff Koons, Roy Lichenstein, and others. “I’ve used mostly the work of 1960s artists,” Perry explained. As a result, her designs have a strong modernist vibe and reflect her love of vintage clothing. Lisa Perry has licensed the art of several 1960s artists for her modernist designs.

“Before I started designing, I wore exclusively vintage, except for an occasional white T-shirt and jeans,” Perry said. “People would stop me and ask me who I was wearing.”

That got her thinking she could design her own original pieces; she now has two stores on the East Coast and is sold at high-end retailers such as Barneys, Bergdorf’s and Harrod’s in London.

As Perry is primarily an East Coast designer, Applebaum asked about her impressions of Palm Springs. “Palm Springs has such a strong brand, the entire place is of this moment. It’s a very, very, very special place in the world.” Six-year-old Dot, visiting for Modernism Week from Australia, wants to be a fashion designer.

• Christopher Kennedy is in the House

• Factoring in Gender to Interior Design