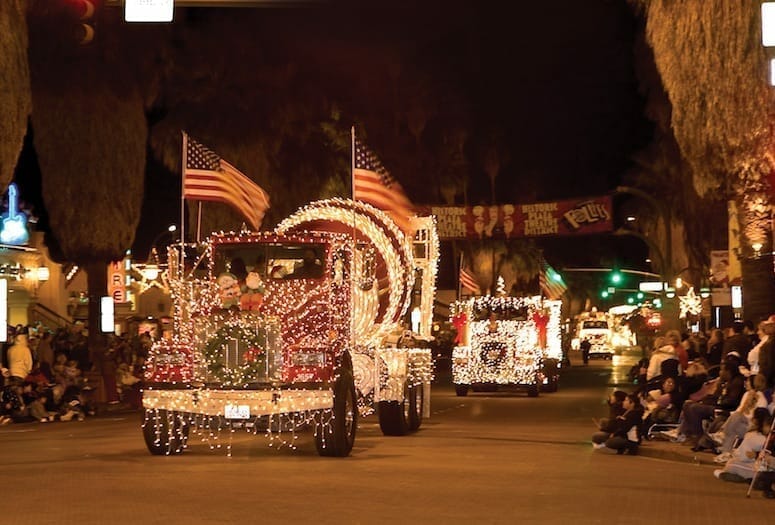 Festival of Lights holiday parade makes its return in 2021 after a year off due to the pandemic.
PHOTOGRAPH BY GERRY MACEDA

Since 1993, the annual Festival of Lights parade has transformed bustling Palm Canyon Drive into a twinkling winter holiday fantasia the first Saturday of December. Beginning on Ramon Road and winding north to its stopping place at Tamarisk Road, the street becomes a showcase for an unforgettable lineup of eye-popping floats, local performers, and holiday spirit.

This extravaganza, hailed as the biggest holiday light parade in Southern California, was created by William Kleindienst, an architect and resident of Palm Springs who served as the city’s mayor and developed a reputation for crafting visually stunning float designs while in high school.

At the inaugural event, Kleindienst incorporated a pink Cadillac he designed for a family friend. Over the years, the parade’s entrants have become much more elaborate, including a rendition of King Kong roaring at spectators from a jungle-themed float and the Budweiser Clydesdales clomping down the street. The most beloved? Mr. and Mrs. Claus, of course, who cap off the parade with their arrival. psfestivaloflights.com

Each year, the Festival of Lights names a celebrity grand marshal. In recent years, stars like Suzanne Somers, Lisa Vanderpump, Beverly Johnson, Lorna Luft, and Tony Hawk have been among the famous faces to lead the procession.

• READ NEXT: Greater Palm Springs Boutique Owners Have Holiday Gift Ideas for You.