Frank’s swinging bachelor days ended in 1976 when he said “I do” to his fourth wife, former showgirl Barbara Marx, who had been married to Zeppo Marx.
PHOTOGRAPH BY PALM SPRINGS LIFE ARCHIVE

I like to visit Frank. For years, I’ve made a point, on my way out of town, to swing by Desert Memorial Park and just say hi. Sometimes I don’t even get out of my car. I’ll park in the shade of a wind-swept tree and watch the devotees, men and women, young and old, who pat the sun-scorched grass, present a tribute of a few dimes or maybe a bottle of Jack Daniel’s, and lovingly run their fingers over the etched words on his weathered marker: The Best Is Yet To Come/Francis Albert Sinatra/Beloved Husband & Father.

At least that’s what it used to say. In January, I noticed his gravestone had been changed. It’s all shiny and new now. No more Beloved Husband & Father. And the best, evidently, is not coming. That’s gone too. Now it says Sleep Warm, Poppa.

Odd. Why would someone replace the marker his wife, Barbara, had so carefully selected, a marker that would be replicated almost exactly to mark her own burial right next to him when she died in 2017? Barbara, it seems, will forever be a Beloved Wife & Mother. But Frank is … what? Tucked in? Keeping warm?

Curious about the change, I called Kathleen Jurasky, the exceedingly polite and professional district manager of the cemetery where Frank Sinatra is buried. Did she have any idea why Frank’s marker was changed out, I asked. She did. Could she tell me about it? She could not. “I don’t want to get in the middle of what happened,” she told me. Wait. Something happened? “Listen, you should talk to the daughters, Nancy and Tina,” she said. “Or the police.” 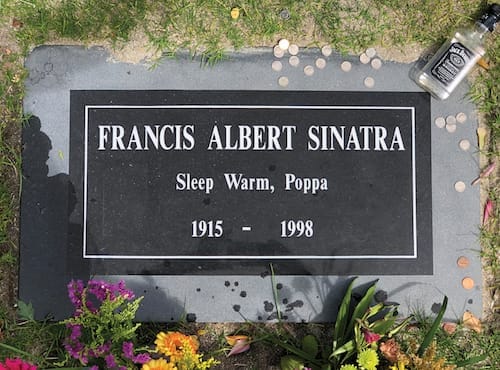 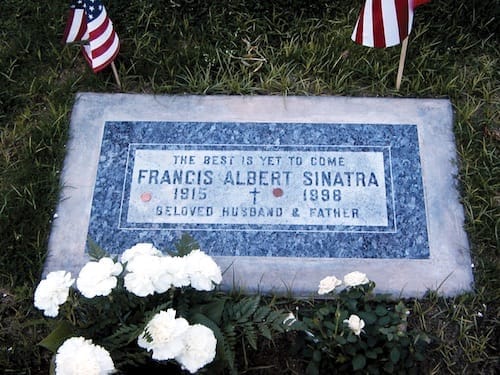 The police? Why should I talk to the police? Obviously, something happened to Frank’s grave marker. But what? So I filed a Freedom of Information Act claim with the Cathedral City Police Department asking for all official police reports having anything to do with Desert Memorial Park in 2020. A few days later, I received a detailed report noting 12 events at the cemetery last year, from trespassing to “Disturbance/Other.” Four of the cases had been redacted. I called Rick Sanchez, an equally exceedingly polite and professional sergeant with the Cathedral City Police Department, who told me there were reasons why some of the information I requested had been redacted and he wasn’t at liberty to share anything more with me. “Maybe there was an incident at the cemetery and nobody filed a police report,” he told me. “You should contact a cemetery administrator.” When I explained that I already had, he said there was nothing else he could do. “If something happened, it’s up to them to tell you.”

So, thinking that Jurasky had had enough of me, I asked Palm Springs Life’s editor to file a request for public records with the cemetery. I told him all I wanted to know was two things: Who had authorized the change to Frank Sinatra’s grave marker and when was it done?

Frank Sinatra died in Los Angeles at age 82 late in the evening on May 14, 1998. By all accounts, it was not a good death. The man known by the entertainment industry as the Chairman of the Board (a sobriquet that originated from the fact that Sinatra founded his own record label, Reprise Records, in 1960) spent the last few years of his life afflicted by heart and lung problems, depression, cancer, and dementia. 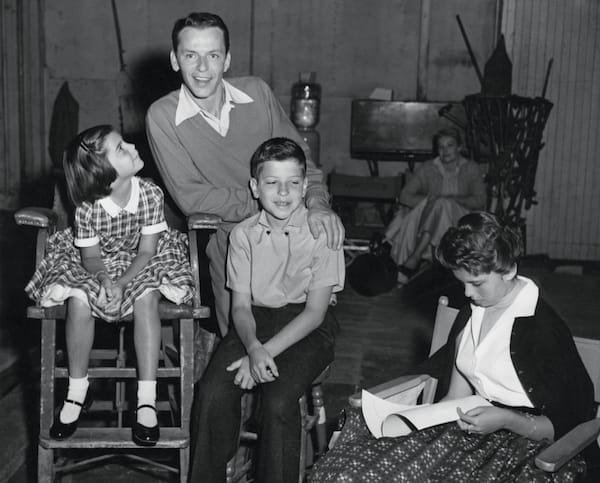 PHOTOGRAPH BY HULTON ARCHIVES/GETTY IMAGES
Frank Sinatra with his children Tina, Nancy (right) and Frank Jr. on the set of the film The Tender Trap, circa 1955.

The evening of his death, complaining of shortness of breath, his lips turning blue, he was rushed to Cedar-Sinai hospital, where a medical team worked furiously on him for almost an hour and a half. He passed, officially of a heart attack, at 10:50 p.m. A half hour later, one of his doctors thought to call Tina Sinatra to notify her of her father’s death. Tina went into shock. How could this be, she wondered? Why, if he’d been alive at Cedar-Sinai for almost two hours, hadn’t Barbara called her or her sister, Nancy, both of whom ived only minutes away from the hospital? The doctor didn’t know.

Recalling the event, Tina wrote in her memoir, My Father’s Daughter, “I believe the omission was deliberate. Barbara would be the devoted wife, and then the grieving widow, alone at her husband’s side.”

There’s no way to sugarcoat this: Frank Sinatra’s daughters, Tina and Nancy, did not like Barbara Sinatra. You know how the Cinderella story goes, how there’s an odious stepmother who is cold, cruel, and jealous of Cinderella’s charm and beauty? Well, that pretty much sums up how Tina and Nancy felt about Barbara. In her memoir, Tina expresses outrage over a long list of grievances, some petty, like her father buying his new wife a Rolls-Royce Corniche for her birthday, and others a bit more shocking — like Barbara’s scheme to convince her husband to adopt her adult son, Bobby (who had already been adopted once by Barbara’s second husband, Zeppo Marx). As Tina says, “This makes no sense — who adopts a 25-year-old man? Won’t he be embarrassed? Or did he get a new name each time Barbara snared a husband?” 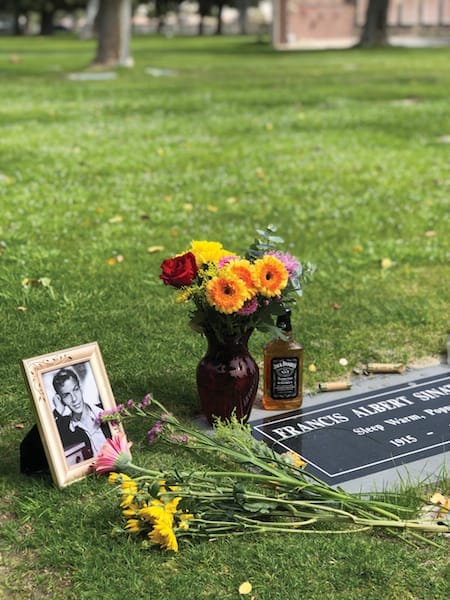 PHOTOGRAPH BY STUART FUNK
In her memoir, Sinatra’s daughter Tina accused Barbara of erasing his history.

The girls put their feet down. The adoption was a stupid idea that needed to die. And, in the end, that’s what happened. But the line had been drawn. “The adoption was her shot across the bow,” Tina says of her stepmother. “It was the first sign that she’d go to great lengths to put herself and her son on an equal footing with Dad’s family. I found it gratuitously hurtful, and stupid, but most of all frightening. I didn’t think Barbara would be content to be Dad’s fourth wife; she wanted to be perceived as the only wife he’d ever had. She would control my father’s future by erasing his history. Which meant erasing Mom, and my siblings, and me.”

In a letter sent to Palm Springs Life following our request for public records, Jurasky says, among other things, that “Although the District does possess and retain the kind of document you are requesting,” they’re not going to give them to me because “the public interest served by not disclosing the record clearly outweighs the disclosure of the requested record.” In short, you don’t need to know so we’re not going to tell you.

Have you ever wondered what Cinderella’s stepmother would have to say if the story was told from her point of view? Maybe Cinderella wasn’t as charming and beautiful as she had everybody believe. Maybe she was egotistical and short-tempered and refused to help out around the house. Maybe, in fact, Cinderella was the mean and nasty one all along. Who’s to say? We’ll never know because Cinderella’s stepmother didn’t think to write down her side of the story.

Barbara Sinatra, however, wrote her own memoir, Lady Blue Eyes, a few years before her death. And what did she have to say about Nancy and Tina? Absolutely nothing. It’s like they didn’t exist. In a witty interview with The New York Times Magazine in 2011, the writer notes that in the book she names every King Charles spaniel she and Frank owned “but you don’t mention his two daughters, with whom you’ve famously feuded.”

I didn’t have the feud, says Barbara. The writer persists: You feel as if they had the feud? “Well, it obviously wasn’t me, so it had to be them, right?”

Sometimes the best way to change a storyline is to deny there is any story to tell.

I reached out to lawyers and representatives for both Nancy and Tina Sinatra, telling them I’d like to talk to them about their father’s grave, but received no reply. I also contacted Nancy’s two adult children. Amanda Erlinger, Nancy’s youngest daughter, did not respond. Her sister, AJ Lambert, who recorded several covers of her grandfather’s songs in her debut album a couple of years ago, sent me an email: “Thank you for writing. AJ respectfully declines this request.”

It seemed nobody wanted to talk about “the incident,” whatever it was. Not the cemetery, not the police, not Frank’s daughters, not his granddaughters. No one. I was at the end of the line. And then out of the blue I got a somewhat cryptic note from someone who has been connected to the Sinatra family for over 45 years and knows, literally, where all the bodies are buried. Someone who, as they say, is a credible source, who knew the details about “the incident” but refused to go on record. These are sensitive matters, after all, I was told. And here is all this person, who was very saddened by “the incident,” will say: Sometime over the Thanksgiving holiday last year, someone took a blunt instrument — perhaps a hammer? — and intentionally damaged Frank Sinatra’s grave. To be specific, they tried to chip out the word Husband from the granite marker. Subsequently, the marker had to be replaced. And with the new marker, words were deleted — like The Best Is Yet To Come and Husband — and other words were added: Sleep Warm, Poppa. That is all this person will say. They will not name names or go into any more detail. It’s a shame but it’s over and done with and that’s that. End of story.

If you want to know just about everything there is to know about Frank Sinatra, you couldn’t do any better than closely reading Tina Sinatra’s memoir, which she updated in 2015 to commemorate the 100th anniversary of her father’s birth. She writes about his difficult childhood, his eccentricities — like the fact that he always carried 10 dimes in his pocket “so he’d never be caught short at a pay phone” — and what she considers to be his disastrous marriage to Barbara, the woman buried next to him. On the last page of her lengthy memoir, she describes how, in the days right after her father’s death, she often felt lonely and sad and would turn on her television, where she knew she would always find him, tap dancing with Gene Kelly or singing his signature closing number, “Put Your Dreams Away,” which, she says, “sounded like a lullaby to me.” Curled up in her father’s robe, smelling his scent, she’d smile at the sound of his voice and remember how before he was buried, she slipped a white envelope in his suit pocket that contained 10 dimes and a personal note from her: Sleep warm, Poppa — look for me.

After all, as she reminds us several times throughout her book, she is indeed her father’s daughter.

• READ NEXT: Why Palm Springs City Hall Belongs in an Architectural Book.